In The Handmaid’s Tale Margaret Atwood puts across the sense of mystery, things that were once there but are no more. She talks about ‘the pungent smell of sweat, shot through with the sweet smell of chewing gum and perfume’ which came from the girls who once watched the basketball matches that were ‘formally played there’. In the first section of this book we get the feeling that the character is quite lost, lost in what once was and not in the here and now.

Don't use plagiarized sources. Get your custom essay on
“ English – comparing 1984 & The Handmaid’s Tale ”
Get custom paper
NEW! smart matching with writer

She tells us about the dances that ‘would have been held there’ and the lingering music that she could still hear very faintly. We get the feeling that this women has very little, no personal belongings, no wealth; nothing.

The fact that the women in this building were not even allowed to exchange names tells the reader that this is some kind of prison, the women have no freedom they are constantly being watched by the ‘Angels’ likewise in Nineteen Eighty-Four written by George Orwell there is a significant similarity between the ‘Angels’ in The Handmaid’s Tale and the Posters in Nineteen Eighty-Four.

The Angels watch over the women and in Nineteen Eighty-Four the poster which is described as a ‘one of those pictures which are so contrived that the eyes follow you about when you move.’ Watch over everyone who passes by it. Beneath it the caption read ‘BIG BROTHER IS WATCHING YOU’ giving off the impression that someone, somewhere is watching this middle aged man.

The man described on the poster some might say could only be the description of Hitler; ‘a man of about forty-five, with s heavy black moustache and ruggedly handsome features’ Winston also tells us that the posters were ‘plastered everywhere’ also revealing, like The Handmaid’s Tale that nowhere is safe. Adding to this is the telescreen, which cannot be switched off again may be a sign that someone or something is always watching you, and that you are never alone. Both the Angels and the Posters in these books are very intimidating figures or ‘objects of fear.’

The Angels did not look or talk to the women just stood with their backs to them to show domination. Correspondingly the ‘enormous face, more than a metre wide’ plastered on the walls with the eyes that followed you when you move is also seen as a sign of domination. The two figures show signs of both aggression and great importance, the fact that the Angles will not talk or look at the women tells us that they are seen as more significant than them. In addition to this the fact that there are so many of these posters and the fixating look on the enormous face also shows great discomfort and stress. 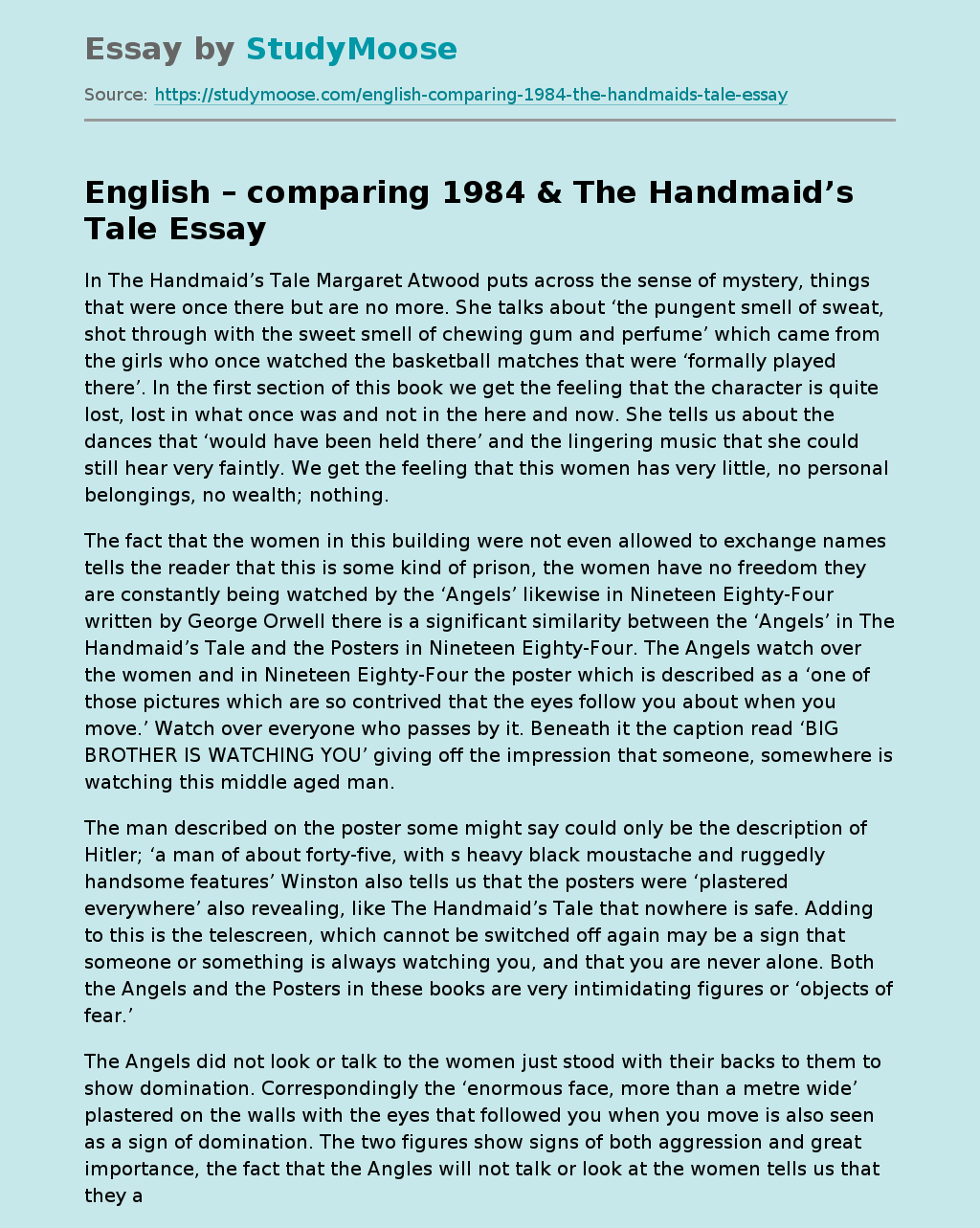