“These stories are all about escape and how characters are unable to escape.”

In the light of this quotation, I am going to discuss Dubliners, with close detailed reference to two of the stories, “Eveline” and “The Boarding House.”

There are many similarities between these two stories, as well as contrasts. In “Eveline,” her father is a drunkard and is also the head of the house, whereas in “The Boarding House,” Polly’s father, “was a shabby stooped little drunkard” who lives separated from his family.

Don't use plagiarized sources. Get your custom essay on
“ English and English Literature Coursework Dubliners ”
Get custom paper
NEW! smart matching with writer

Polly’s father has been cut-off from her life, and Eveline’s mother is dead. The similarity here, is that each child has had one of their parent’s cut off from a period of their life. Eveline wants to escape to Buenos Aires, to get away from her poverty in Dublin. Mr Doran wants to escape from the prospect of marriage. This brings us to one of the main points of the book, the characters inability to escape.

Eveline has been given the chance to escape from her life, where “she had to work hard both in the house and at business.” Poor Eveline, however, finds that she is unable to move forward. She lacks the courage and strength to make that leap that will free her of her oppressive situation. . She’s sees her lover as a possible source of danger: “All the seas of the world tumbled about her heart. He was drawing her into them: he would drown her.” Instead of an uncertain but hopeful future, her paralysis will make a certain and dismal future that may well repeat her mother’s sad life story.

In Mr Doran’s case, the theme of powerlessness is conveyed his situation.

As with many other characters in Dubliners, various social pressures, like his job and his reputation, combine to rob him of choice. Mrs Mooney wants her daughter to escape her current poverty and the possibility of a working life for marriage, while Mr Doran wants to escape the tying down of marriage and enjoy his ‘free’ life. Mr Doran nonetheless cannot escape. At the end of “The Boarding House”, “Mrs Mooney tells Polly, “Come down, dear. Mr Doran wants to speak to you.” The reader is struck by the tremendous irony of the situation, since it is clear that Mr Doran does not really want to speak to Polly. He has been bullied and terrified into proposing marriage to her. These simple words are the hallmark of Mrs Mooney’s accomplishment.

Frank wants to take Eveline away, but Eveline is unsure. “It was hard work-a hard life-but now that she was about to leave it she did not find to a wholly undesirable life.” Polly wants to settle with Mr Doran, but Mr Doran is unsure, however he does not have a choice: “What could he do now but marry her or run away? He could not brazen it out.” Mr Doran has the choice to run away, but this is not an option for “Dublin is such a small city: everyone knows everyone else’s business.” Both Frank and Mr Doran can be seen as saving the two girls from poverty. Mr Doran and Eveline are both described as helpless. Mr Doran himself says, “I felt helpless,” while Eveline is described as “passive like a helpless animal.”

At the end of each story, an iron railing is mentioned. Eveline “gripped with both hands at the iron railings,” using them as an anchor, preventing her from drowning into the seas of the world. The railings help Eveline think of thoughts which keep her from leaving. Polly uses the iron railings as an anchor to clear her thoughts. “There was no longer any perturbation visible on her face.” Both Mr Doran and Eveline feel that it is their duty to stay and face the consequences. Mr Doran “longed to ascend through the roof and fly away… yet a force pushed him downstairs step by step.” Eveline finds that she is paralysed by the needs of her father and her promise to her mother “to keep the home together as long as she could.”

“Eveline” starts a series of stories dealing with various kinds of marriage and courtship. In “Eveline,” marriage presents the possibility of escape. “The Boarding House” gives us marriage as a social convention and a trap. “Two Gallants” reduces marriage and courtship to its animal. “Two Gallants” gave us men taking advantage of a young woman. “The Boarding House” gives us a more respectable social setting, but the basic cynicism about love and relationships between the genders remains. The economic conditions are also expressed in “Eveline” and “The Boarding House”. To save money in “The Boarding House,” pieces of broken bread are collected to help make Tuesday’s bread-pudding. The sugar and butter is kept safe under lock and key.” In “Eveline,” there is an “invariable squabble for money on Saturday nights.”

Eveline is forced into making her decision to stay by duty to her family. Mr Doran has put himself into his situation and it driven further by Mrs Mooney. Both Eveline and Mr Doran have occupational restrictions. Mr Doran “had been employed for thirteen years in a great Catholic wine-merchant’s office and publicity would mean the loss of his sit.” All his hard work would be gone for nothing. Eveline, however, is oppressed by her employer and “would not cry many tears at leaving the Stores.”

One of the striking elements of “The Boarding House” is Mrs Mooney’s silence. Her daughter’s respect is not really a concern, because she knows about the affair from the start. What matters to her is trading on her feigned outrage to get a social arrangement that will benefit her daughter. Mrs Mooney manipulates the weaker Mr Doran, using his concern for his job and his fear of scandal. The story concludes with the fact that Mr Doran has spoken to Mrs Mooney and now wants to speak to Polly. This probably suggests a proposal of marriage, and the trap is implied in the final line: “Then she remembered what she had been waiting for.”

Marriage is the price which Doran must pay in order to keep his job, since “Dublin is such a small city: everyone knows everyone else’s business”

The stages-of-life structure continues in “Eveline”. In previous stories like “The Sisters” and “Araby”, children had been main characters. Eveline is an adult, a young woman old enough to get married. Joyce gives us the terrible poverty and pressure of her situation. The weight of poverty and family responsibilities bear down on this young woman heavily and her financial situation is far worse than that of the three boy narrators of the previous stories. She is trapped in an ugly situation, responsible for her siblings and the aging father who abuses her.

In conclusion, it can be said that Joyce presents the themes of escape and paralysis in Dubliners. They show how Joyce sees the city of Dublin. 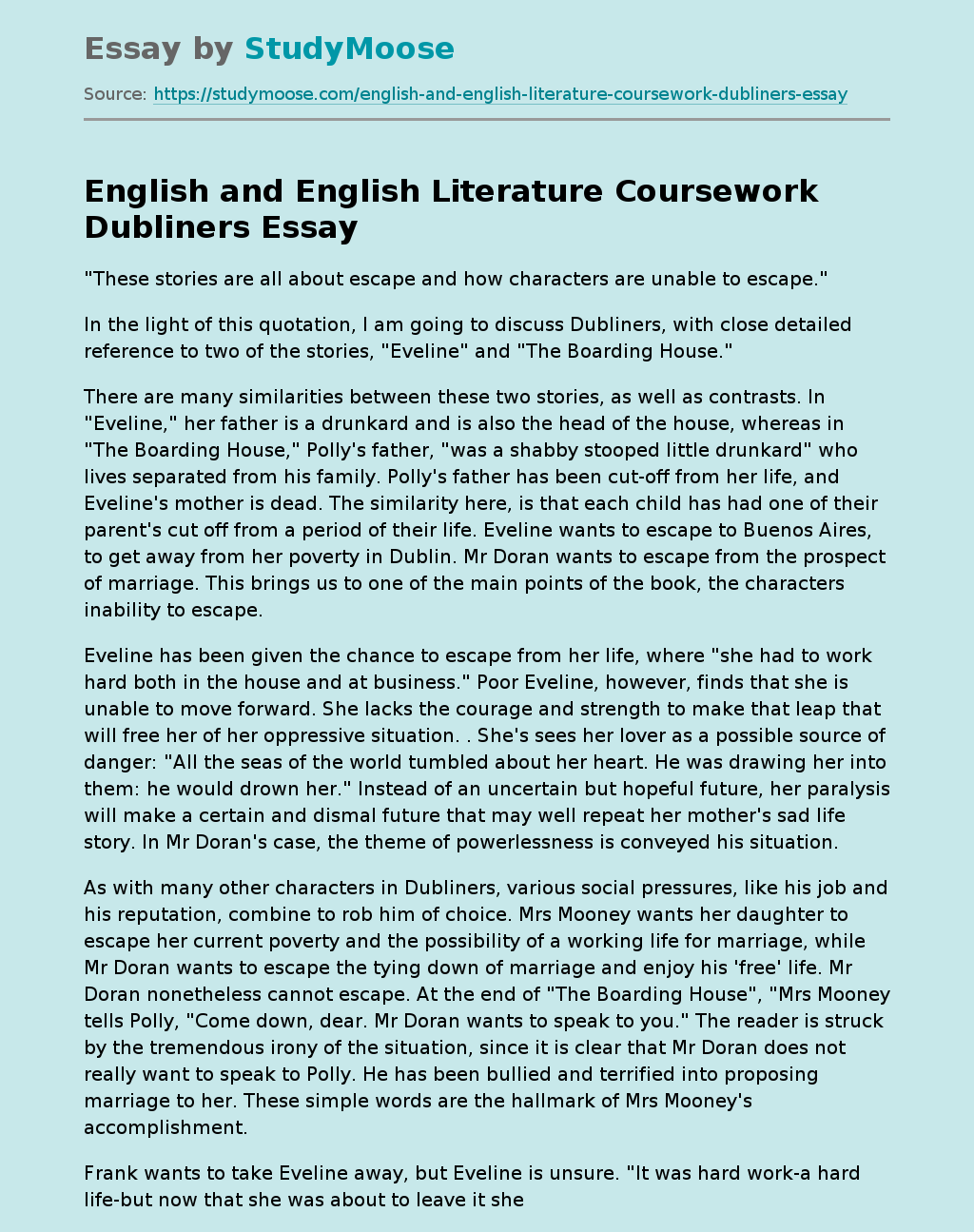