England During Victorian Era in a Novel David Copperfield

Examines the novel “David Copperfield” by Charles Dickens, focusing on life in England in Victorian times

The novel David Copperfield, written by Charles Dickens, deals with the life and times of David Copperfield. About a century ago in a small town in England, David was born on a Friday at the stroke of midnight, which is considered a sign of bad luck. David’s father has already died and his aunt comes to stay with him and his mother as this novel gets off to a very slow start.

Don't use plagiarized sources. Get your custom essay on
“ England During Victorian Era in a Novel David Copperfield ”
Get custom paper
NEW! smart matching with writer

Soon David becomes aware that his mother has relations with another man and asks one of his servants, “if you marry a person, and the person dies, why then you may marry another person, mayn’t you?” David is immediately angered that his mother has betrayed his father and goes off to live with his aunt. A while later, David goes back home but quickly gets into trouble and is sent off to school.

Dickens uses excellent description in his telling of this story and the reader can easily relate to the characters. The setting of a small town in England is standard in all of his novels, including Great Expectations. The reason for this Dickens’ setting is because he was born in the town of Portsmouth, England in 1812.

Although as a young child he moved to Chatham where he experienced a pleasant childhood in which many scenes from his childhood are intertwined throughout his novels. Dickens father was constantly in debt and was eventually sent to jail.

This memory was agonizing for young Charles as years later he wrote: “No words can express the secret agony of my soul. I felt my early hopes of growing up to be a learned and distinguished man, crushed in my breast.” This directly relates to Dickens discussion of David in a wine house later in the novel.

A couple of years later, Dickens attends school at the Wellington House Academy where he fell in love with Maria Beadnell but her father opposed the marriage and nothing became of it. David Copperfield is more of a biography of Dickens life made into fiction than of just a regular story about a boy. Dickens writing skills are apparent as he ties chapters together in an easy to understand novel where the writing seems to move along swiftly. Dickens work is rich with metaphors and enjoyable to analyze as in statements such as, “he eats at one gulp exactly like an elephant.” This book is a classic and may be considered his best work. There are times when the novel moves slowly, but the positives outweigh the negatives and David Copperfield is a book for everyone.

That summer after returning from school he finds his new baby brother, and doesn’t exactly know what to think of the situation. He soon must leave again for school but is actually happy for his mother. He and his mother did not get along, and David knew that he would never see her again. She dies soon afterward, and although they did not get along, David takes her death with much grief and sadness. Soon David sets off to Miss Betsey’s house, an old friend, and again Dickens’ description is brought out as David is described as being, “a dusty, sunburnt, half- clothed figure.” The novel is gradually picks up flavor and humor as David’s aunt, Miss Trotwood, is described. A parallel to his life is drawn here when he finds out that his previous guardian was put in jail because of unpaid debts.

After not being able to find his aunt he stays with a doctor and becomes fond of the daughter Agnes. As David is introduced to his teacher, the plot starts to take a light-hearted, humorous twist. Thus the boring introduction is forgotten and Dickens graceful style is brought out. David eventually meets a young girl named Dora and marries her at the age of twenty one in which time he becomes a successful writer. About a year passes and he starts to have troubles with his marriage, but his writing becomes more successful every day. David is soon expecting a baby and he hopes that it will “make more of a woman” out of Dora, for she is a poor wife. Sadly though, the baby dies soon after it is delivered. Soon after, David gets a letter which says it is urgent to meet at his aunt’s house.

The letter worries him because he thinks Emily, his childhood love, is dead. But when he goes, he soon realizes that Emily is alive and overhears a conversation she is having with a lady. David then hears the tale of how Emily disappeared. Soon after, his wife dies as does Emily’s husband. But David is too distraught to take action and leaves the country for three years, during which time his books gain much popularity. When he returns the exciting climax of the novel is brought out through Dickens classic style.

Throughout the novel, there is no set antagonist that Dickens uses. Mr. Murdstone, the man that David’s mother marries could be classified as the antagonist because he often beats David and drives David’s mother to an early death. Because this novel is more of a biography of Dickens life it is hard to find a certain person that goes against David, however, the man that marries his childhood love could also be classified as the antagonist.

Again there is no set theme to the novel because of its biography form. Although a theme throughout David’s life could be to take advantage of the situation and if you see something you want, grab it, do not hold back and your life will prosper because of it. As the book ends, Dickens wraps up the novel disposing of all of the characters in the book. This is basically Dickens “anti-climatic wrapping up” portion of the novel in which he does at the end of all his books. Overall, this book displayed humor at times and sorrow at times but was fluent in style and a fun book to read.

England During Victorian Era in a Novel David Copperfield. (2020, Jun 01). Retrieved from https://studymoose.com/england-during-victorian-era-in-a-novel-david-copperfield-essay 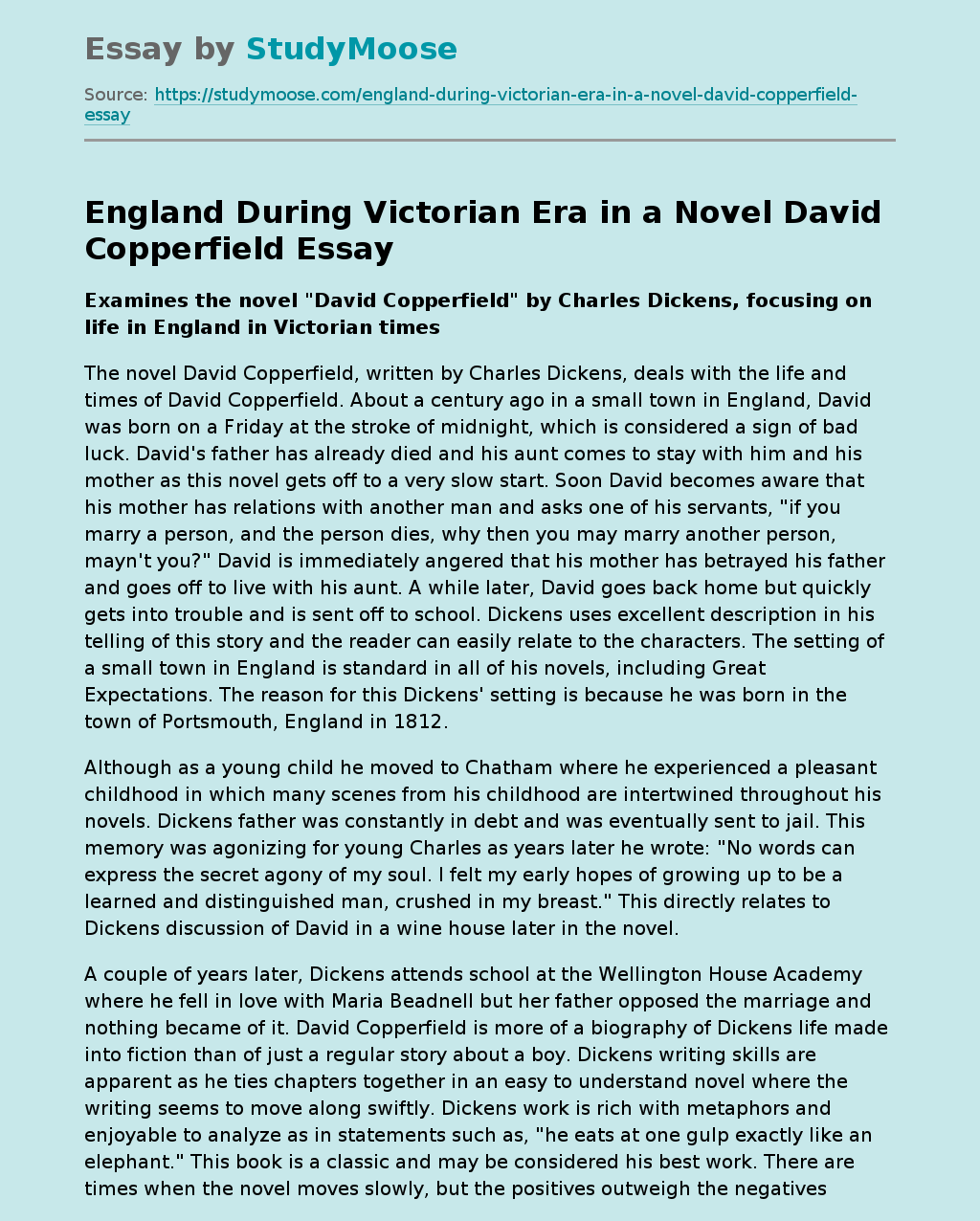