Children develop many different types of skills, cognitive skills such as language and thinking are learned in a variety of activities that involve math and science. Math and science may not look like a subject taught at a young age, but in the very basic ways, it is shown to be learned. Also, the application of the scientific process is shown in the learning of children and how it used.

Don't use plagiarized sources. Get your custom essay on
“ Engaging Young Children in Science and Mathematics ”
Get custom paper
NEW! smart matching with writer

These stages were named after psychologist and developmental biologist Jean Piaget who recorded the intellectual development and abilities of children of all ages. The four stages of Piaget’s cognitive development are the following: sensorimotor from birth through 18-24 months, preoperational from 18-24 months through early childhood age 7, concrete operational from ages 7 to 12, formal operational that from adolescence through adulthood.

Through this theory, many children may be advance or as well behind the development, but Piaget insists that cognitive development always follows the sequence because each stage is marked by new intellectual abilities and more complex understanding. Even if it might not look like math and science are involved in the stages of development they are. In all four stages, it is shown for example in the sensorimotor stage is where the children have the ability to link numbers to objects, in the preoperational stage is when the children should engage with problem-solving tasks, a child at this ages who understands that adding four and five gets nine, as we continue the formal operation stage is when the children are capable of forming hypotheses and deducing possible consequences, allowing the child to construct their own math.

Also, in the concrete operations stage is when children utilize their senses in order to know, they can now consider two or three dimensions. For example, in a liquid experiment, the child notices the lowered level of liquids and that shows both the dimension. In each developmental stage, there is a different concept learned and related to math and science.

Now in the application of the scientific process what it is and how it is in the early care and education environment. The need to focus on science in the early childhood classroom is based on the number of factors currently affecting the early childhood community. Scientific knowledge helps explain the world around us. All children have the ability and propensity to observe, explore, and discover the world around them, according to (NRC 2012). The National Science Teachers Association affirms that learning science and engineering practices in the early years can foster children’s curiosity and enjoyment in exploring the world around them and lay the foundation for a progression of science learning K through 12 and throughout their entry’s lives. Also, adults play a central and important role in helping young children learn science as well because they support children’s play and direct their attention, structure their experiences, support their learning attempts, and regulate the complexity and difficulty of levels of information. That how the science process is involved in early childhood care because children explore and observe. Young children need different opportunities to involved in science in exploring and discovering. That is how the scientific process is involved and how it’s used in children’s lives.

Children expand in learning different ways and many skills are learned such as cognitive skills as they learn in a variety of activities that involve math and science. Also, the application of the scientific process is shown in the learning of children and how it used. Science and math are just involved in a child’s life every day all their lives. 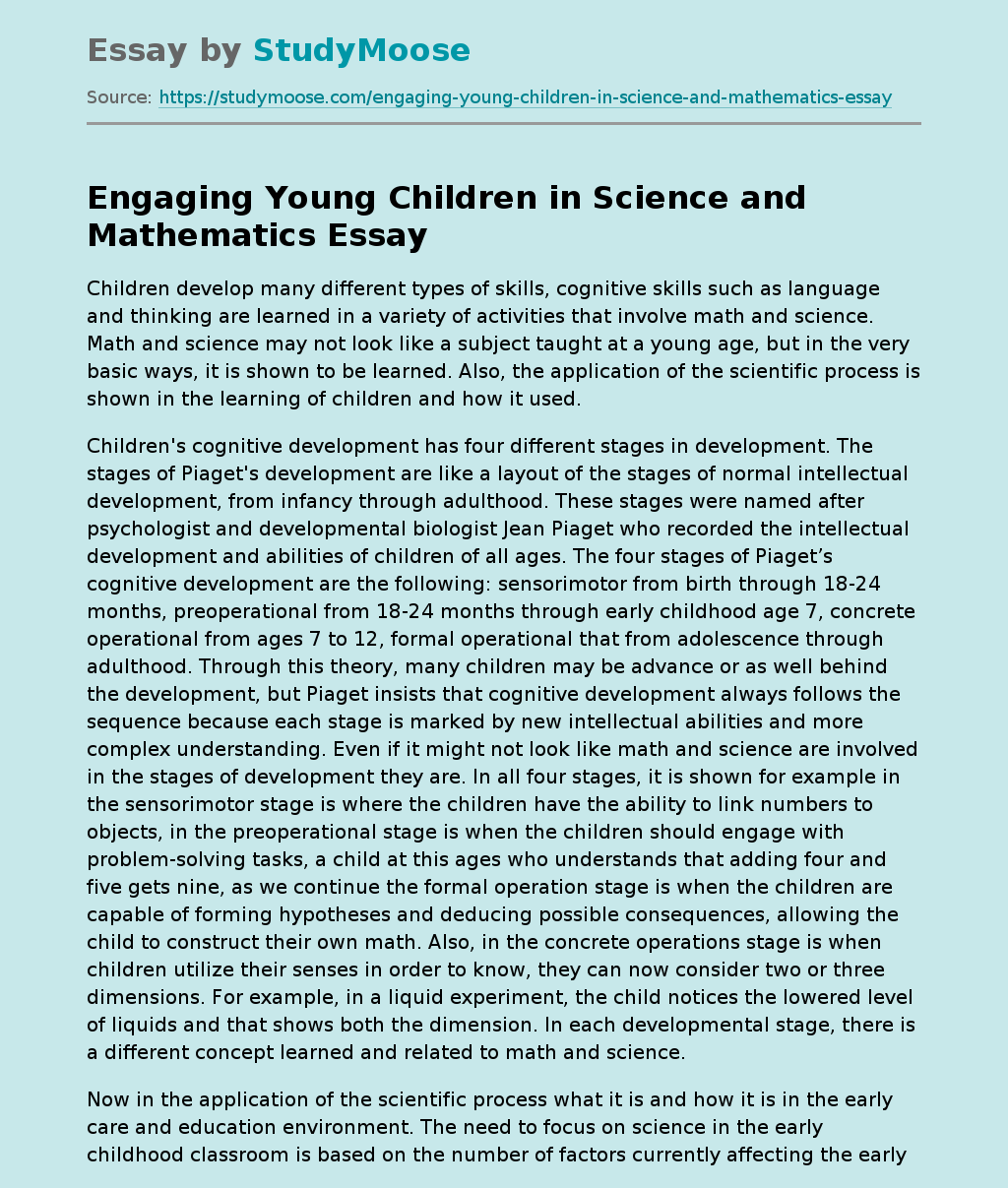