Food is a source of energy intake as it contains carbohydrates; there main function is to store energy in the muscles. Carbs are a macronutrient and come in two different forms, simple which are foods like chocolate and sweets these release energy quickly, the other form is complex which are foods like pasta and rice they release energy slower so are better to keep energy for a sustained period of time. There are certain factors that affect energy intake for instance what gender you are affects how much energy you need, a male’s guideline daily amount is 2500 calories where as a female’s is only 2000 calories.

Don't use plagiarized sources. Get your custom essay on
“ Energy Expenditure, Intake and Balance in Nutrition ”
Get custom paper
NEW! smart matching with writer

Climate is another factor that affects expenditure this is because people in hotter climates lose more energy through sweat than people in cooler climates.

Different nutrients have a differing effect on an individual’s intake because each nutrient releases a unique amount of energy and also the speed the energy is released varies for each one. For instance the macronutrient carbohydrates are the body’s main source of energy intake therefore they release the most energy, but even carbohydrates are split in to two groups when determining the speed the energy is released.

The two groups are simple carbs and complex carbs, simple carbs are foods like chocolate and sweets their energy release is very quick giving you a short sharp burst of energy but cannot be sustained for a long period of time. On the other hand complex carbs which are found in bread, rice and potatoes release the energy slowly over a longer period of time at a more consistent rate.

When talking about other nutrients that release some kind of energy there are only two others, these are fats and protein, fats are like simple carbs releasing only small amounts of energy in quick bursts but their main function for the body is to protect vital organs and provide insulation. Protein is a last resort for energy intake as the energy has to be taken away from the muscles; this is only in rare cases where there are no carbs or fats in the body.

Body Composition is used to describe the percentages of fat, bone and muscle in human bodies. Because muscular tissue takes up less space in our body than fat tissue, our body composition, as well as our weight, determines leanness. Two people of equal height and body weight may look completely different from each other because they have a different body composition.

Fat Free Mass is comprised of the components that have no fat in the human body. It can refer to any body tissue that does not contain fat; these include skeletal muscle, bone and water.

Lean body mass is the mass of the body minus the fat (lipid). Some methods of working this out require specialised equipment such as hydrostatic weighing or DEXA (dual-energy X-ray absorptiometry). Others are very simple such as skin callipers and bioelectrical impedance.

This is a method of measuring body fat percentage by taking measurements of fat at 4 different points of the body using a set of skin callipers, they are taking at the bicep, tricep, waist and subscapular (shoulder blade) doing this finds out your fat layer thickness. These measurements are then converted into body fat percentage using an equation; a male should have around 15% body fat whereas a female should have 20-25% due to them having breasts etc.

Bioelectrical impedance measures the resistance of body tissues to the flow of a small electrical signal. The proportion of body fat can be calculated due to the current flowing through the parts of the body that are made up of mostly of water such as blood, urine and muscle this is not possible through bone, fat and air. By doing this it is possible to work out how much body fat the person has by combining the bioelectric impendence measurement with factors such as gender, age, height, weight, and fitness level.

Hydro densitometry (which is also known as hydrostatic weighing) is weighing someone while they are in water, it is considered to be the most accurate form of measuring body fat. A very large tank of water is used for this test, firstly a comparison is made between the underwater weight and the dry weight of a person. Due to fat being less dense than the other tissues in the body, it floats more easily. The more fat a person has on their body, the greater the difference between the dry and wet weights. While this method of measuring is very accurate and considered the best way of measuring body fat, not many people use this method because the equipment and test is highly expensive.

Looking at a player’s energy intake can also help out the coach in trying to improve his athlete; he can work out whether his athlete is getting enough energy in his diet and whether it has a suitable energy release time. For instance a sprinter may be eating complex carbs like bread and pasta before a race which wouldn’t be suitable as they release energy slowly, the coach can see this and change it to some simple carbs like chocolate as they release energy In a quick short burst which is much more suitable for a 10 second race.

Finally a coach can take into consideration whether his athlete is expending his energy suitably, for example if a football player is going on a 5 mile run before a match the coach can suggest that he reduces the distance as he is wasting energy which he should be saving. Expending too much energy in training can also lead to the risk of injury and fatigue so the coach can keep his training at a suitable level for the athlete he is training.

Energy Expenditure, Intake and Balance in Nutrition. (2016, May 03). Retrieved from https://studymoose.com/energy-expenditure-intake-and-balance-in-nutrition-essay 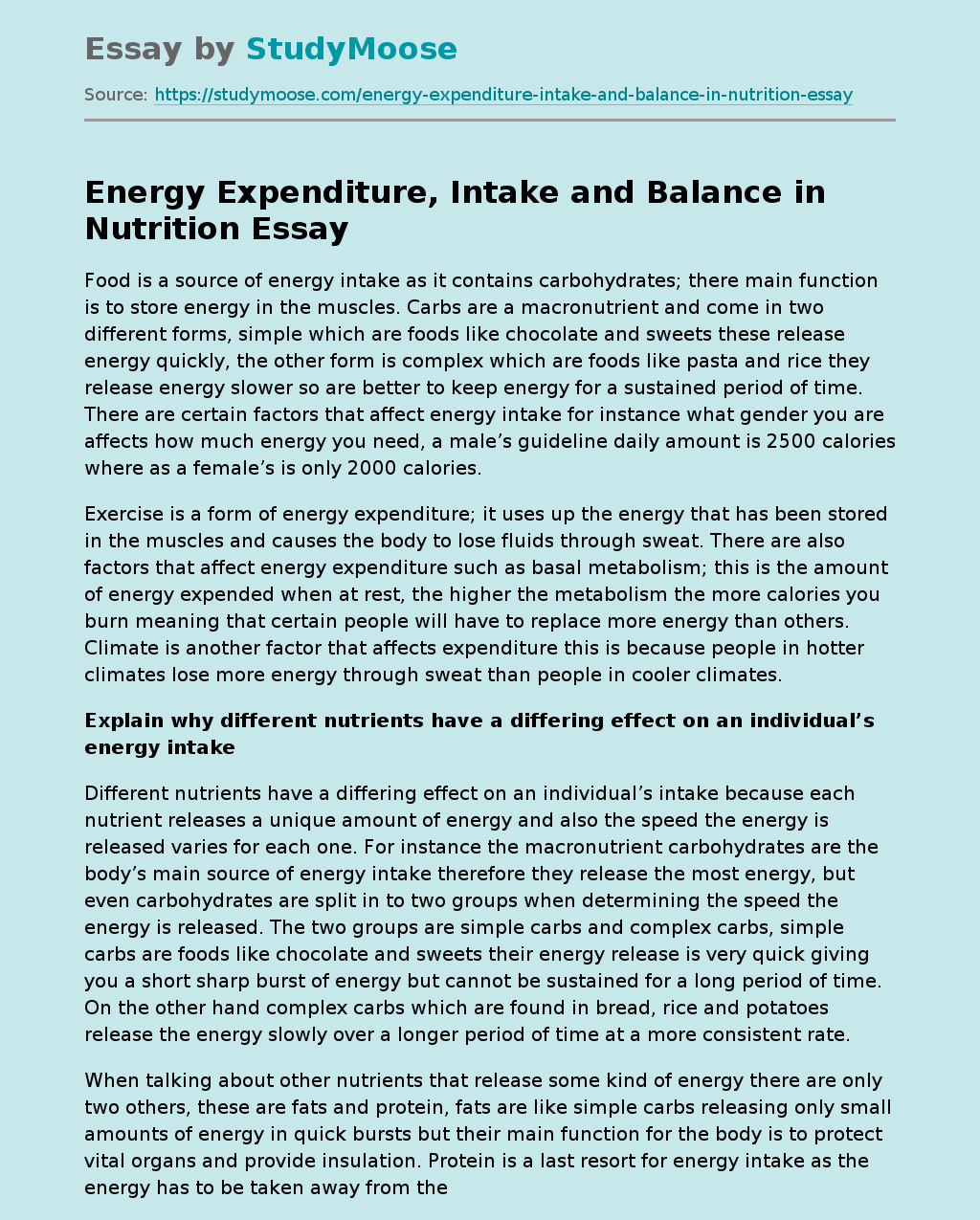