The ending of The Handmaid’s Tale, although is not a satisfactory ending for the reader, suits the novel very well. Its ambiguity follows the same ambiguous themes which we have already seen permeate the whole text. Atwood uses the last sentence of the text “the darkness within; or else the light” deliberately, to continue with the ambiguity, and to act as a device to not actually end the novel, but to keep the reader guessing. The “darkness” and the “light” obviously represent Offred’s death or escape, but we never find out which one becomes of her, so we are continuously left wondering.

Don't use plagiarized sources. Get your custom essay on
“ Ending of Atwood’s Novel The Handmaid’s Tale ”
Get custom paper
NEW! smart matching with writer

The intentions of Nick’s character are never fully understood during the novel, and even at the end we are still unsure as to whether or not he is a genuine character “Nick, the private eye”. When he calls Offred by her “real name” during her removal, this hints that Nick is in fact helping her to escape, and not sending her to her death, as through out the book, she has used her real name as her code for survival, and as a way of clinging on to the past.

Nick’s character can also be linked to that of the commander, who is perhaps one of the most ambiguous characters of the whole book. This linking of these two can also help the reader to recognise the doubles theme, which permeates the whole text.

Offred’s doubts towards Nick, are just another of her many doubts through out the whole novel.

She has always had a very suspicious mind, and this is due to her indoctrination, which makes her suspect that eyes are everywhere “I have no way of knowing”. By realising this, she realises that without knowledge, she has nothing.

Her indoctrination has always been in the back of her mind to remind her that women are the lesser sex in this society, and that they are always expected to fail, just like Offred feels she has failed Cora “I’ve failed her”. This is an ironic statement, because throughout the book, Offred has always placed her hopes in other people, and now she is realising that she has diminished Cora’s hope, “I was her hope”. Offred is clinging on to her final hope, that Nick is in fact part of the Mayday movement like he said, and she has no choice but to believe him, just like ever since she was thrown into the Gileadian society, she has had no choice but to trust everyone around her “I have given myself over into the hands of strangers”.

All of Offred’s life as a handmaid, she has been a prisoner to the society, and now she is being taken out of the society like a prisoner. The van is her final prison, and to the reader it “double doors” will soon close on her life in Gilead. At this point the reader has lost hope in Offred escaping, as there seem to be no visible signs to the reader, only ambiguity, which can be overruled by the text in which the final chapter is written. If Offred had escaped, she would be speaking in past tense, but the speech is in present and future tense, hinting that she was never to escape from her Gileadian prison.

The final paragraph of the text certainly continuous many of the themes, which we have seen, permeate the text. Some of the themes, such as hope, have been reversed and diminished, but it is still present right to then end. The most obvious and the strongest theme from the book is definitely the ambiguity, which Offred, and the reader have to deal with. It strongly present throughout the whole novel, and is at it strongest point at the end of the text. The ending is very appropriate to the novel, and Atwood uses the themes very well right to the end of the text. Although the ending is appropriate to the text, it does not satisfy the readers urges to know hat happens to Offred in the end. 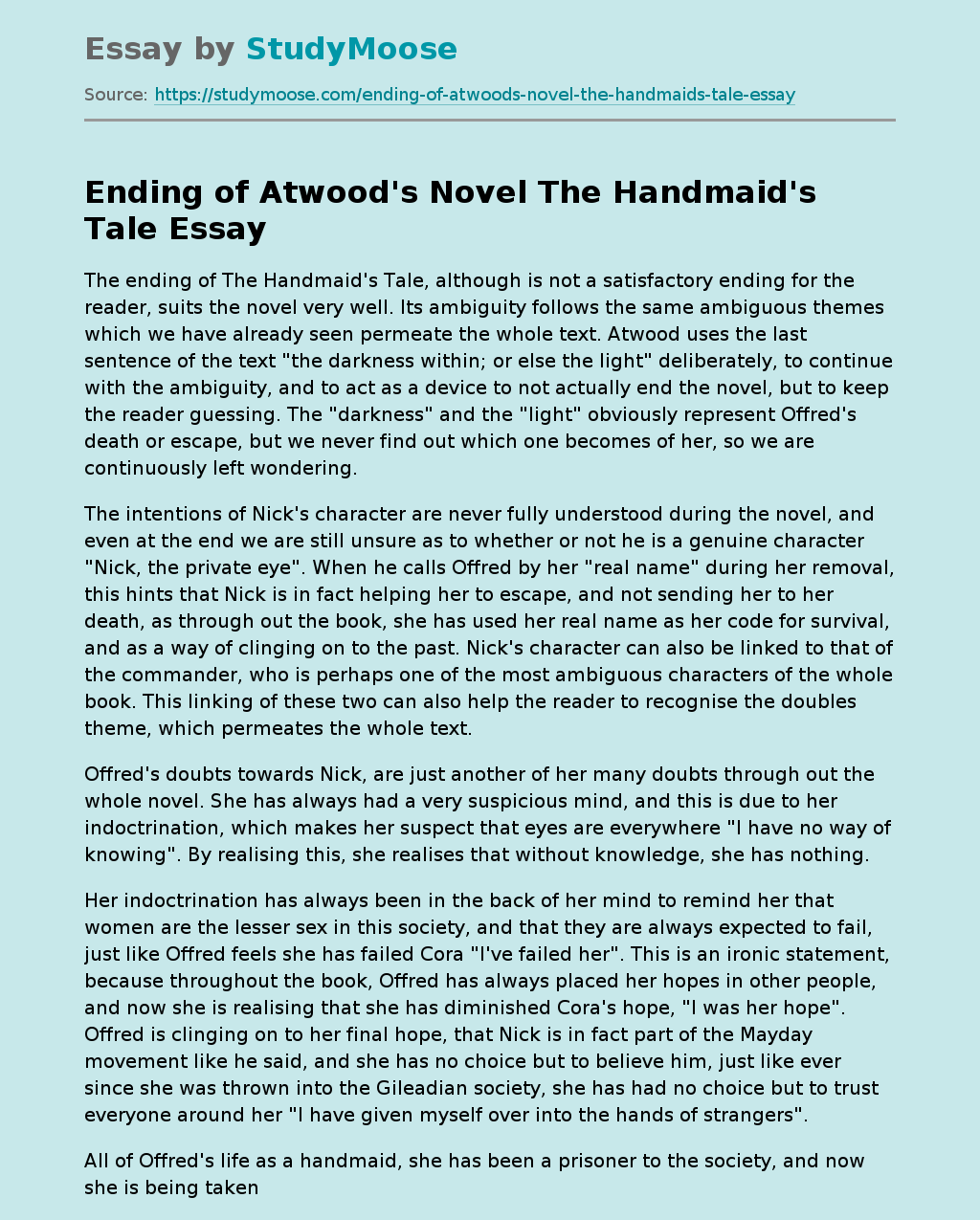