The biodiversity is very important on earth. But in current events, many of the animals started to extinct so this report will show some of endangered land mammals species according to CITES and the protected area and because of the importance of the distribution of these animals for preserving them this report will show the distribution of some of the species and the protected area in the emirate of Abu Dhabi.
And because of the importance of preserving biodiversity this report well presents some solutions and recommendations at the end of it.

Don't use plagiarized sources. Get your custom essay on
“ Endangered Wild Mammals Species in UAE ”
Get custom paper
NEW! smart matching with writer

Firstly CITES is a shortcut for Trade Endangered Species of wile fauna and flora. And because of the interest of the UAE in the environmental issues and in order to protect biodiversity from imbalance and extinction, the UAE had to join the CITES in 1986. Accordingly, Federal Law No. 11 of 2002, Which guarantees the application of the Convention to the country, was issued. Here is the categories of CITES.

Including the most endangered species among all animals and plants contained in CITES that affected or likely to be affected by international trade, therefore created strict regulations for those trading these species, so they don’t remain more on the list of (endangered) except for some exceptional case For scientific research purposes.

It includes all species that are not necessarily currently threatened with extinction but may become so, unless if the trade in specimens is strictly regulated to avoid exploitation of their survival

the species included in the application of the joint party in CITES Types that need the cooperation of other States to prevent illegal and unsustainable exploitation.

International trade in these species is permitted only in case Provide the required permits or certificates.
The Abu Dhabi Environment Agency (EAD) classifies local plants and animals according to the IUCN Red List

According to CITES there are four Species listed under Appendix I and three species are in Appendix II.

From the table we can notice that there are five species of wild mammals are listed under “threatened”, The Arabian Tahr (Hemitragus jayakari) is the only kind that listed as Endangered species (EN), and the other three are listed as Vulnerable (VU). Moreover, three species listed as Near Threatened (NT) and are recorded as Least Concern (LC). Here are some of the Wild mammals and their classification according to IUCN.

Al-Tahar Al-Arabi lives on the wild reserve of Jabal Hafeet And specifically, it lives only on the rugged rocky slopes. From far away it looks like a wild goat but if you see closely you will notice its long hair brown to reddish-brown and dark lines on the back and short horns marked him clearly The greatest threat that faces this kind is the loss of natural habitat due to the development activities in Jabal Hafeet and the increase in the number of stray dogs and goats on the mountain. According to IUCN Red List Al-Tahar Al-Arabi Is recorded as “Endangered”.

The Arabian Mammal is the largest wild mammal based in UAE. It has a hump on its shoulder, long straight horns and a tail end with a hair follicle. It lives in the plains are covered with gravel and may also live in sandy areas. It is mainly found in the Arabian Oryx Reserve (Umm al-Zemul area) and in private collections. this kind of Wild mammals as “Vulnerable” according to the IUCN Red List.

This species lives in sandy habitats. The presence of this species has been recorded only sporadically over the years throughout the Emirate of Abu Dhabi. There are confirmed records of its appearance in the eastern region of Shihan. And also in the Western Region of the Houbara Reserve, it was observed in 2015 after it disappears for more than a decade. This Species is recorded as “Near Threatened” according to the IUCN Red List.

This type of rabbit is one of the most common species we see in desert habitats in the Emirate of Abu Dhabi This type of rabbit is characterized by a variety of colors ranging from pale yellow color such as the color of sand to brown to reddish-brown, while its white underparts. The results show that there are large numbers of these rabbits in the main wildlife reserves of Abu Dhabi. With particularly large numbers in the Houbara Reserve in the western region of Abu Dhabi according to the wildlife tracking cameras shows the IUCN Red List has classified it as “Least Concern”.

This Species spreads widely throughout the region, usually in mountain areas, but its presence in the Arabian Peninsula has become rare. and Due to the lack of previous records for the existence of this kind in the recent past, it has been announced Its extinction in wild areas through the Red List of Major Species in Abu Dhabi. But after 35 of disappearing The Environment Agency – Abu Dhabi (EAD) confirmed its existence again in Jebel Hafeet National Park in Al Ain in 2019.

Causes of extinction of animals in Abu Dhabi

The population growth and the consumer lifestyle negatively affect on the biodiversity. And through the Urban crawl and industrial creeps produce environmental pollution. for example infrastructure, road construction, and plant construction. This leads to increased salinity of the soil, deterioration of vegetation cover, and the disappearance of many species. Especially that in recent years the generation of solid waste and hazardous waste has increased as a result of population activity.

Invasive species are considered one of the most important reasons that expose some species of animals and plants to extinction, Illegal trade in wild species has led to the Entering of many invasive species. Also, some of these invasive species have been from Personal belonging and have fled their owners Such as Rock hyrax which has begun to spread in UAE and it’s competing for food with local wild species. also affect local animals by transferring them to certain diseases that kill Native species and also predate domestic animals. This generally may lead to deterioration in the biodiversity and particularly the wildlife.

Climate change has led to many negative changes and its effects continue, especially on vegetation and animal species. The Gulf region is one of the most regions affected by climate change and The temperature is expected to rise from 2 to 5. 5 degrees Celsius, which means a longer summer and shorter winter and may lead to future unstable weather phenomena. Which means that the species will not adapt to the new temperatures. And this change will destroy the habitat of these species, which will lead to the extinction of them in some areas.

Tourism is one of the most important activities in the UAE, but on the other hand tourism activities have a negative impact on species. Expansion and establishment of tourist facilities using renewable and non-renewable natural resources that destroy animal habitats. moreover, The erroneous behavior of tourists is a cause of extinction of some animals such as Off-road and dedicated driving, Picking plants, hunting, diving, The direct inversion of plants and small animals. While The density of tourists is confused and affects the behavior of animals and their eating habits and these effects can lead to negative changes in the environment of wild animals.

The UAE attaches great importance to the protection of biodiversity in the country and try to manage it properly. It working hard to find solutions that help preserve environmental diversity, Including the enactment of strict laws and the imposition of sanctions, as well as cooperation with environmental conservation agencies. as part of its efforts spending millions of dirhams to establish reserves that help animals adapt to the environment. Where The UAE was ranked first in the area of nature reserves in 2018.As it includes 43 nature reserves distributed throughout the UAE. It is divided into 32 land reserves, 14 marines. There are 23 land reserves in Abu Dhabi.
figure 2 shows the distribution of the protected area in the emirate of Abu Dhabi, the largest protected area is the Arabian Oryx with around 6000 km2, the second largest one is Al Bida’a Protected Area with around 1300 km2, while the third-largest protected area is Al Ghada with around 1000 km2. These largest three reserves are located on the north of UAE. Here is some of the most important protected area.

Al Wathba Wetland Reserve is 40 km southeast of Abu Dhabi city, behind Mussaffah.It was established in 1997 by the late Sheikh Zayed bin Sultan Al Nahyan and is considered the first place to be legally protected. Despite its small size, there is a huge diversity of animals. And includes many species threatened with extinction, which resorted to this place to become a habitat to protect and depend on it to feed and reproduce.

Jebel Hafeet Park is located 150 km east of Dubai and Abu Dhabi. besides, it is one of the tourist attractions in the UAE it is also a nature reserve. It has about 4500 species of animals and 30% of them are endangered. Jebel Hafeet Park is the only mountain reserve in the Emirate of Abu Dhabi.

Al Bida is located in the Al Dhafra area and is considered one of the largest reserves of sand dunes and shrubs. And its consider home to a wide range of desert plant species And sheltering some animals.

Al Dilfaweya Located in the middle of the Emirate of Abu Dhabi, it is one of the most important reserves of biodiversity. It has large populations of animals and plants, especially perennials. It is characterized by huge sand dunes.

Located in Al Dhafra area, over 75% of its area is forest of shrubs, perennials and weeds.

These reserves are considered from the most important reserves for the resettlement and breeding of Houbara, by providing them a suitable environment.

Al Tawi is characterized by the presence of gravel plains, some plants and unique palm farms.
Barqa Al Suqoor Protected Area is characterized by its being the home of the saline coastal marshes known as the Sabkha and the existence of agricultural lands.

Habari Protected Area hosts the largest Houbara resettlement program and is the ideal place for research and development of species. It is the first protected area for Al-Houbara.

Abu Dhabi has become a home to the largest group of Arabian Oryx and thanks to the rulers of the UAE. And these two protected area are characterized by the existence of the Arabian Oryx.
The Arabian Oryx Protected Area is characterized by the existence of the Arabian Oryx in large quantities after the declaration of its extinction in the land in the seventies then it was classified as endangered in 2011. Currently, more than 800 species of animals are excest in there and it considers one of the most areas that has a wide range of mammals.
While Qasr Al Sarab Reserve, a two-hour drive from Abu Dhabi, its Nature is full of life because of the diversity of animal and plant species and there are more than 30 species of animals, including 10 kinds of mammals. 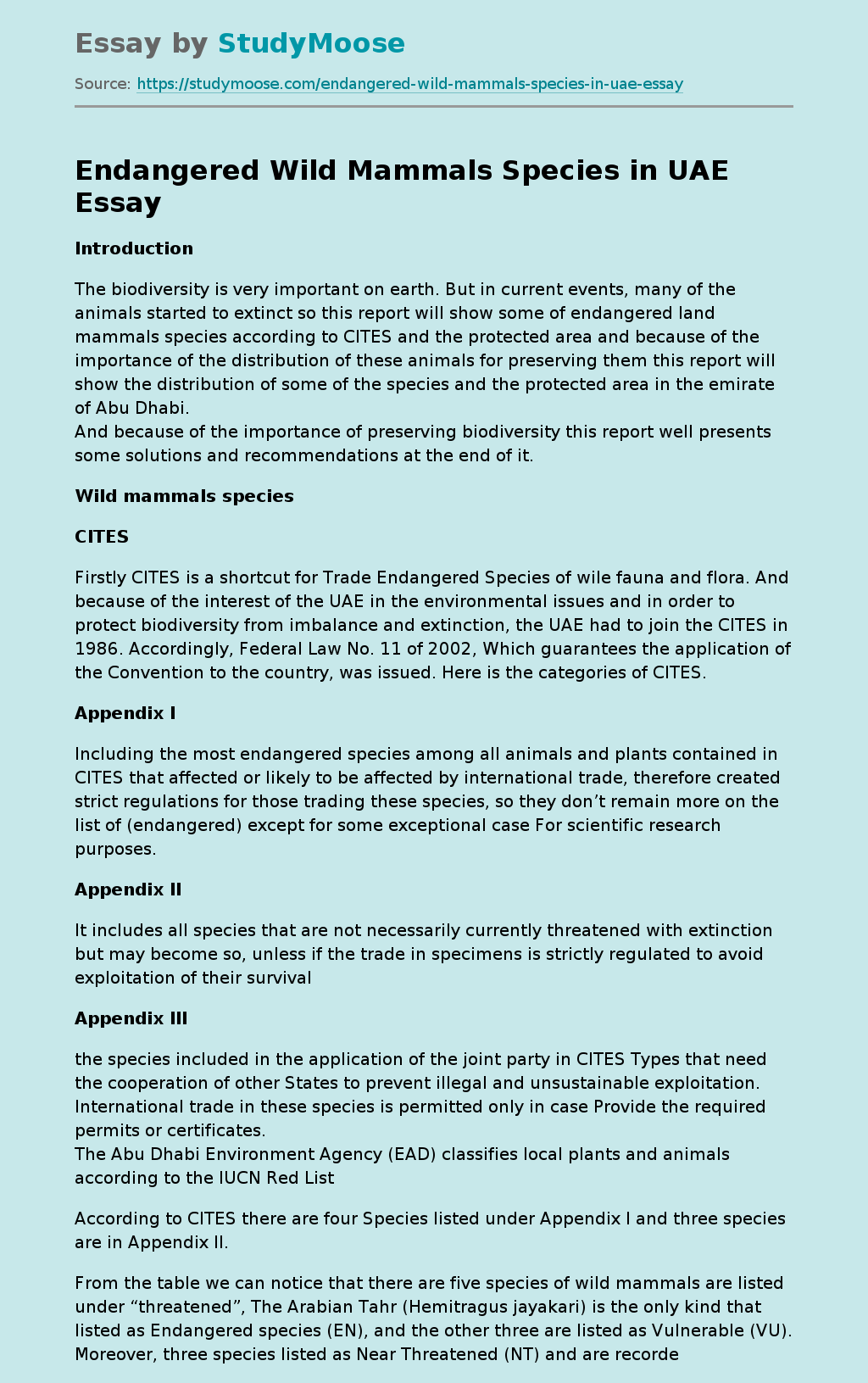