Throughout the study I have tried with the best of my capacity to accommodate as much information and relevant issues as possible and tried to follow the instructions as you have suggested. I tried my best to make this report as much informative as possible. I sincerely believe that it will satisfy your requirements. I however sincerely believe that this report will serve the purpose of my course (Industrial Relation). I am grateful to you for your guidance and kind co-operation at every step of my endeavor on this report.

Don't use plagiarized sources. Get your custom essay on
“ Employment and Trade Unions ”
Get custom paper
NEW! smart matching with writer

My effort will be reworded only if it adds value to the research literature.

Introduction One of the major functions of human resource management is to maintain smooth industrial relations (IR). It is also treated as one of the oldest functions of HRM. It is basically allied with the relations between the employer and the workers in the industry (Singh & Kumar, 2011: 3). According to Weeratunga (2003:5) “Industrial Relations or Labor Relations, the terms used interchangeably, can be viewed as the interaction between the various interested parties involved in employment.

The employer and the employee are obvious parties.

The state, in ensuring a level playing field for both sides, provides the legal framework within which such relations may take place”. In industrial relations, workers are generally represented by their trade unions formed under chapter 13 of Bangladesh Labor Act–2006 whereas employers are represented by their associations such as Bangladesh Employers Federation. HR managers mediate the relationships between workers and employers though they are appointed by the representatives of employers.

Another related term is ‘Employee Relations’.

In the context of developing countries, industrial relations has been influenced by features such as high exploitation of workers, low level of worker participation in decision making, government and political interferences, high rate of illiteracy of workers, low level of employment, low level of awareness among the laborers regarding rights, laws, and trade unionism, and low labor productivity (Khan &Taher, 2008: 222-23). Industrial relations plays an important role in establishing and maintaining industrial democracy (Monappa, 2004: 9) and it is the key to improve productivity in industrial enterprises (Aswathappa, 2004: 534).

Human resource management can play vital roles in enhancing cooperative and friendly industrial relations. In Bangladesh, collective bargaining on pay between employer and workmen is prohibited in the public sector enterprises as the government designs uniform pay and benefits for the employees of all public sector enterprises (Mahmood, 2008). The limited scope of collective bargaining in the public sector of Bangladesh influences the trade unions to develop network with government, political parties and other powerful bodies in organizing their activities.

Mahmood (2008) mentioned that the industrial relations process in the private sector was often disturbed by links between private and public sector unions. Objectives: a) To explore the differences between public and private sector industrial enterprises of Bangladesh with respect to overall status of IR. b) To put forward policy implications of overall improvement in IR of Bangladesh. Industrial Relations Studies in Bangladesh Khan (1986) studied industrial relations in Bangladesh with special emphasis on trade unionism. … Trade Unions Trade Union is an organization of workers who have banded together to achieve common goals such as protecting the integrity of its trade, achieving higher pay, increasing the number of employees an employer hires, and better working conditions.

An organized association of workers in a trade, group of trades, or profession, formed to protect and further their rights and interests. – A group of employees in a particular sector, whose aim is to negotiate with employees over pay, job security, working hours, etc. using the collective power of the members. The most common purpose of these associations or unions is “maintaining or improving the conditions of their employment”. Causes of organizing trade unions Provision of benefits to members: professional training, legal advice and representation for members is still an important benefit of trade union membership. Industrial action: Trade unions may enforce strikes or resistance to lockouts in furtherance of particular goals. Political activity: Trade unions may promote legislation favourable to the interests of their members or workers as a whole.

To this end they may pursue campaigns, undertake lobbying, or financially support individual candidates or parties. Conditions of employment and any grievances — are settled through trade unions. Bargaining rights: Trade unions bargain and ensure the status, rights, wages and demands of workers of the modern world of industry.

Contribution in economical growth: Trade unions are growing rapidly in an economy because of the expansion of business and economical growth. Objectives Trade unions are the only way to manage, compliant, and control the labour force. Lots of objectives are there to organize trade unions. . To defend or improve the wages and working conditions of workers and to bring about a change in the economic order. 2. To strengthen their (labour) bargaining power collectively to establish and achieve all their rights. 3. To dully protect all other interest of the workers . And from the management’s point of view the objectives as written: a) To reduce the number of negotiation. b)

To specify work rules, disagreements and grievances to give the better solution to workers claim. c) To establish the efficient communication between the employers and management to enforce the predictable standards. ) To enhance the overall organizational effectiveness workers can also be sometimes inspired to form and organize trade union. In fact, objectives of a trade union are not defined; rather these are changing according to the need of the economy and overall industry. When these objectives are not settled then the rivals are started History of Trade Unions The Pakistan Period (1947-71) -The East Pakistan Trade Unions Act, 1965 was enacted repealing the Trade Unions Act, 1926. -The Labor Disputes Act, 1965 was enacted. -Industrial Relations Ordinance, 1969 was enacted integrating the above two Acts.

Bangladesh Period (1971-onwards) -Government of Bangladesh declared a labor policy in 1972. The right to strike and collective bargaining in the nationalized industries was prohibited for six months by Presidential order no. 55 in May 1972. -In 1973, the right to strike and lockout, as granted by IRO, 1969 was withdrawn. -In 1974 Act completely suspended the democratic rights of workers by prohibiting trade union activities such as strikes, lock-outs, collective bargaining. -The military regime of 1975 imposed restrictions on the rights of collective bargaining. The Industrial Relations (Amendment) Ordinance, 1977 liberalized the Rights of Freedom of Association -The Labor Policy of 1980 restored the right to freedom of association to a considerable extent -In 1982 the military regime banned trade union activities, strikes, and right of freedom of association. Limitations In Bangladesh Trade Unions have a lot of unavoidable problems: 1. Lack of consciousness: Trade union are not actually completely aware about employees legal rights and duties. 2. Lack of Unity: In Bangladesh trade unions are separated for political influence. 3.

Lack of knowledge: The workers of Bangladesh don’t have enough knowledge about their rights and duties. 4. Political influence: In Bangladesh, trade unions work a part of political parties not as a free right saving association. 5. Division of trade union: Bangladesh is a country where every organization has more trade unions in name only. The overall productivity got down. Suggestions Strengthening bilateral collective bargaining for solving problems quickly and effectively. Multiplicity of trade union creates the rivals in a union. So it must be reduced. Political involvement must be reduced.

There are three types of Disputes : • Disciplinary disputes • Grievance disputes • Industrial disputes • According to Industrial Dispute Act, 1947, Industrial dispute means any dispute or difference between employers and employers, or between employers and workmen, or between workmen and workmen, which is connected with the mployment or non-employment or terms of employment or with the conditions of labour of any person. Causes of Industrial Disputes: Some of the prominent causes of industrial disputes may be listed thus: Employment: The list here includes disputes over wages, allowances, bonus, benefits, working, condition, unjust dismissals, retrenchment of workers, methods of job evaluation, changes in methods of production, non-implement of awards of tribunals, etc.

The National Commission on Labor remarked “though on majority of occasions industrial disputes were based on claims pertaining to the terms and condition of employment, sometimes economic issues of a general character dominated and, on occasion, purely motives”. The causes of industrial disputes can be broadly classified into two categories: economic and non-economic causes. The economic causes will include issues relating to compensation like wages, bonus, allowances, and conditions for work, working hours, leave and holidays without pay, unjust layoffs and retrenchments.

The non economic factors will include victimization of workers, ill treatment by staff members, sympathetic strikes, political factors, indiscipline etc. Wages and allowances: Since the cost of living index is increasing, workers generally bargain for higher wages to meet the rising cost of living index and to increase their standards of living. In 2002, 21. 4% of disputes were caused by demand of higher wages and allowances.

A similar trend was observed in 2004 where indiscipline accounted for 40. 4% of disputes. Bonus: Bonus has always been an important factor in industrial disputes. 6. 7% of the disputes were because of bonus in 2002 and 2003 as compared to 3. 5% and 3. 6% in 2004 and 2005 respectively. Leave and working hours: Leaves and working hours have not been so important causes of industrial disputes. During 2002, 0. 5% of the disputes were because of leave and hours of work while this percentage increased to 1% in 2003. During 2004, only 0. % of the disputes were because of leaves and working hours. ? Miscellaneous: The miscellaneous factors include –   Inter/Intra Union Rivalry –   Charter of Demands –   Work Load –   Standing orders/rules/service conditions/safety measures   –   Non-implementation of agreements and awards etc. Collective Bargaining Collective bargaining includes not only negotiations between the employers and unions but also includes the process of resolving labor-management conflicts. Thus, collective bargaining is, essentially, a recognized way of creating a system of industrial jurisprudence.

It acts as a method of introducing civil rights in the industry, that is, the management should be conducted by rules rather than arbitrary decision making. It establishes rules which define and restrict the traditional authority exercised by the management. Importance to employees ? Collective bar aining develops a sense of self respect and responsibility among the employees. It increases the strength of the workforce, thereby, increasing their bargaining capacity as a group. Collective bargaining increases the morale and productivity of employees.

It restricts management’s freedom for arbitrary action against the employees. Moreover, unilateral actions by the employer are also discouraged. Effective collective bargaining machinery strengthens the trade unions movement. The workers feel motivated as they can approach the management on various matters and bargain for higher benefits. It helps in securing a prompt and fair settlement of grievances. It provides a flexible means for the adjustment of wages and employment conditions to economic and technological changes in the industry, as a result of which the chances for conflicts are reduced.

Importance to society: 1. Collective bargaining leads to industrial peace in the country 2. It results in establishment of a harmonious industrial climate which supports which helps the pace of a nation’s efforts towards economic and social development since the obstacles to such a development can be reduced considerably. 3. The discrimination and exploitation of workers is constantly being checked. 4. It provides a method or the regulation of the conditions of employment of those who are directly concerned about them. 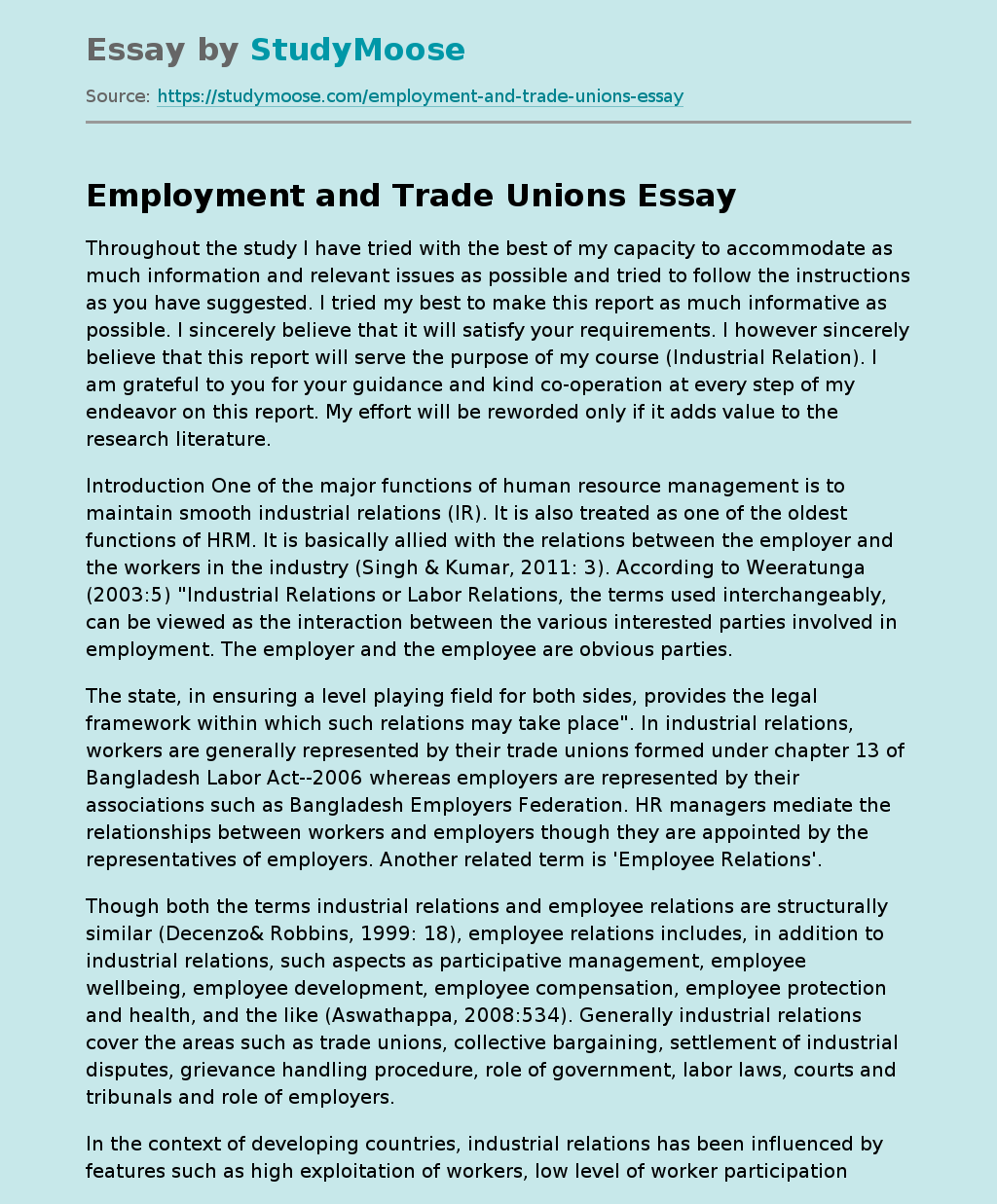