Notably, in the professional world, asking for a recommendation letter may sometimes appear to be a mind boggling activity for some people yet they are very rampant and as one happens to progress in his career they are a necessity is very normal to be asked to write a letter about a particular employee and it is also likewise that you will also ask for letters of a particular employee at some point. As a matter of fact, this is very customary hence when one is requested to write recommendation letter, it should not only be allowed but equally welcomed.

Don't use plagiarized sources. Get your custom essay on
“ Employer Recommendation Letter ”
Get custom paper
NEW! smart matching with writer

Regardless of whether an individual is leaving the organization for good or bad reasons, provision with a good reference letter will be felt like a honor to the people that he has requested to write for him. A good employer should assist his employees to move on as occasionally an employee might do the right duties at work and perform well but still feels like that particular job is not the right one for him.

This brings us to one important aspect of the letter as it is very vital to ask know when, whom and how to ask.

A familiar employer makes it easier for an employee to pop the question and a refusal to do so is always left with him bearing the fact that a strong letter is preferable than a bad letter (Martin 41).

In the law schools, they vest their interest in the information that are obtained from the professors who are well conversant with the students academic performance and also from the employees who can offer opinion about the most important factors. The law schools are more interested with a general summary of an individual as a law student, with more evaluation that would give a clear picture of the students’ knowledge and performance. It is worth noting that this letter is not only relevant to the law school admission committee but also to the student.

The contain of recommendation letter

Duration of the relationship with the applicant should be quoted and in what level. The recommendation letter should contain the following. Personal effectiveness Consider if he applicant would qualify for a person that you would consult as a lawyer . Apart from the professors it is also vital to know whether the applicant has a sense of respect to his fellow students (Martin 67). Communication This is for he purpose to verify whether the applicant is well spoken audible, articulate and eloquent .

Efficiency in writing is also considered and as it has to flow without grammatical errors and well organized. Intellectual capabilities The applicant general knowledge should be verified, His academic record whether it has been affected by any forces like background or social factors. Last but not least, his ability to deal with difficult situations is also analyzed. Self discipline It is important for the industry that an applicant should posses’ qualities like persistence, motivation and efficiency to a greater level.

The applicant should posses the character of devotion and a painstaking effort to accomplish what is taken or assiduity in service. Potential for the study This pertains to in what rank would one place the applicant should he be chosen to study law for instance top quarter? Or average? Is the applicant familiar with the study of law and its process? If there is any relevant information that the person writing the recommendation would like to share with the admissions committee it would be relevant to disclose it.

The following criteria can also be used in writing an employee recommendation letter, effectiveness in performance which is shown by his duty performance and level of production. Specialization gained from the degrees, awards and achievements, University service through participation in community service and committees, Professional ability depending on the department, the inventions and innovations that the applicant relayed, continuing growth in terms of involvement in training programs and membership in professional organization. Other traits such as attitude and cooperation can also be considered and listed.

When writing an employee recommendation letter, there ought to be a form for verification of his previous employment and contacts. It relays his reasons for leaving, duration of employment, and the position held (Martin 241). Conclusively, if one needs to secure a good position be it the work force or school, a recommendation letter is needed because both employers ad the admission bard requires to detect the applicant position to efficiency hence from these letters are relevant in providing relevant information from a former reliable source .

An effective letter of recommendation would not only verify experience but also assures competence, enhances confidence and gains credibility. Its also quick to note that the recommendation letter varies depending on the type of audience it is intended to . For instance the employment letters and the academic letters. All the same, all recommendation letters should at least contain an introductory part, body and the conclusion. 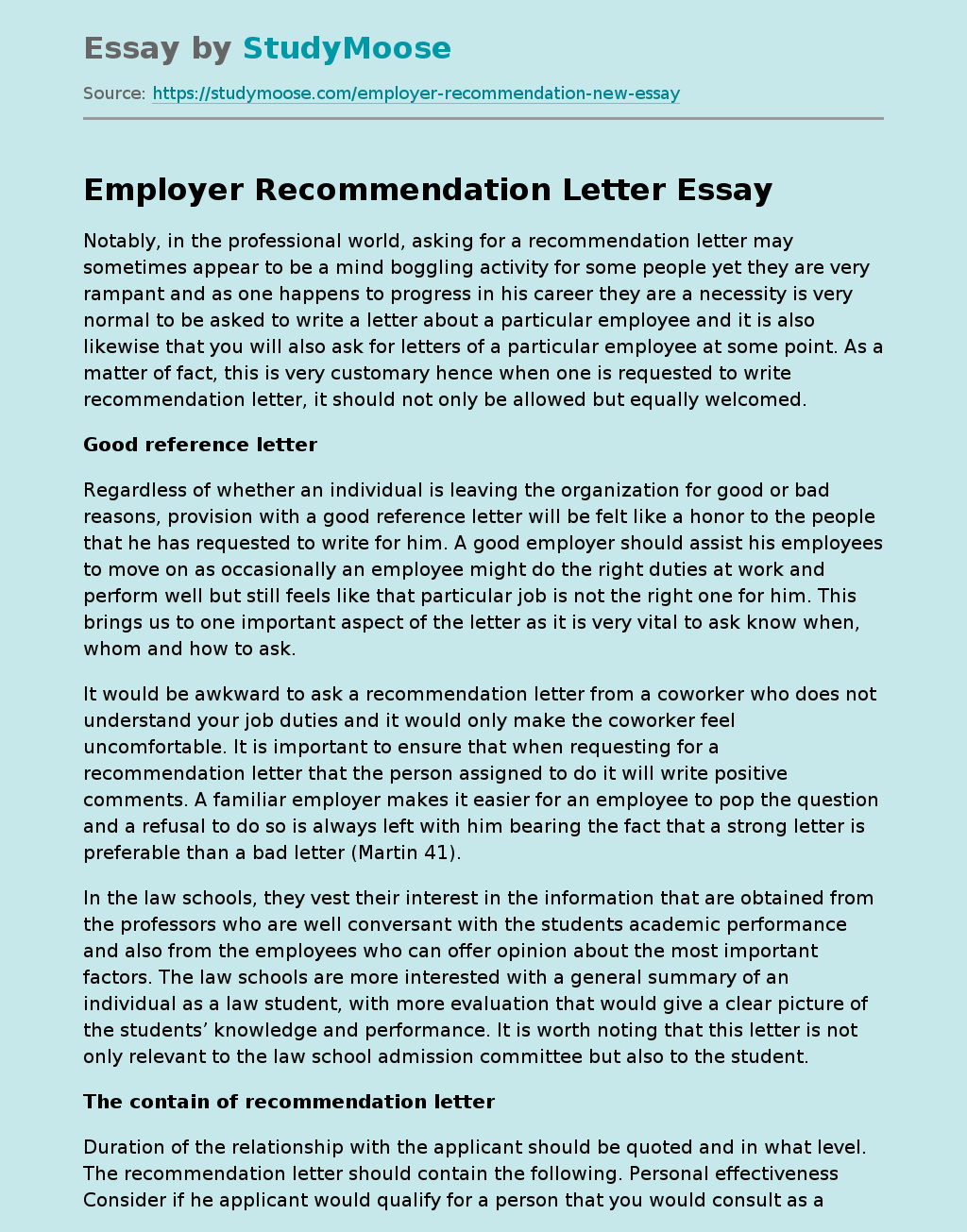