Empirical Evidence of My Grade

When we examine our grades, we are led to believe that they are a reflection of our performance in a class or as people. General opinion holds that grades are equivalent to summarizing the efforts, abilities, and intelligence of a person. However, multiple studies have shown that grades, especially in classes where grades are not empirically based, tend to misrepresent the efforts of students. This misrepresentation is circuitous it convinces students that they are not capable or equal to their peers without taking into account that each individual struggles with different issues and is judged by different standards.

Don't use plagiarized sources. Get your custom essay on
“ Empirical Evidence of My Grade ”
Get custom paper
NEW! smart matching with writer

I am choosing to argue that the grade I should receive is a Pass in a Pass/Fail system–that I argue should be universal so as to better represent genuine efforts to learn. This scale should be a 60% pass, 40% fail, and should look only at the amount of content learned and efforts to participate.

Many may argue that this is self-interest, however, I believe that for the sake of avoiding unnecessary social pressure it is necessary that we adopt a system that places less social pressure on young people, as it results in health issues.

It is a system that according to Dr. Whitman in “Student Stress: Effects and Solutions. Association for the Study of Higher Education” forces students into “situations in which pressure risks the mental health of aspiring students,” for students in situations where they are constantly trying to achieve a standard that is unrealistic, demands a great deal of time, and forces you into situations in which you have to choose grades and satisfying unrealistic expectations over your own physical health.

This “self-neglect” as Pulfrey claims in “Autonomy and Task Performance: Explaining the Impact of Grades on Intrinsic Motivation” is not necessarily a decision of the self, but one in which expectations force you to juggle an unrealistic amount of expectations. I personally think my grade should be better as it is impossible to live by the adage “Grades First” to live by that is to rely on the expectation that physical health, money, family do not determine your life practices, however, they do.

We can look at the empirical evidence of my grade. I have attended every class and of 21 graded participation sections, I have received credit for all. The reasoning behind this is because ultimately graded acts less as a motivator and more as a deterrent. Your grades can often enforce the idea that you are “stupid” as Chamberlin claims in “The Impact of Grades on Student Motivation” when students are motivated by grades, they may receive higher grades, but they learn less. The learning process should be more about the information you gain and your ability to explain it–when compared instead to my ability to pass a test. I may be able to do so. I can study for hours–cram as much as I can, for, after all, I am studying to get a higher grade not to learn the content, and do you know what happens later?

I pass the test and then I forget the information which is not the safest option considering this is a health class. Gorry claims in “The Impact of Grade Ceilings on Student Grades and Course Evaluations: Evidence from a Policy Change” that based on years of studies that grades and opinions are influenced by bias. Specifically, racial and gender bias. In a blind study in which a grader briefly interacted with a student before grading them, but always grading samples intended to be as similar as possible girls scored 28% better than boys that is the difference between many letter grades.

The difference between a C and an A. Hispanic student in comparison to white students scored 36% worse. As a male Hispanic student, I leave an impression. An instructor will judge me that is inevitable. It is virtually impossible that you did not form judgments about me that impact my non-empirical grades. For instance in a very similar study described in “The Impact of Letter Grades on Student Effort, Course Selection, and Major Choice: A Regression-Discontinuity Analysis,” Main writes about how when graders met with their students and were allowed to form brief profile judgments, yet then proceeded to grade math tests in which questions were straightforward all students received fair non-biased grades. Judgments impact grades.

I think that some of my efforts have been overlooked due to bias and a failure to consider special circumstances. I call for revamping the grading system to improve the learning process and limit the binding pressurized system of current grading.

Empirical Evidence of My Grade. (2021, Aug 09). Retrieved from https://studymoose.com/empirical-evidence-of-my-grade-essay 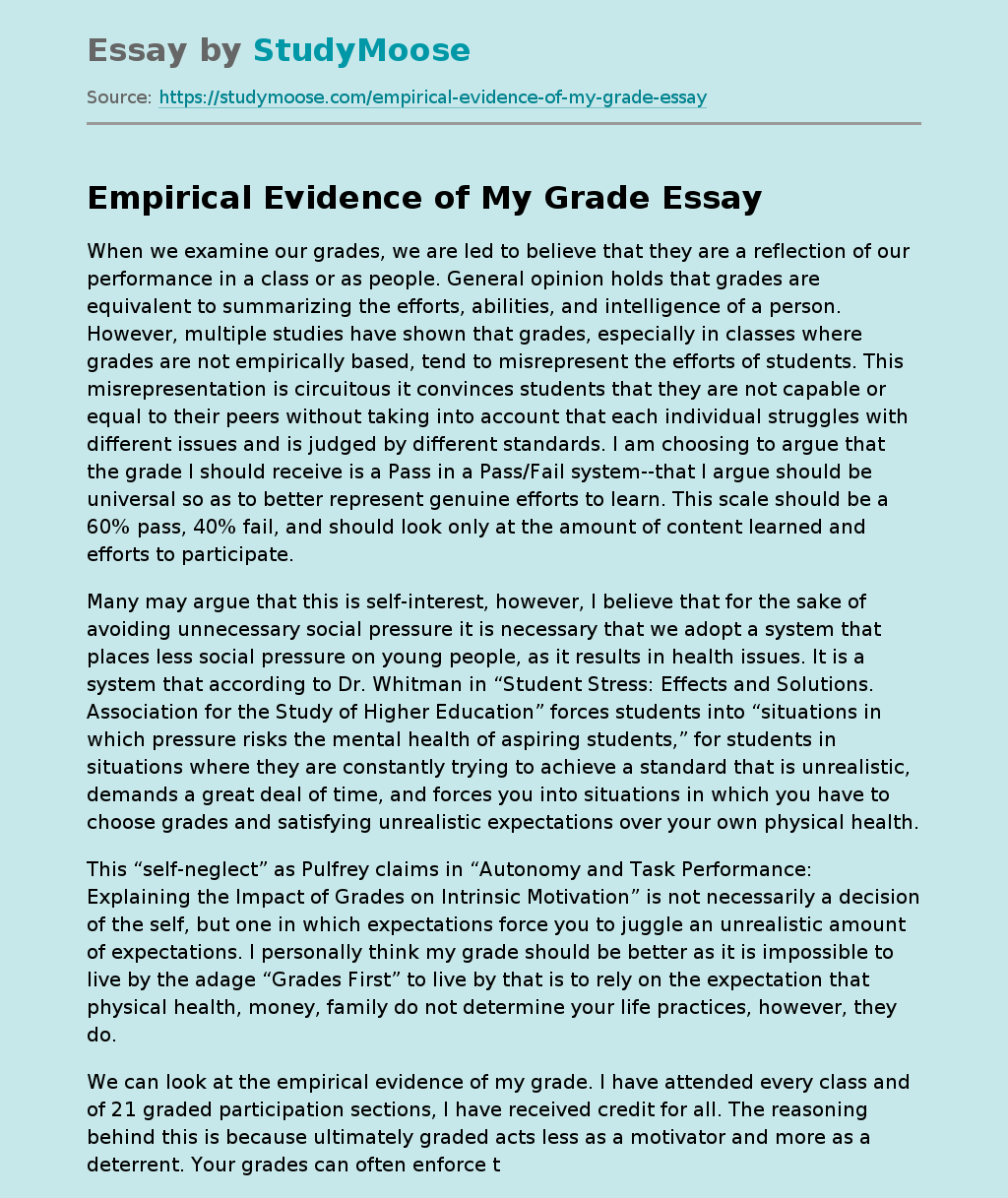