1. According to Bryman (2004), emotional labour is regarded as situation in the workplace where workers are required to shows certain emotion as a part of their job. Bryman (2004, p.103) describes the developing trend of presuming work as a performance, where workplace is seen as stage for performance, while workers are the actors on the stage. He states that workers’ performance that is presented to the customers is vital as it is memorable to customers. Bryman (2004, p.103) emphasizes that emotional labour is capable of creating performative labour.

Don't use plagiarized sources.
Get Your Custom Essay on Emotional labour Just from $13,9/Page

Surface acting is explained as displaying the accurate emotion without feeling it, whereas deep acting involves the true feeling when the emotion is being shown (Hochschild, 1983 cited in Bryman 2004, p.

104). Bryman (2004, p.104) states that there is a continuing change from focus on control to formation of commitment to the organization, so that workers are emotionally attached to the organization. Bryman (2004, p.104) states that the creation of emotional tie will cultivate excitement and meaning for workers. Furthermore, Bryman (2004, p.105) suggests that emotional labour directly affects quality of service delivery, which also affects the quality of goods and services provided. Customers are getting more and more concern on the quality of delivery (Bryman, 2004, p.105). Showing positive emotion like smiling and making eye contact will develop good atmosphere when the service is being delivered (Bryman, 2004, p.105).

Bryman (2004, p.105) also states that with the research on flight attendants, it shows that display of positive emotion like smiling must be deeply felt by the workers but not surface acting. Emotional labour is very important as it distinguishes services which have roughly the same products (Bryman, 2004, p.106). Bryman (2004, p.106) explains that the growing understanding of emotional labour as one of the factors that affect customers satisfaction, which is important to repeat business have been the cause for customer care programmes’ growth. He also insists that Total Quality Management (TQM) have affected customer care programmes, which the main focus is on customer satisfaction. Bryman (2004, p.106) have focused on Disney Theme Parks which emotional labour is very vital in its service delivery. Every employee has been trained to show positive emotion all the time when confronting customers (Bryman, 2004, p.108).

2. Emotional labour has greatly influence the service industries nowadays
(Bryman, 2004). However, arguments exist within the issue of emotional labour over the years (Smith, 1999).  Firstly, it is agreeable that emotional labour is related strongly with service performance (Bryman, 2004, p.105). This is due to positive emotion in service delivery to customers will provide satisfaction to customer which satisfaction implies good quality of service delivery (Bryman, 2004, p.106). Involving emotions when facing customers is vital to keep loyal customer and repeat business as it give much satisfaction to customers (Albrecht & Zemke, 1985 cited in Grandey,2000 ). Ashforth and Humphrey (1993) as cited in Grandey (2000) states that handling emotion may cause positive delivery of service as it reflects good image of organization and makes customers feel good. Positive expressions of emotion like smiling and giving compliments are some example of involving emotion to boost service performance (Adelmann, 1998 cited in Grandey, 2000). Studies from Pugh (1998) as cited in Grandey (2000) showed that there is a direct relationship between emotion shown by bank teller and customer contentment.

Besides, it is undeniable that women are more demanded than men in jobs related to emotional labour (Bryman, 2004, p.111). He states that it may because of women are more suitable to display emotion in some particular jobs (Bryman, 2004, p.112). According to Fay (2011), gender differences are significant in occupations with high level of emotional labour. Finding by Simpson and Stroh (2004) as cited in Fay (2011) showed that women are more probably conceal their negative feeling, whereas men are likely to hide their positive feeling. In addition, research by Mann (2007) as cited in Fay (2011) revealed that men express true emotion on what they actually feel, while women tend to show warmth and not affected by their true feeling.

Women have higher level of emotional expressivity (Rafaeli and Sutton, 1989 cited in Grandey, 2000). Therefore, they can accomplish service jobs better which require emotional labour (Grandey, 2000). Apart from that, Bryman (2004) stresses that women are more suitable than men in some occupations where sexuality is a key element. Example of those work that suit women is nursing, nurses are required to express strong emotion such as care, affection and kindness (Henderson, 2001). The nursing work suit women since they have high level of emotional expressivity. From all 2,500,000 nurses, only 6% are men and this showed that nursing is an occupation dominated by female (NursingSchool.org, n.d.).

Hochschild (1983 cited in Bryman 2004, p.121) argues that worker engaged in emotional labour will have negative effect inflicted to them. However, it is not always the case that emotional labourers are adversely affected. Studies have shown that emotional labourers like flight attendants, beauty therapists and insurance agents do not feel the negative impacts of emotional labour when being involved (Wouters, 1989; Leidner, 1993; Sharma and Black, 2001 cited in Bryman, p.121). Research by Ashford and Humphrey (1993) as cited in Grandey (2000) showed that workers involved in emotional expression to satisfy have more jobs satisfaction as they make their jobs less dull. A study on table servers reported that employees who really put feeling in the jobs are more satisfied than employees who do not (Adelmann, 1995 cited in Grandey, 2000). Hence, those studies have shown that workers involved in emotional labour are not harmfully affected, but they gain job satisfaction from it.

Finally, cast members in Disneyland must show emotional labour when facing every customer (Bryman, 2004, p.109). This aspect of emotional labour in Disneyland is not the best emotional approach to bring the best out of the cast members. This is because workers feel horrible when their emotion is totally controlled by the organization (Hohschild, 1983 cited in Bryman, 2004). Lack of control and autonomy over their own emotion can lead to life stress and work stress (Rodin, 1986 cited in Grandey, 2000).

Research from Wharton (1993) as cited in Grandey (2000) discovered that employee with high emotional autonomy have relatively low emotion fatigue than employee with low autonomy. Eventually, low autonomy and high emotional regulation in workplace can cause withdrawal behaviour (Grandey, 2000). Grandey (2000) suggests that emotionally exhausted workers might leave the organization in the long run due to burnout. A court case involving customer service workers sued the company because they were required to smile even though they were sexually harassed by customers (Grandey, 2000). Thus, Disneyland which takes away workers’ emotional independence might cause negative result.

In conclusion, many arguments still persist in the aspects of emotional labours. Therefore, more researches and studies needed to be carried out so that emotional labour can bring the best out of workers and ultimately the organization.

3. Emotional labour have increasingly significant to business nowadays. Everyone has the experience related emotional labour whether on the giving or receiving end. I have encountered many occasions associated to emotional labour in which I’m on the receiving end. After reading text by Bryman (2004), I felt that emotional labour is extremely important in today’s workplace to satisfy customers after reflecting on my own experience. The most memorable encounter I had experience was at electronic shops. I was surveying between the shops to purchase an electronic device I wanted. As I was surveying between electronics shop, I realised that the attitude of salespersons towards customer are different from one another.

When I was at one of the shops, the salesperson welcomes me with a bright smile and offers me help whenever I need it. He was explaining patiently the feature of the device to me with a pleasurable tone and his smile never went away even it took a long time to explain to me. On the other hand, when I was at another electronic shop, the situation was totally different from the first shop. The salesperson did greet me when I entered the shop but his face was gloomy and most importantly without a smile. From his tone when speaking to me, I felt that he was not willing to serve and explain his product to me.

He did not proactively explain his product and only answered my inquiry with a low tone. Finally, I bought the device from the first electronic shop. In my case, salesperson as the frontline service employee is very critical as they are the key to generate sales to consumers (Smith, n.d.). So, they are the workers who should involve emotional labour to perform their task effectively (Ashforth and Humphrey, 1993 cited in Grandey, 2000). In my case, the first salesperson expressed positive emotion which satisfy me as a customer but the second salesperson did not. Eventually, the first salesperson succeeded selling his product to me.

In conclusion, after reading the text by Bryman (2004), I realised that the importance of emotional labour especially in service industries. I understand the significant even more deeply when it relates to my own experience as myself had influenced by emotional labour. 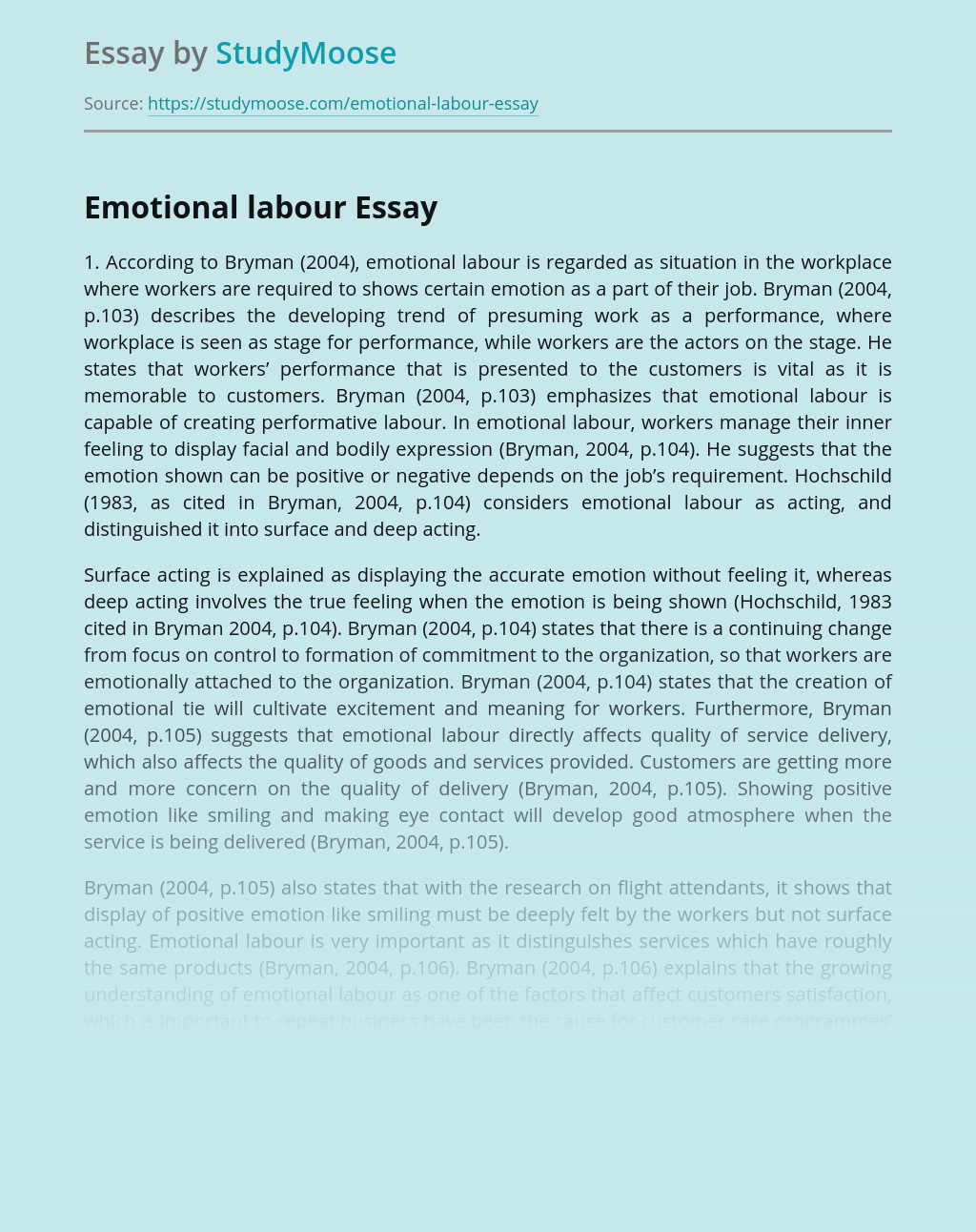 In the beginning look the typical individual might think that the words jealous and envious can be used interchangeably, since they are synonyms, however if you stop and evaluate these two words you will discover that they are not all that interchangeable. When it comes to deciding what words are kept in a language and... VIEW ESSAY

This essay intends to examine the poem “The Send Off” by Wilfred Owen. Owen wrote this poem while he was stationed at Ripon army camp. He was based there after being a patient at the Craiglockhart War Hospital, this is where he met Robert Graves and Siegfried Sassoon. Owen was at Ripon between March and... VIEW ESSAY

View sample
Get Essay
Definition paper on the word "Strength"

Strength is more then just a physical word. It is a word of high stature. Strength can be used in three ways; physical, mental, and spiritual. Strength is the quality of being physically strong, capacity to sustain the application of force without yielding or breaking, effectiveness, and concentration. Strength is a word that is a... VIEW ESSAY

View sample
To be loved or feared as a leader

Leaders in fields ranging from military and politics to business and even education have been posed with the choice of instilling love or fear among their respective followers. Traits like warmth and trustworthiness of a leader instill love among followers and fear of a leader originates mostly from his strength and competence. Although there are... VIEW ESSAY

In the play Hamlet, Shakespeare creates a rich emotional fabric in Hamlet’s first soliloquy. From the first lines of the soliloquy, we can find such emotions as depression, disillusion, anger, and even the hatred and disgust for Hamlet’s mother and uncle. The first line in the soliloquy shows us depression: “O! that this too too... VIEW ESSAY