This paper explores the concept of emotional intelligence and the effects on leadership. The articles discussed in the paper analyzed the different array of qualities in emotional intelligence towards leadership. Emotional intelligence is a way of behaving and acting towards situations and people. Leadership styles must adapt to the situations and exhibit empathy at times to support the perception of caring. Through empathy leadership will exhibit thoughtfulness and caring in the eyes of the employee. Empathy is an emotion that human’s exhibit and how they exhibit the emotion in group’s settings can and will affect a leader’s perception.

Turn in your highest-quality paper
Get a qualified writer to help you with
“ Emotional Intelligence in Leadership ”
Get high-quality paper
NEW! AI matching with writers

Men and women make up leadership in all facets of industry, but which one is better? Does it matter when all the variables are equal?

Which sex is better at emotional intelligence and will that make either more effective in leadership?

What is Emotional Intelligence?

These five competencies are analyzed to rate successful leaders further in the paper. Goleman helped develop the application of this theory to leadership styles and principles (Warwick & Nettelbeck, 2004).

Competence of Emotional Intelligence in Leadership

There are two types of competence models identified in performing exceptionally as an effective leader. The two competencies must be understood to gain a more precise understanding of the contribution of emotional competence has in the leadership role (Walter, Humphrey & Cole, 2012).

Threshold Competencies. The first competency is the threshold competencies; this model addresses those that people need to perform the job. These are the minimal skills needed to carry out the tasks associated with given position. Most organizational competence models fit into this category (Walter, Humphrey & Cole, 2012) Distinguishing competencies. The next competency focuses on the exceptional leader. Distinguishing competencies are those that allow the effective leader to stand out from the poor leaders (Goleman, 2012). This is usually the traits of an outstanding leader who uses vision as an example to bring a company out of a slump (Walter, Humphrey & Cole, 2012). The distinguishing competencies are qualities needed to perform superbly (Walter, Humphrey & Cole, 2012). Case Study: Effective Leadership. According to Goleman, a study of emotional competence in leadership was performed at Hay/McBer in Boston by Lyle Spencer Jr. with Wei Chen (Goleman, 2012).

The analysis of more than three hundred executive level leaders from 15 global companies showed that six emotional competencies were distinguished from the average (Goleman, 2012). The competencies consist of influence, team leadership, organizational awareness, self confidence, the drive to achieve and leadership (Goleman, 2012). Why are these qualities important in leadership? From a leadership standpoint Emotional Intelligence will support or determine a leader’s success (Dainton and Zelley, 2011). The Study. Warwick & Nettelbeck discussed a study completed by David McClelland of exemplarity leaders and the competencies they possessed (2004). The strengths in a wide spectrum of emotional intelligence ranged from self-awareness and motivation to social awareness and social skill. The only emotional intelligence capability not represented was self regulation, but adaptability, from this cluster, was 57% more common in the effective leaders (Warwick & Nettelbeck, 2004).

The next portion covers the effectives of empathy in leadership. Goleman addresses empathy as one of his five points of emotional intelligence. Over the years many papers have been written about women and their ability to be natural nurtures (Anonymous, 2008). Perhaps in a person’s personal life women are more empathetic then men. Significant research performed on the concept of women possessing a natural ability to be empathetic. When empathy is observed in the workplace or by a leader who has the upper hand men or women? Sex Differences. According to Goleman, men and women are compared in many ways (2012). He also goes on to describe the similar traits men and women poses and those traits cause behavioral characteristics. The results from test data gives a bell curve pattern when graphed and allows psychologist to review the similarities and differences between the sexes (Goleman, 2012). The idea behind specific sex abilities to be better at leadership based on their individual design would be acceptable.

The idea that a specific sex is better just because they were born with female or male ingenuity is difficult to prove (Norwack, 2012). Data around empathy. Many studies are conducted and have been conducted by psychologist around the world with mixed feelings around which sex is better at a specific subtopic (Greenberg, 2005). Leadership uses many concepts and one concept in particular is empathy. Women in western culture tend to develop this naturally due to the way western culture influences women (Greenberg, 2005). Greenberg, goes on to describe the western woman as one of empathy and describes tests and experiences women have over men (2005). Profile of nonverbal sensitivity. At Harvard two professors tackled a challenge to solve the age old question are women more empathetic than men (Goleman, 2012) Professor Rosenthal and Judith Hall performed a verity of psychological test to measure the level of feelings.

The ability to sense and understand people’s thoughts through their feelings is defined by Goleman as empathetic accuracy (2012). Goleman experimental methods assess empathic accuracy and illustrate emotional response by asking people to depict an emotion of someone they see (Goleman, 2012). Goleman conducted a range of test involving test subjects. The test subjects watched conversation and evaluated people and attempted to figure out their feelings (Goleman, 2012). Psychologist than compared the result against the emotional person’s own narrative. Goleman went on to describe women did not perform better than men in a series experiments (2012).

There was no evidence of a female intuition advantage and Goleman goes on to associate that women have a distinct willingness to be empathetic. Greenberg describes women as wanting to be empathetic and men not so much (2005). Which sex is better with Emotional Intelligence? Based on the data above the so called sex difference toward empathy would argue that men are latent in their ability for empathy, but less motivated to be empathic (Greenberg, 2005). So much that men tend to see themselves in terms of a tough guy. Men have less motivation to seem sensitive in most cultures because that seen as a sign of weakness (Goleman, 2012).

Why is Emotional Intelligence Important?

2.There are individual differences in the capacity to perceive, understand, use, and manage emotions (Norwack, 2012). 3.Differences in Emotional Intelligence are important in some contexts and less important in others (Norwack, 2012). Norwack described Emotional Intelligence best as “the ability to perceive and express emotions, understand and reason with emotion, and regulate emotion in self and others” (Norwack, 2012). As an effective leader knowing about employees will be the key to success towards employees respecting his or her leader. 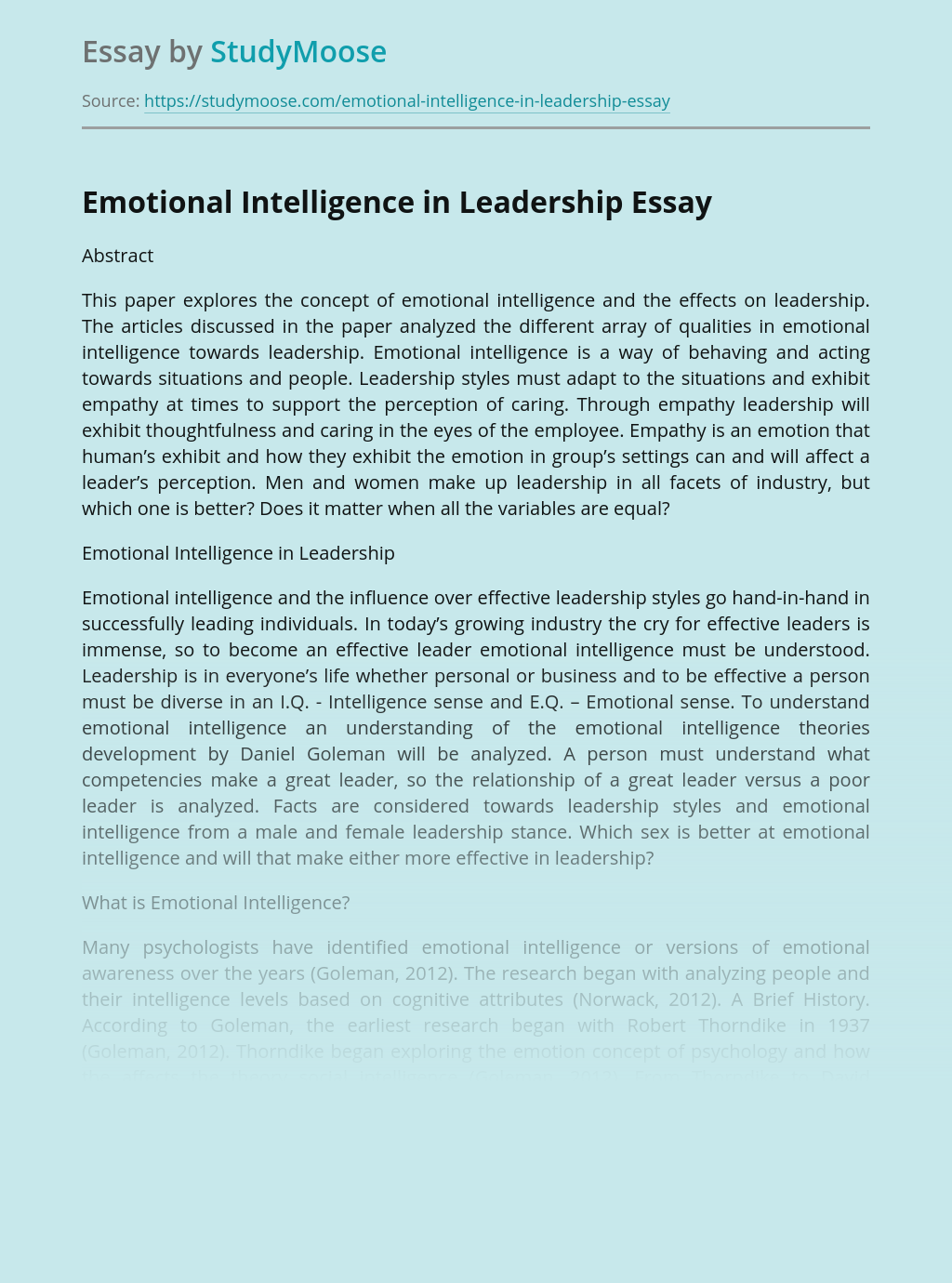 Turn in your highest-quality paper
Get a qualified writer to help you with
“ Emotional Intelligence in Leadership ”
Get high-quality paper
Helping students since 2015
Stay Safe, Stay Original