Eminem was married in his 20’s this was predictable because he had a stable girlfriend and was engaged therefore this led to marriage. The marriage stage in Eminem’s life was the good moments; it was like his life was on track finally. Eminem and Kim had a child together called Hailey. She was a bridesmaid at their wedding. This had a big effect on Eminem’s life because Hailey is his number one person. He loves her to pieces, he talks a lot about her in his music, and he expresses his upbringing to the world.

Don't use plagiarized sources. Get your custom essay on
“ Eminem’s Life ”
Get custom paper
NEW! smart matching with writer

This shows how the marriage and having a child affected him physically because now his expressing the good vibes in his music, it’s something that he is happy about. This affected him intellectually because his daughter is constantly on his mind hence why he made a song about her. His song ‘’Hailies Song’’ expresses a lot of his life and how much she has an effect on him, he seems to think that he is wasting his time throughout his life and he feels like the world is on his shoulders.

His daughter gives him that little wakeup call that tells him that his life isn’t all that bad because he loves seeing her grow up. This shows how important Kim and Hailie are to him. Unfortunately he gets divorced with Kim and obviously this wasn’t predictable but it hurts him to think about the divorce and he actually feels like he wants to give up.

This has an effect on his development because this could affect his future, when he meets someone new he is going to have doubts and be overprotective with his daughter and weary about who is getting himself involved with.

He tried to make it work with Kim but it wasn’t as easy as he thought. Moving Homes – Eminem was moving homes nearly every 3 months due to his home life being un stable with his mum, they never had a lot of money therefore he was forced to leave school in year 9. He had to start providing for his daughter and also his mum, he had to get a job and make his music his dream. He did it, he talks about it all in his songs; this shows the effect on his development because although he had no help from anyone else he made it, he had the confidence to get out there and make his dream.

This must have been extremely hard for him because his mum was an alcoholic, they lived in a trailer. He used to get bullied in school due to not having the things that everyone had due to the lack of income. He had to build his bridge and get over the bad things and try moving himself onto the good things. It’s like he was forced to give up his education because of how important it was for him to start proving himself.

This affected him physically because everyone can see the way he is growing up in this bad way; this could have affected his confidence leading him to feel embarrassed, this situation affected him intellectually because his mind was partly damaged because he wasn’t sure how to get out of the situation he was in this lead to confusion. Confusion affects a person emotionally because they are aggravated about what to do, people become restless.

Eminem’s social life would have been affected by this because he was being judged and looked down on because no one liked him, he found it hard to get close to people and trust people this would have affected his relationship with people his own age. He never had the things that everyone else had, he never had a nice car and nice clothes unlike the others therefore he couldn’t compare to them. This is a predictable life stage because Eminem and his Mum never had much money; his mum was unable to pay rent therefore the time that she could stay at a house or trailer was limited.

She was a drug taker therefore she could have had drug dealers after her for money. By putting Eminem’s upbringing into perspective moving house is predictable because it is band to happen. It’s impossible for a single parent who is on drugs and an alcoholic to not only bring up a child but to manage their low income, afford food and also pay for drugs within such a limited income span. Drugs and alcohol was clearly more important to his mum hence why she couldn’t pay her rent. Where this ituation was on going once Eminem had moved houses a few times he probably got used to the routine of moving house and because isolated or separated from old friends. It was a situation that he had no way of adapting to because he was never settled. Eminem getting scouted – Eminem got himself into a show at the Olympics, this is where he got scouted by Dre, Dre got him signed and helped him to make the success of his life. This had an impact on him because he is finally living his dream; the good has finally come out of all the bad things and the struggle that he has been through.

He can now afford to provide for him, his mum and his daughter. He must have had enough of providing for his mum and he left home, it hurt him to leave home so much that he thought he would express it to the world. He expresses his life in his music, that’s why everyone loves him because his truthful. His music is deep; when Eminem moved out he made a song called ‘Cleaning out my closet’ He explains to his mum that he didn’t mean to hurt her, he couldn’t deal with all the commotion and emotion.

He explains that people can trigger him but they’ll never figure him out. The reason for this is because his been through so much that no one will never understand the full reasons, they can have their opinion but they don’t know the truth. This has an effect on his life because people used to doubt him and thing that he was stupid do to him living in a trailer. They were fake people, they never understood him. He didn’t want to hurt his mum but he needed to leave.

This had an effect on his development because he had to get his own house, bring up his daughter and escape from the misery that he was stuck in with his mum. This also gives him freedom to be able to cope without all of the stress loaded on top of him. To conclude all this up, Eminem started off leaving school and moving every 3 months due to his life being unstable because of his mum was on a low income. This lead for him to leave school and get a job to provide for him and his mum, he left school and got scouted at the Olympics by Dre, this is how he got his job.

He got his life on track; he had a child and then moved out away from the stress. He had confidence in his self when no one else did. He is where he wanted to be, he was determined to win it and he did. This affected him physically because he can now afford to provide for himself and his daughter, he’s dress sense is more fashionable because he can afford to pay for these nice things. It would have affected him intellectually because his thoughts have changed; the tables in his life have turned because he is living his dream.

Therefore the way he thinks will become more positive due to things falling into place and becoming more real. It would have affected him emotionally but in a good way, he is proud to know that he put in the effort himself, he was determined to win it and he was successful. You need to go through some bad to get the good; He didn’t have to be insecure about anything because he achieved what he wanted. When it comes too socially, his dream would affect him in a positive way because he had fans; thousands of people want to meet him.

His fans are crazy for him, this built him a relationship with others because although the years that he has wasted and the tears that he has tasted nothing can take it from him. People have begun to love him for whom he is. This life situation was unpredictable because no one ever expected for Eminem to turn out the way he has, he went through such a bad stage as a child that he lost hope in everything. Until he tried something new; he started to go to shows and this is where he was found. He never knew that he would get scouted and became famous it was all a dream to him that came true. 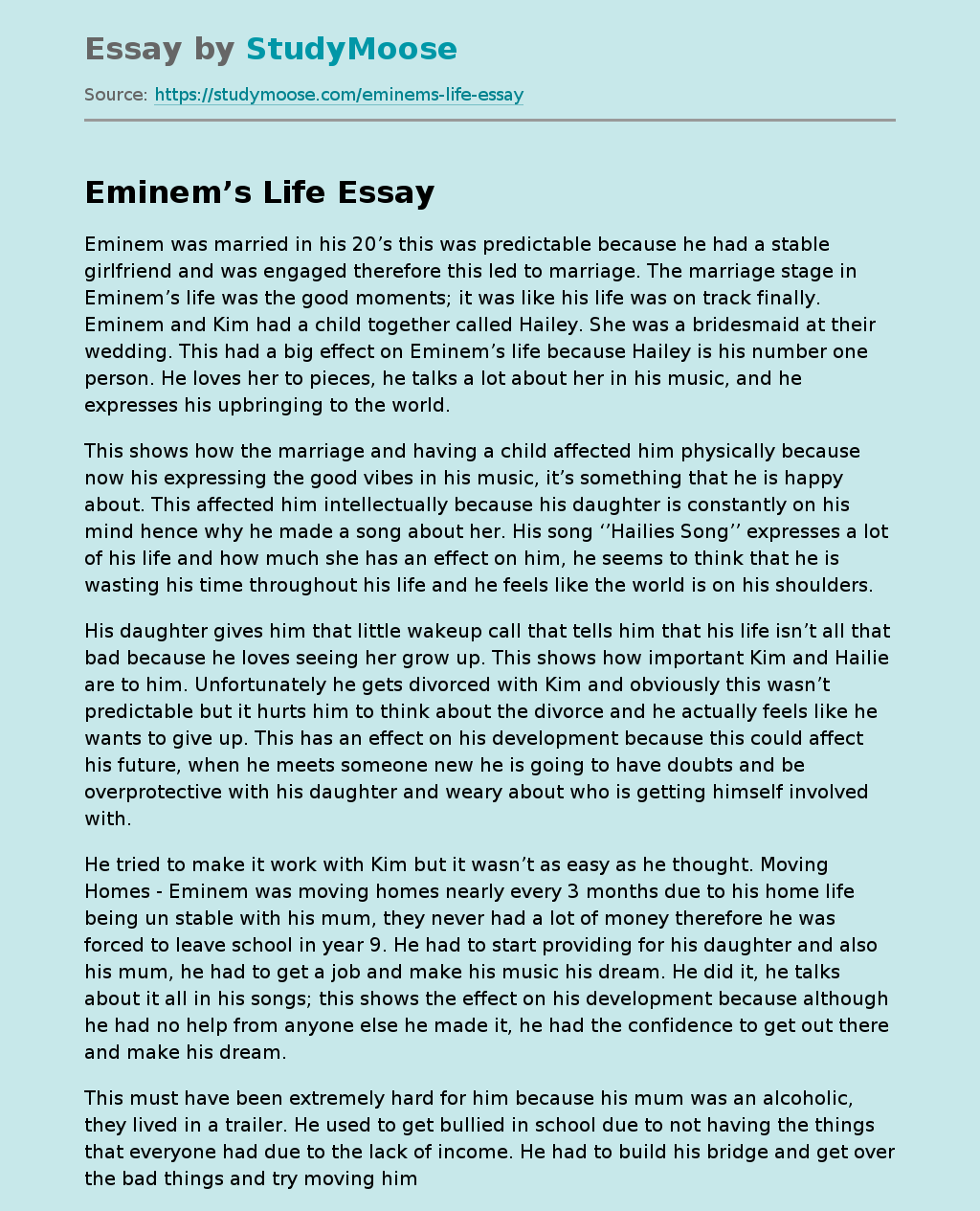