It is human nature to place confidence into science because it is heavily researched and perceived as the truth. However, Emily Martin shows that the female role in the reproductive process is not thoroughly depicted. Martin said, “part of my goal in writing this article is to shine a bright light on the gender stereotypes hidden within the scientific language of biology. ” This article demonstrates how the female role in the reproductive cycle is just as insistent, if not more, as the male’s role.

Don't use plagiarized sources. Get your custom essay on
“ Emily Martin: The Reproductive Cycle ”
Get custom paper
NEW! smart matching with writer

Emily Martin proposes that science defines women as having a non-active and less significant role in the reproductive process.

The role in which women play in the cycle of life is depicted through science as far more passive function than that of the male. The egg is seen as passive. It does not move and is transported along the fallopian tube. In contrast, sperm are seen as active. They deliver their genes to the egg and development starts.

Martin quotes Gerald Schatten and Helen Schatten in that the egg acts as a Sleeping Beauty, “a dormant bride awaiting her mate’s magic kiss, which instills spirit that brings her to life”, while the sperm is on a “mission” to “move through the female genital tract in quest of the ovum.

However, through recent research, scientist concluded that the egg performs several functions and is quite active itself in the reproductive process. Before this research it was thought that sperm were powerful penetrators capable of thrusting itself through the inner vestments of the egg.

After much research, scientists in biophysics labs at Johns Hopkins University determined that the propelling force of the sperm is very weak, and that only through the adhesive molecules on the egg and sperm do the two stick.

The zona acts as a “sperm catcher” and has to “capture and tether” the sperm before it can penetrate. But the most active and interesting roll the egg plays is that it “serves as a sophisticated biological security system that screens incoming sperm, selects only those compatible with fertilization and development, prepares sperm for fusion with the egg and later protects the resulting embryo from polyspermy. ” Here the egg plays three vital roles in the developmental process of the embryo. It chooses which sperm is well-suited, sets up the fertilization process, and protects the sperm through the whole process.

The author was effective in providing textual examples of the scientific language that wrongly represents the female role in the reproductive cycle. She quotes medical textbooks as referring to the menstrual cycle as “”debris” of the uterine lining, the result of necrosis, or death of tissue. ” Martin goes on to counter this quote with an example of the positive language used to describe the sperm in saying, “Whereas the female sheds only a single gamete each month, the seminiferous tubules produce hundreds of millions of sperm each day.

Both quotes provide strong examples of the scientific language used. Quoting such language not only provides the audience with examples to better prove her point, but that because this information is coming from a medical textbook provides the reader with confidence in the cited source. One way in which this scientific discrepancy can be improved is by teaching it at a young age. This could be done by implementing a new curriculum in sexual educational classes in public schools.

It is important that the new curriculum use different language and metaphors to deter from the stereotypical view of the reproduction process. This may at least curb the sexual bias of this subject to future generations. This article reveals how scientific language can create misconceptions about the truth about the sperm and the egg. Martin cautions us about metaphors in science. While many of us believe science to be undoubtedly true, bias can be lurking. 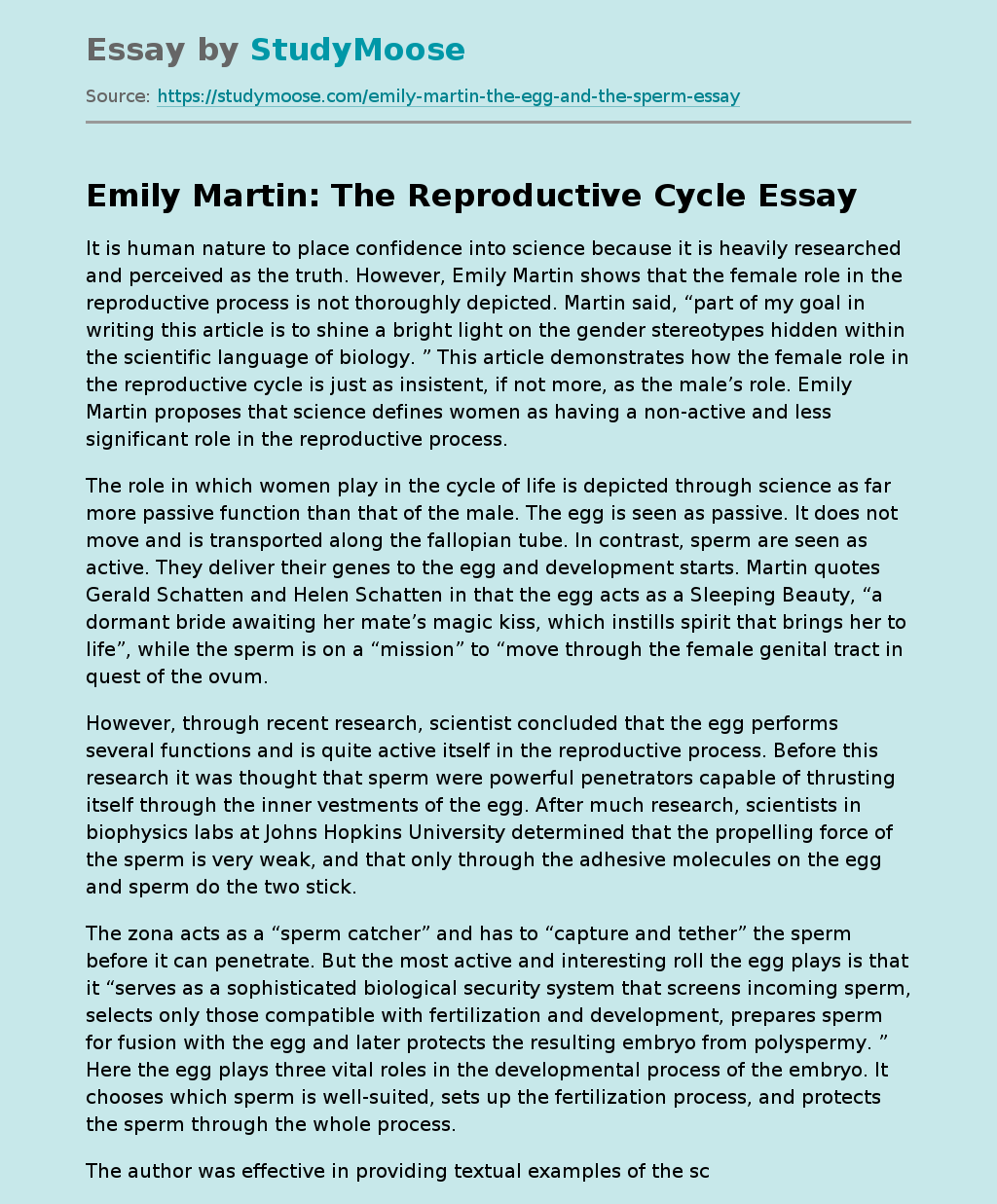