A discussion of Emily Dickinson’s view of God in the poem “I Shall Know Why-When Time Is Over”.

Emily Dickinson had a view of God and His power that was very strange for a person of her time. Dickinson questioned God, His power, and the people in the society around her. She did not believe in going to church because she felt as though she couldn’t find any answers there. She asked God questions through writing poems, and believed that she had to wait until she died to find out the answers.

Don't use plagiarized sources. Get your custom essay on
“ Emily Dickinson’s Reflection of God ”
Get custom paper
NEW! smart matching with writer

Dickinson was ahead of her time with beliefs like this. Many people in her generation just believed in God, went to church, and looked highly on the events discussed during church out of fear. These people were hesitant to ask questions, afraid of God, and scared of Dickinson because she started to inquire about things that only God was capable of answering.

In Dickinson’s poem, “I Shall Know Why-When Time Is Over”, she is describing her feelings toward God.

It appears as though she is angry with Him because she cannot get any answers to her questions. Emily Dickinson feels, that the answers to these questions will only come with death. ” I shall know why-when time is over- And I have ceased to wonder why- Christ will explain each separate anguish In the fair schoolroom of the sky- (78)”. After she dies and God answers all of her questions, Dickinson then says: ” I shall forget the drop of anguish That scalds me now-that scalds me now!” This shows Dickinson’s anger toward God.

She does not want to have to die to have her questions answered. She wants to be able to live without these questions of what God wants, because they are deeply affecting her. As time goes by, one could say that Dickinson is learning to live with the questions she has for God. She does not look at death as a bad thing, she starts to look at it in a positive way. She slowly starts to seclude herself from others, which is apparent in her poems. Dickinson starts to discuss her state of solitude and how it came about. This is described in, “The Soul Selects Her Own Society”. Dickinson says that: ” The souls selects her own society- then shuts the door- To her divine majority- Present no more-(80).” At this point in her life, Dickinson no longer wants to be a serious part of any society. Also read luma reflection paper

By secluding herself from people and writing poetry and letters only to those close to her, she could question anything without being noted as a skeptic by people within the society. Due to her beliefs, many thought that Dickinson contributed to blasphemy, simply because she questioned God and authority. However, in all actuality, Emily Dickinson was a loving and loyal woman with a lot of unanswered questions. It was as though God has complete power over Dickinson, and this was her way to praise God-by total seclusion. Instead of going to church, she stays at home and worshiped God, whenever she wanted.. In “Much Madness”, Dickinson describes societies attitudes toward her: ” Much madness is divinest sense- To a discerning eye- Much sense-the starkest madness- `Tis the majority-(84)”. In Dickinson’s so called “Madness” there is a Godlike presence that only she recognizes. While everybody else thinks she is insane, she knows that she is not, and God knows this as well. ” In this, as all, prevail- Assent-and you are sane- Demor-you’re straightaway dangerous- And handled with a chain-(85)”. She is describing what kind of people there are in society: those who conform to what they are supposed to do and believe, yet in all essence, they really do not understand what they are doing or believing, and those people who rebel from what is normal and explore their surroundings, asking things that others dare to ask. If they rebel, people will think their insane, and that will put a label on them, causing people to become frightened when near them.

As society makes Dickinson feel out of place she starts to realize the importance of God and who He really is. This is important because God and death are now becoming a more critical part of her life. Dickinson starts to dwell on death and when it will come to her. She describes how she thinks death will come to her and how God will greet her in the poem, “Because I Could Not Stop for Death”. She imagines death coming in a carriage and taking her off to a happy place of “immortality”. ” Because I could not stop for death- He kindly stopped for me- The carriage held but just ourselves- And Immortality.” This shows that Dickinson has realized the importance of God in her life, whereas in previous poems she did not.

Dickinson then goes on to describe the passing of the carriage over fields and the sun, on her way to an everlasting happiness in heaven.

In conclusion, Emily Dickinson had a view of God that revolved around questioning His power. However, as she grew she started to realize how much power God actually has over a person and their life. Dickinson lived to serve and please God. She did this by simply believing in Him and in what He could do. She did not need to go to church, become a nun, or profess her faith externally to be a true believer. Emily Dickinson showed her love and faith in God through her strenuous thought and questioning, and with her belief that God is always there when you 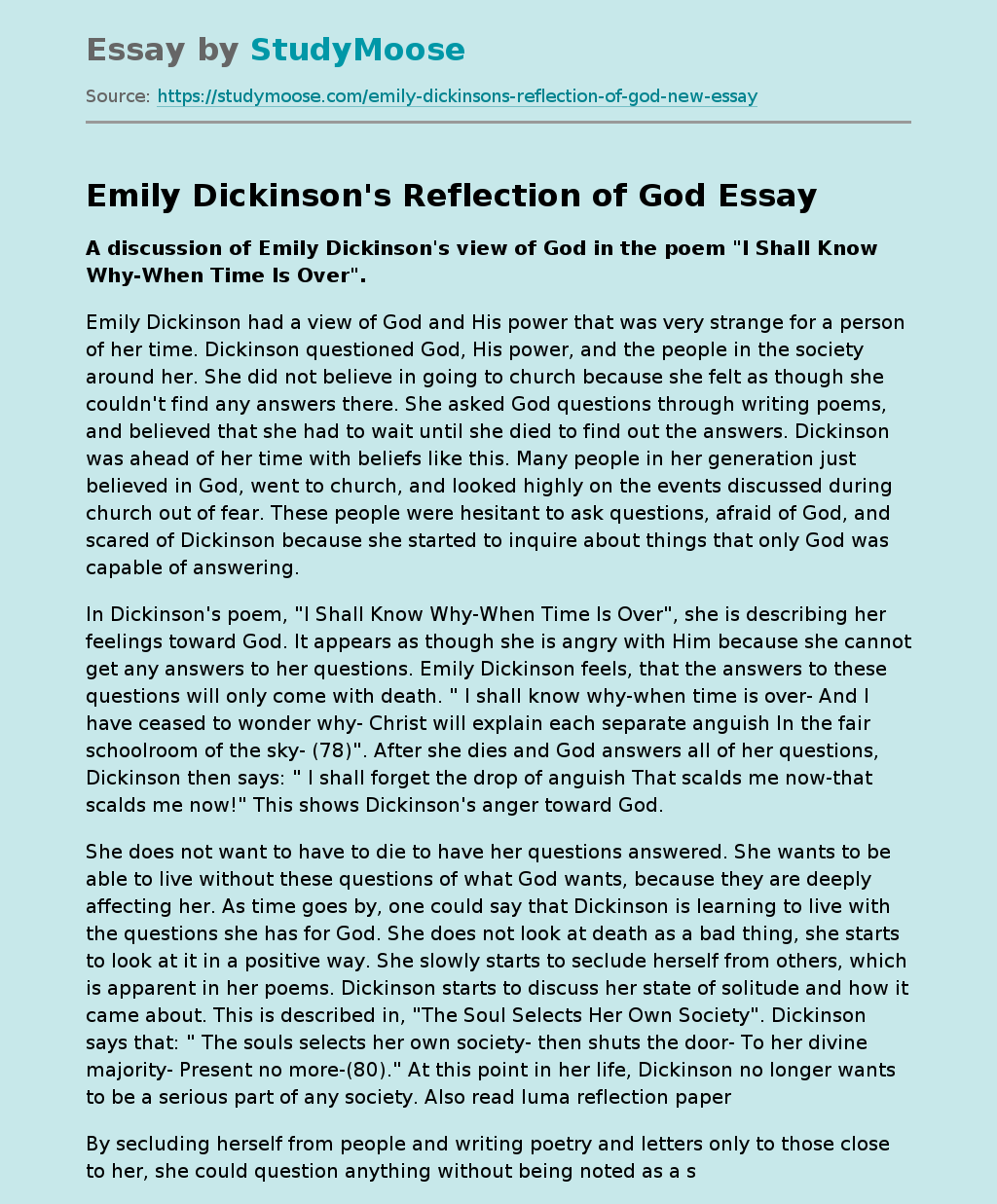