Emily Dickinson and her Vision of Death

A discussion of the poet Emily Dickinson and her use of the theme of death in her poetry.

Emily Dickenson, an unconventional 19th century poet, used death as the theme for many of her poems. Dickenson’s poems offer a creative and refreshingly different perspective on death and its effects on others. In Dickenson’s poems, death is often personified, and is also assigned to personalities far different from the traditional “horror movie” roles. Dickenson also combines imaginative diction with vivid imagery to create astonishingly powerful poems.

Don't use plagiarized sources. Get your custom essay on
“ Emily Dickinson and her Vision of Death ”
Get custom paper
NEW! smart matching with writer

In the 1862 poem, After Great pain, a formal feeling comes , Emily Dickenson presents death from the perspective of the bereaved. This poem is written in the third person, and informs the reader as to the actions and thoughts of the mourners through an omniscient narration. In contrast, most of Dickenson’s other death related poems show the reader the perspective of the dead. The vivid imagery in this poem functions to enhance the reader’s perception of the poem.

The following passage conveys a resplendent physical sense of coldness as someone is frozen to death: “This is the Hour of Lead Remembered, if outlived, As Freezing persons, recollect the Snow First Chill then Stupor then the letting go ” The innovative diction in this passage creates an eerie atmosphere all by itself. The effect of this passage is reminiscent of the famous macabre monologue at the end of Michael Jackson’s Thriller. Dickenson also excellently portrays the restlessness of the mourners in this following passage: “The Feet, mechanical, go round Of Ground, or Air, or Ought ” Describing the feet as “mechanical” shows the agitation and displacement of the mourners.

Also, in the next line, “Ought” most closely means “Emptiness.” Dickenson artistically shows us how the mourners are dealing with their loss in this next passage: “A Wooden way Regardless grown, A Quartz contentment, like a stone ” To deal with their loss, the mourners have separated themselves from the rest of the world. Their reaction to this catastrophe has become one of denial, causing each to develop “A…contentment, like a stone .” “Because I could not stop for death ,” another famous Emily Dickenson poem, renders a highly unusual personification of death. At first, it seems odd that Dickenson capitalizes “Death” as if it were a proper name. However, Death is described as a cordial and polite man throughout the poem, in sharp contrast with the traditional “grim reaper” bit. This next passage illustrates the difference between Dickenson’s Death and death’s traditional role: “Because I could not stop for Death He kindly stopped for me The Carriage held but just Ourselves and Immortality.” Instead of coming to steal life in the night, Death comes to pick the narrator up in a carriage. Like a gentleman, he then waits for her patiently, like he was taking her out on a date. “We paused before a House that seemed A Swelling of the Ground The Roof was scarcely visible Since then ‘Tis Centuries and yet Feels shorter than the Day I first surmised the Horses Heads Were toward Eternity ” The “House that seemed/ A swelling of the ground ” is obviously a coffin, or some other burial vessel. In the next stanza, the narrator tells us that she has been waiting for centuries; It appears that she is still in the carriage. She feels very optimistic about her journey, presumably because she is traveling toward eternity. Maybe Dickenson’s Death is only courteous to those who are worthy of heaven? Emily Dickenson had the rare talent to ingeniously transform death, a normally unwelcome subject matter, into creative and highly thoughtful pieces of literature. Dickenson’s poems show us new ways of looking at death and its effects. Through inventive diction paired with graphic imagery and sometimes shocking perspectives, Dickenson captures our imaginations with her timeless works.

Emily Dickinson and her Vision of Death. (2020, Jun 02). Retrieved from https://studymoose.com/emily-dickinson-and-her-vision-of-death-essay 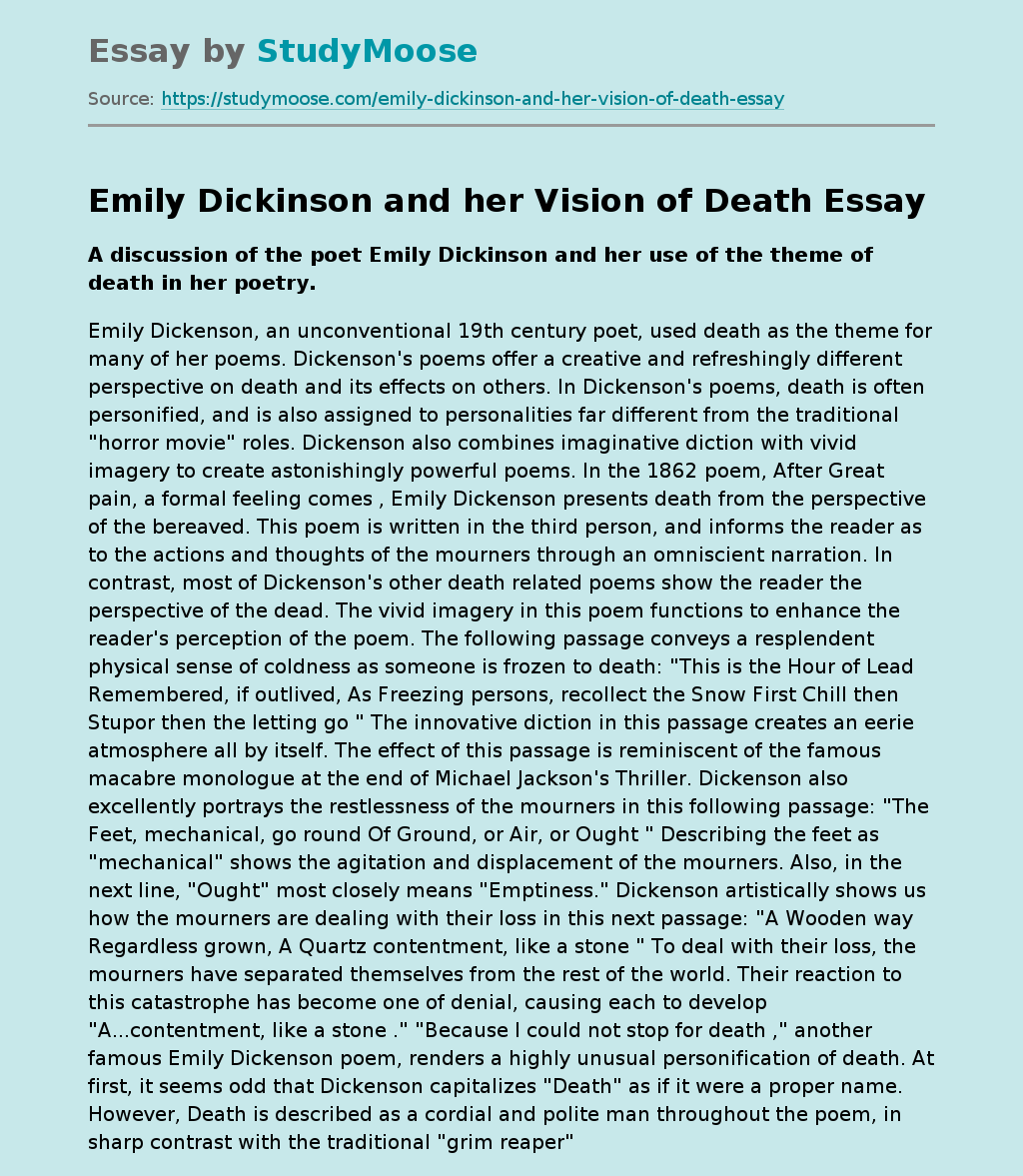