Don't use plagiarized sources. Get your custom essay on
“ Emerson and Thoreau Transcendentalism Beliefs ”
Get custom paper
NEW! smart matching with writer

Ralph Waldo Emerson was a very important author whose ideas were adopted and adapted almost immediately after his works came to light. First, in Emerson’s piece, Nature, he introduces the audience to an idea of a transparent eyeball. He states, “Standing on the bare ground, my head bathed by the blithe air, and uplifted into infinite space, all mean egotism vanishes. I become a transparent eyeball. I am nothing. I see all.

The currents of the Universal Being circulate through me; I am part or particle of God. ” (1112).

The most influential line in this quote is “all mean egotism vanishes. ” This exemplifies the idea that it is not a personal experience in which he is undergoing; it is, in fact, a spiritual involvement with the natural world. By using the impression of an eyeball, it shows that he sees all and is part of nature as a whole. “The ruin or the blank … is in our own eye. The axis of vision is not coincident with the axis of things, and so they appear not transparent but opaque.

The reason why the world lacks unity is because man is disunited with himself.

” (1133). While things in Nature should be seen as transparent, we view them as impervious, which affects our perception within. Emerson also states, “There is a property in the horizon which no man has but he whose eye can integrate all the parts, that is, the poet. ” (1112). This quote shows the importance of seeing the natural world as one. Emerson also wrote a poem called “Each and All. ” In this piece, his main theme is the idea of gratefulness in the natural world. He explains that every moment in nature is a whole.

He states, “I thought the sparrow’s note from heaven, Singing at dawn on the alder bough; I brought him home in his nest at even;—He sings the song, but it pleases not now; For I did not bring home the river and sky; He sang to my ear; they sang to my eye. ” (341). This part of the poem is momentous, because it explains that although the moment of hearing the sparrow sing is over, he has taken it in through the eye and now it is a memory as a whole. By using perception of the eye throughout his pieces, Emerson shows a vital key of knowledge in the transcendentalism ideals.

Secondly, Henry David Thoreau had a major influence on the transcendentalist belief with his work called Walden. Walden Pond was a place in which Thoreau went for two years to build his house and wrote a narrative based on his learning and understanding of himself and nature during his time spent there. The depth of the Walden Pond was about 104 feet deep and it was blue with a tint of green. This pond was unique because of its clearness of the water, and the fact that it almost looked like the iris of an eyeball. Throughout his work, Thoreau used the pond as a metaphor of his existence in nature.

” As we continue reading, Thoreau states, “I wanted to live deep and suck all the marrow of life. ” (1920). By relating his life to the Walden Pond and its significant depth, he establishes a powerful awareness of perception in nature. His point of perception is also demonstrated by how Walden, is structured. He goes through each season making cycles for what he completes and the perception in which he completes it.

In the idea of transcendentalism, the use of eyes and perception are very important because it creates a real life clarification as to what really matters. Becoming one in nature is a major element within the transcendentalism belief, and each author who believed this obviously put an emphasis on this metaphor. Ralph Waldo Emerson and Henry David Thoreau both had important transcendentalist ideas and contributed a great deal to other authors from then on. By allowing an eyeball and other uses of perception to explain all philosophy of transcendentalism, it simplifies the bigger meaning and allows readers to understand more effectively. 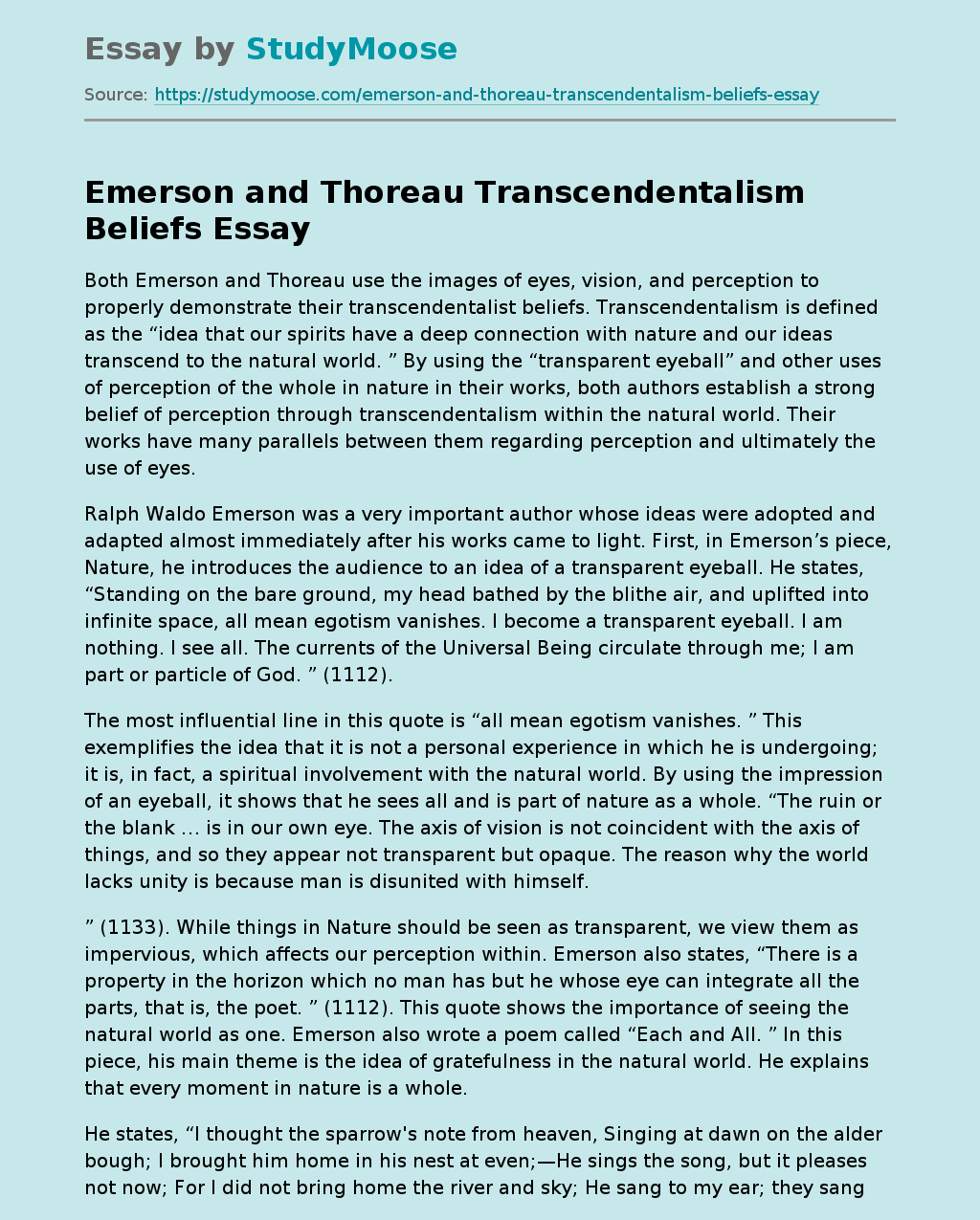