Have you ever wondered what it would be like to be a rock star? What exactly do you lack in your personality that prohibited you from becoming the next Michael Jackson or Madonna? It is well known that everybody has specific personality traits that are unique to him or her. Whether they are inherited, learned or developed during the course of a person’s life, these traits will inevitably shape us as individuals. We are going to look at three of the personality theories: Biological, Cognitive and Social Learning, and how they applied to a person who was even more popular than both Michael Jackson and Madonna.

Don't use plagiarized sources. Get your custom essay on
“ Elvis Personality ”
Get custom paper
NEW! smart matching with writer

It could only be the one and only Elvis Presley. Now, have you ever stopped to think of how great an impact Elvis Presley has had on our society? Even though he has been dead for over 23 years, the impact that Elvis continues to have on our society is astonishing. From the thousands of participants in annual Elvis look-a-like contests to people who go as far as fashioning their homes after Graceland, Elvis Presley’s spirit is alive and well in the year 2001.

What types of personality traits did this rock-n-roll icon possess?

What were some of Elvis’s early influences, which eventually led him to become known as the King of Rock and Roll? Did these influences eventually lead to his untimely death? Often when we think of celebrities, we associate only what we know of them from the media. We do not consider that regardless of their status in society, they are just flesh and blood like the rest of us.

We may even have the misperception that their lives were without the same pitfalls or influences that we, as ordinary people are exposed to.

As you will see, Elvis was by no means privileged, at least not in the beginning. In fact, he came from very humble beginnings and faced many struggles early on in his life. Circumstances that most of us were very fortunate not to have experienced. When people consider Elvis Presley, the entertainer, the memories are filled with remembering a great singer who changed the direction of music. The public named Elvis the King of Rock and Roll and through his music, he lived up to this title.

But aside from the public persona people were so familiar with, there was a great deal of Elvis that was obscure. The biological aspects and biological personality traits of Elvis’s life are probably the most unfamiliar as these factors are not as obvious as others. However, there is a considerable amount of biology that has contributed to how Elvis Presley evolved into the icon still revered by many to this day. Basic biological facts of Elvis that can be rattled off by any true Elvis fan are that he was the second born twin on January 8, 1935 at 4:35 a. . in Tupelo, Mississippi to Gladys Love Smith and Vernon Elvis Presley (Elvis, 2001).

His twin brother, Jesse Garon was stillborn. Additionally, there were specific biological traits that Elvis inherited from his parents. For example, although Elvis’s mother, Gladys grew up in a strict household, she had a great deal of passion for singing and dancing. Gladys was considered a great dancer and loved to perform, soaking in the applause and smiles of her admirers. She had a strong sense of rhythm and loved to abandon herself to music.

Gladys was also an extremely outgoing person and had a positive personality. It is obvious to see where Elvis’s musical ability, outgoing personality, and love of show business came from. Contrary to the personality traits Elvis inherited from his mother, those characteristics inherited from his father, Vernon, were of a different nature. Vernon Presley grew up in household lacking structure and affection. He had a very distant relationship with his father. His father, J. D. Presley, was well known as a drinker and womanizer.

J. D. would leave the family for days at a time only to return drunk or after being in jail. Vernon suffered low self-esteem and had difficulty motivating himself. Like his father, he was not a positive influence or a motivating factor in Elvis’ life. Vernon spent time in jail when Elvis was three years old and was seldom around during the influential years. It is clear that the behavior exhibited by Vernon’s father was passed on to him. Although, he was involved in Elvis’ musical career as a manager, the distance between them was apparent.

Elvis often referred to his father as Vernon instead of dad. The behavior passed on to Vernon by his father, consequently was passed on to Elvis. This became more apparent in the marriage between Elvis and Priscilla. Mate selection plays a factor in the biological theory and, interestingly, the marriage between Elvis and Priscilla supports this theory. Elvis loved Priscilla a great deal. He was attracted to her innocence and strong family values. He met Priscilla a year after his mother’s death. It was Priscilla’s wholesomeness that reminded him of his mother.

He even went so far as to abstain from sex with Priscilla while she lived with him until they got married. However, as admirable as this was, Elvis displayed a great deal of his father’s behaviors before and after the marriage. Although being away from home can be attributed to a grueling tour schedule as well as making movies when he was not touring, nonetheless, he was not around for Priscilla. It is also well known that Elvis had affairs with a number of women. When Elvis was at home, his nights were spent partying with his friends and his days were spent sleeping.

This behavior contributed to the demise of his marriage. However, regardless of the troubles in his personal life, his music continued to not only touch those who listened, but provided Elvis with an opportunity to express his inner feelings. Through this, he unknowingly applied cognitive reasoning to not only continue to entertain and inspire the public, but to also get him through some of the most difficult times in his life. The cognitive approach addresses personality differences in regards to the way people absorb and process information (Jerry M. Burger, 2000).

For example two people may attend an Elvis Presley concert. The first person is a devoted fan to Elvis and is looking forward to the show. The second person is not a huge fan and is going along just to keep the other person company. The first person takes in the music and the lyrics and thoroughly enjoys the show. The other person knows in advance that he or she will not like the music and focuses more on what is going on within the audience. The cognitive approach to personality would have predicted this to happen.

Cognitive personality theory believes that how one reacts to a situation determines the outcome for that person. Terms that have been used to describe this theory are the power of positive thinking or self-fulfilling prophecy. Both of these terms recognize that many times the human mind determines the outcome of events before they even take place. Elvis used a cognitive reasoning early in his life and continued to apply this approach depending on the situation. Unfortunately, Elvis’ entire life was very public. Often, specific actions or behaviors were critically publicized to his detriment. 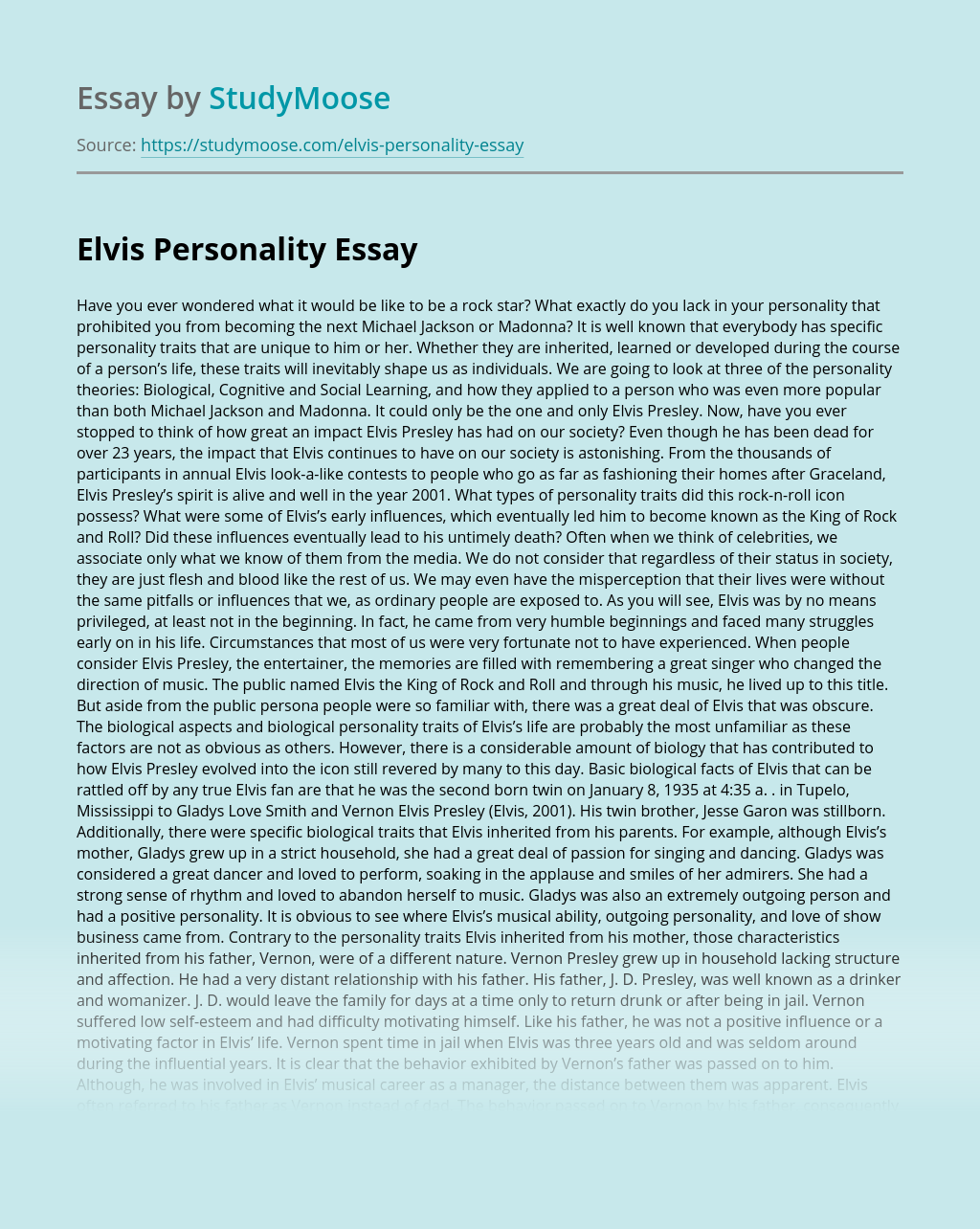