Don't use plagiarized sources. Get your custom essay on
“ Elie Wiesel Quotes ”
Get custom paper
NEW! smart matching with writer

Others have been here before me, and I walk in their footsteps. The books I have read were composed by generations of fathers and sons, mothers and daughters, teachers and disciples. I am the sum total of their experiences, their quests. And so are you.” ― Elie Wiesel “Human suffering anywhere concerns men and women everywhere.” ― Elie Wiesel, Night “For the dead and the living, we must bear witness.” ― Elie Wiesel “Never shall I forget that night, the first night in camp, which has turned my life into one long night, seven times cursed and seven times sealed….

Never shall I forget those moments which murdered my God and my soul and turned my dreams to dust. Never shall I forget these things, even if I am condemned to live as long as God Himself. Never.” ― Elie Wiesel, Night “One person of integrity can make a difference.” ― Elie Wiesel “If the only prayer you say throughout your life is “Thank You,” then that will be enough.” ― Elie Wiesel “Only the guilty are guilty. Their children are not.” ― Elie Wiesel “Write only if you cannot live without writing. Write only what you alone can write.” ― Elie Wiesel “Which is worse? Killing with hate or killing without hate?” ― Elie Wiesel “I pray to the God within me that He will give me the strength to ask Him the right questions.” ― Elie Wiesel, Night “I swore never to be silent whenever and wherever human beings endure suffering and humiliation. We must always take sides.” ― Elie Wiesel “Wherever men and women are persecuted because of their race, religion, or political views, that place must — at that moment — become the center of the universe.” ― Elie Wiesel “No human race is superior; no religious faith is inferior. All collective judgments are wrong. Only racists make them” ― Elie Wiesel “Then came the march past the victims. The two men were no longer alive. Their tongues were hanging out, swollen and bluish. But the third rope was still moving: the child, too light, was still breathing… And so he remained for more than half an hour, lingering between life and death, writhing before our eyes. And we were forced to look at him at close range. He was still alive when I passed him. His tongue was still red, his eyes not yet extinguished.

Behind me, I heard the same man asking:
“For God’s sake, where is God?”
And from within me, I heard a voice answer:
“Where He is? This is where–hanging here from this gallows…”

“There are victories of the soul and spirit. Sometimes, even if you lose, you win. ” ― Elie Wiesel “We must take sides. Neutrality helps the oppressor, never the victim. Silence encourages the tormentor, never the tormented. Sometimes we must interfere. When human lives are endangered, when human dignity is in jeopardy, national borders and sensitivities become irrelevant. Wherever men and women are persecuted because of their race, religion, or political views, that place must – at that moment – become the center of the universe.” ― Elie Wiesel, The Night Trilogy: Night/Dawn/The Accident “I shall always remember that smile. From what world did it come from?” ― Elie Wiesel, Night “For the survivor who chooses to testify, it is clear: his duty is to bear witness for the dead and for the living. He has no right to deprive future generations of a past that belongs to our collective memory. To forget would be not only dangerous but offensive; to forget the dead would be akin to killing them a second time.” ― Elie Wiesel,
Night “I don’t want my past to become anyone else’s future.” ― Elie Wiesel

“We must not see any person as an abstraction. Instead, we must see in every person a universe with its own secrets, with its own treasures, with its own sources of anguish, and with some measure of triumph.” ― Elie Wiesel “Most people think that shadows follow, precede or surround beings or objects. The truth is that they also surround words, ideas, desires, deeds, impulses and memories.” ― Elie Wiesel “Night is purer than day; it is better for thinking and loving and dreaming. At night everything is more intense, more true. The echo of words that have been spoken during the day takes on a new and deeper meaning. The tragedy of man is that he doesn’t know how to distinguish between day and night. He says things at night that should only be said by day.” ― Elie Wiesel, Dawn 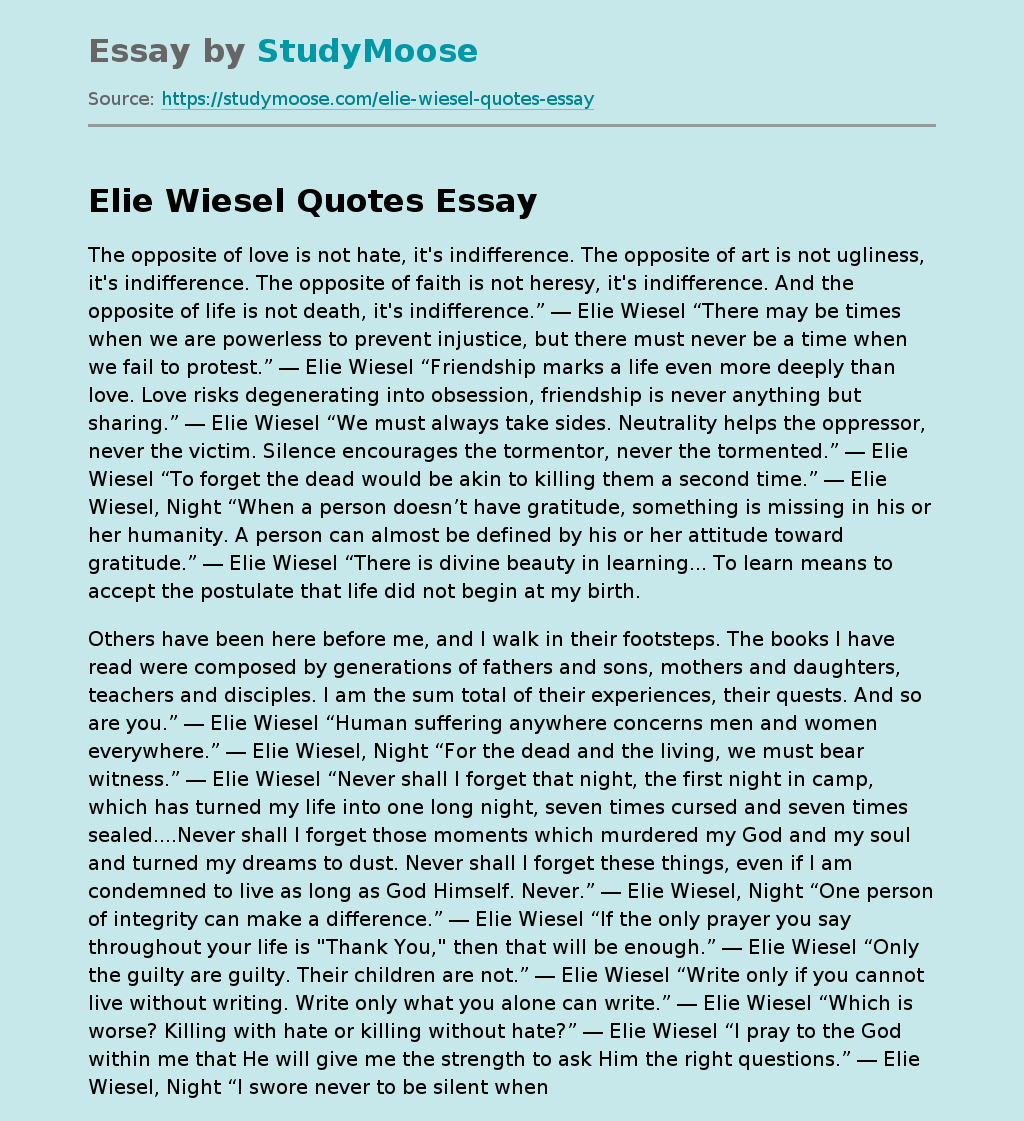