Don't use plagiarized sources. Get your custom essay on
“ Electrical safety ”
Get custom paper
NEW! smart matching with writer

2. Conduct an Internet search for information on home fire safety. Discuss several common, careless practices that may lead to a home fire while conducting a home physics experiment. (2 points)

There are a number of dangers that may lead to a fire when doing a physics experiment if one is being careless. Some common examples are as follows; handling flammable liquids carelessly, a Bunsen burner or other gas emitting equipment that has cracks or leaks, not heating flammable chemicals in a water bath and a student who is not paying attention and leaves an open flame unattended.

All these examples may cause dangerous situations and can all be easily prevented should the experiment be done with caution.

Pens, pencils and all other materials should be kept out of your mouth. Avoid having long hair dangling in the work space as well as loose clothing, jewelry and wearing open toed shoes as these can all cause dangerous situations for injury. Always dispose of glass material in the appropriate labeled container, know all locations for emergency equipment such as a fire extinguisher and first aid kit and always know how to operate the equipment you are using before doing so.

4. Discuss the steps of the scientific method. (5 points)

The scientific method is a series of steps we use in order to perform an experiment. The first of these steps is to observe, at this stage you are creating an interest or wonder in something. The second step is to hypothesize or form a question of what you think the outcome of the experiment will be with support from your observations. Experimenting is the third step which includes two groups both identical except for the variable you are trying to test called the independent variable. These groups are known as the control (remains unchanged) and the experimental group (the one with a changed variable). The conclusion is the final step and at this stage the hypothesis is either accepted or rejected.

6. Imagine you are a tour guide for a major science laboratory. Write a short script for a tour that summarizes what scientists should (or shouldn’t) wear in the lab, what safety precautions they should take, their cleanliness rules, and what they should do in case of an accident. Your script should contain at least ten of the rules or other important points from the lesson. (5 points)

“Good morning prospective scientists my name is Heather Klein and I will be your tour guide this wonderful day. We are going to begin our tour with some important safety guides in order for everyone to be the best, safest scientists they can be!” “There will be no eating or drinking out of an open container in the lab! We are all to be wearing close toed shoes, with no baggy clothing or jewelry and hair is to be tied back as all of these can cause dangerous situations. It is important that no one wear contact lenses and we all wear glasses or goggles when working with dangerous chemicals. Before beginning labs we are to disinfect our counter tops with a 10% bleach solution.

Upon beginning the lab each of our scientists makes sure there is only necessary materials at the work place. They are also very aware of how to use the equipment before they begin and make a mental note of all the exits and safety material in case of an accident. When it’s time to dispose of chemicals our scientists always do so in the appropriate containers especially glass. Should there be an injury in the lab, it is to be reported to the instructor or medical professional immediately. We always conclude our experiments with thoroughly cleaning the area and our hands as dangerous chemicals may go unnoticed otherwise. We hope everyone enjoys the tour and respects the important safety rules.”

7. How can you use the information regarding laboratory safety, or how can you apply this knowledge to your everyday life as a non-scientist? (2 points)

The knowledge of laboratory safety may be used in everyday life in a number of ways. In the laboratory it is important to pay attention to what you are doing, use something and then put it back in the correct location and not use equipment you are unfamiliar with. These same ideals can be incorporated into everyday life as it is also important to pay attention, not leave dangerous items unattended and to not use things without first permission or knowledge on how to use them. Even non-scientists should abide by these rules in everyday life as it can prevent accidents or dangerous situations. 8. In the morning, you get in your car on the way to work, turn the key, and nothing happens! Use the steps of the scientific method to explain how you would solve this problem. (4 points)

In order to solve the problem of my car not starting I would use the steps in the scientific method to first observe if there are any obvious signs as to why the car isn’t starting. I would then form a hypothesis as to why I believe the car isn’t starting such as, “The car wont start due to the fact the battery is dead from a light being left on”. In order to test my experiment I would hook my car up to another car via some jumper cables and then again try and start it again. If it worked my hypothesis is correct and I am off to work for another day. If the car does not start than I am incorrect and I must again observe, hypothesize, test my hypothesis in experiment and find my conclusion.

Importance of Electrical Services in Buildings

Electricity has been part of our lives. It has brought many things that surely have made many wonders and life would seem so hard without it. Electricity powers our light, heating, electronic appliances such as computers and television, and a host of essential services that we take for granted. However, electricity has much more important aspects because it is a fundamental feature of all matter. Electricity is the force that holds together the molecules and atoms of all substances. The type of electricity that is most familiar to us is electrical current. This is the flow of electrical charges through a substance called a conductor such as a metal wire. This flow happens beacuse some of the negatively charge electrons circling the nuclei of the conductor’s are held loosely. The electrons can move from one atom to the next, producing and electrical current.

Electricity has become something we rely on to live our lives, but it was by no means an overnight discovery. Over the last two hundred years it has developed from a scientific phenomenon to part of everyday life. One of the first applications of electricity was the first incandescent light bulb in around 1870.

The electric overhaul of society obviously brought many fresh new dangers with it, but it eliminated some of the old ones, like the naked flames of gas lighting that was commonly used in homes and factories then.

The Joule heating effect that can be found in light bulbs is also present in electric heating. Electric heating has been thought of as wasteful in the past because in order to create that heat energy, heat has already been used in the power stations

Denmark (among a few other countries) has issued a new law restricting electric heating use in new buildings, if allowed at all. As well as heating, electricity provides a hugely beneficial source of refrigeration. As temperatures get hotter, the demand for air conditioning gets higher, increasing the amount of energy used, and so climate change is increasing in a snowball effect.

Electricity is of course used in telecommunication. The electrical telegraph was one of the earliest applications that electricity was used for, commercially demonstrated by Crooke and Wheatstone in 1837. 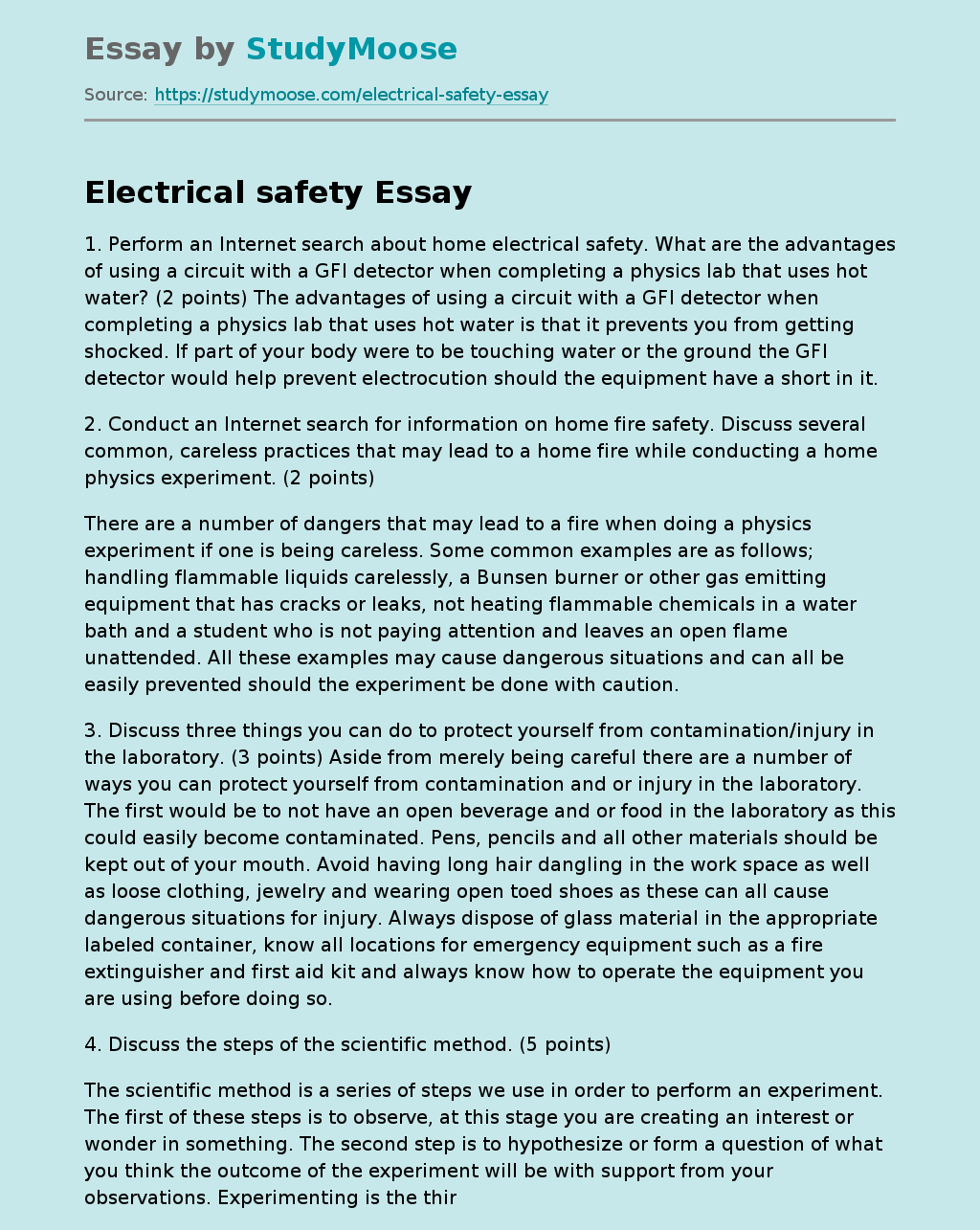