As a pioneer of green technology car manufactory, Tesla Motors has placed himself in the U. S. automotive industry. Tesla Roadster is considered to be a cash cow in 2009, and it is the only electric cars have been mass product. However, after the competitors had entered the market, alternatives joined the battle of green technology car, such as hybrids, fuel cell ,etc. Furthermore external environment has changed. Elon Musk, the co-founder and head of product design, is facing a question either to sell it or continue to run three companies including Tesla Motors at once.

Don't use plagiarized sources. Get your custom essay on
“ Electric Vehicle and Tesla Motors ”
Get custom paper
NEW! smart matching with writer

Base on my opinion, in order to analyze Tesla Motors’ case, external environment analysis on electric car industry should be done first, due to the factor that it will provide a better understanding of threats and opportunities that Tesla Motors may have in the future operation. The Pestel Framework

(C 41) It is obvious that government is willing to encourage both to apply green technology on auto industry and to increase consumption by add tax credit for electric drive vehicles.

Economic crisis aggravated financial pressure globally which is a definitely negative effect on luxury industry, include in Tesla Motors.

$100,000 per unit had kept plenty of potential customers away, and the crisis makes it even worst. However, from personal experience. in China, actually there some people are getting richer even under the strike of financial depression. If Tesla could take actions, it would be an absolutely great opportunity. Increase of gasoline price has shifted consumers’ behavior toward to buying high fuel efficiency cars. Particularly, in European countries where oil price is much higher than in U. S.

The Big Three have fallen which provides another advantageous chance that Tesla can use to enforce market position.

Therefore, they would be potential consumers for Tesla. Increase in world population will be a opportunity because demand for cars will increase along with population.

Other car technologies are threats to battery electric vehicles, but on other side of a coin, they all have shortcoming, such as it is not easy to get ethanol for flexible fuel vehicles.

Although battery electric vehicles have zero emission which is an advantage comparing with other alternatives, how to deal with the used batteries will be a issue. If batteries can be recycled appropriately, battery electric cars will have the strongest competitive advantage.

In 1990, the California Air Resource Board passed a mandate for introduction of zero emission vehicles. The act specified that two percent of the vehicles produced for sale in California had to have zero emissions by 1998,, increasing five percent in 2001 and 10 percent in 2003. (C 40) No doubts that government will help electric cars both on development and marketing. Legal factors will be considered as advantages in electric industry. After having made a brief analysis on external environmental factors, I think it has an appropriate external condition to continue doing the electric industry. However, the technology of batteries will be the main constrain the development of battery electric cars industry.

Therefore, it is still challenge to decide whether sell Tesla Motors or not. Further analysis is required on the industry level which will clarify more on competitive advantage, market position and internal factors. In addition, Elon Musk is running three companies now, It will not be surprising if he sell the company because of personal limitation, even though the future of electric would be bright, according to my analysis. 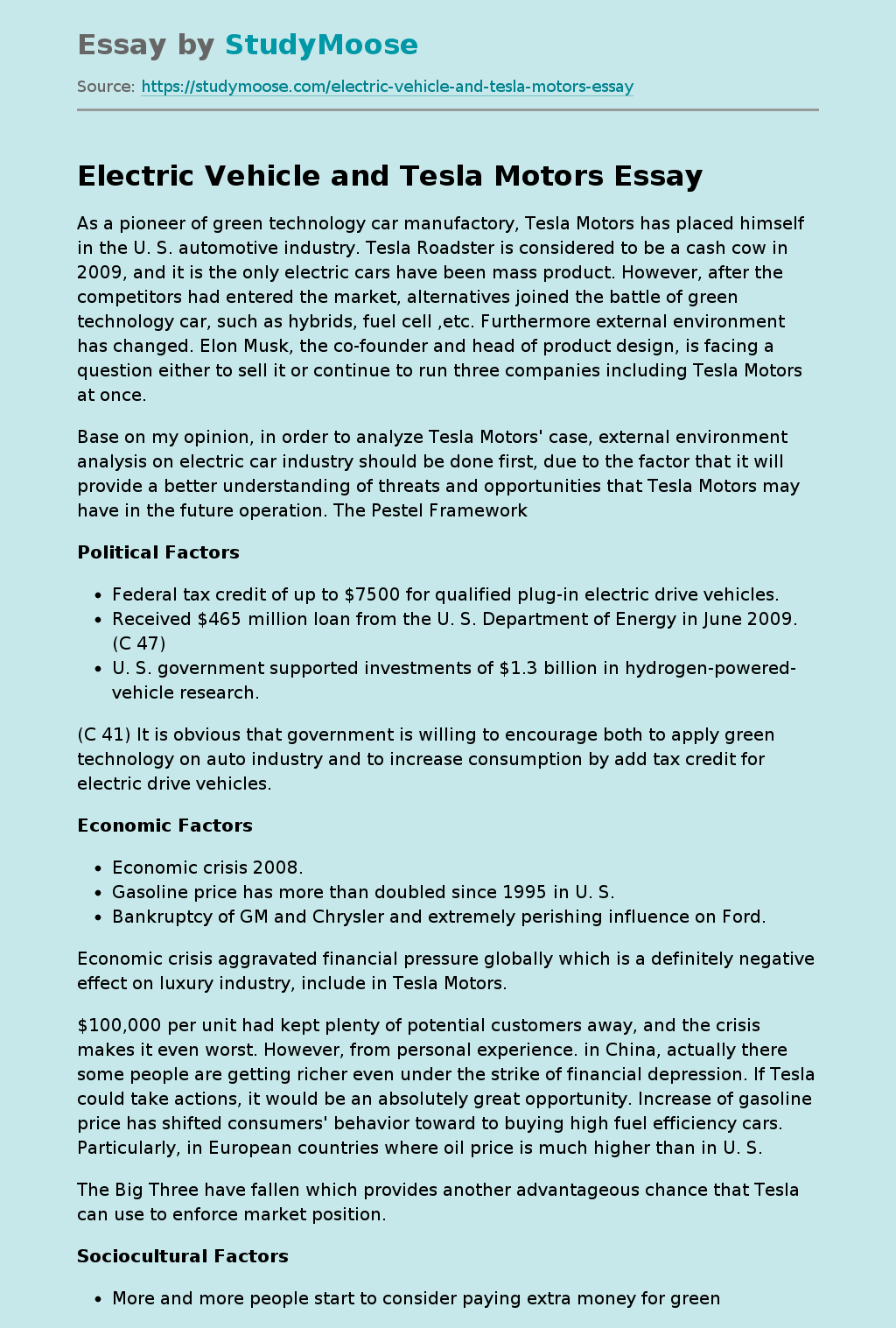