Just about everyone wants a car but no one Wants to pay for gas well now thanks to technology we don’t have to yes thanks to the discovery of the electronic car people can travel solely on the power of electricity but most people say that Unless some new type of battery is invented these electronic Car are nothing more than a dream but these are far more than a dream and very much so a part of reality But what does the future hold for these cars.

Don't use plagiarized sources. Get your custom essay on
“ Electric Cars Speech ”
Get custom paper
NEW! smart matching with writer

Well electricity is already a large part of our lives so to start using electricity powered cars would not be so much of a change from our normal routine as people may seem to think And they’re already many people using these electrical cars one man mentioned That he uses The Corbin Sparrow (a single person electric vehicle) As his primary commute vehicle he has a 50mi.

Total commute To and from work mostly freeway so not that much stop and go traffic but once he gets to work his batteries drained about 50 percent but because the car does not require a special charging stations he can plug it into any standard three prong outlet So he pluges his car and at work and returns home on a 100 percent charge Saving gas and money every day allowing his car to pay for itself but Basically, here’s what the Sparrow offers: ? Seats 1 person, and ample space for laptop, papers and small grocery run.

13 lead acid batteries, different in detail from conventional automotive batteries, but not fundamentally so. The batteries provide for a very low center of gravity. ?Fiberglass body for keeping the weight down while increasing the energy efficiency considerably. I’m averaging . 16KwH/mile or thereabouts for my typical commute. ?110v charging that takes about 8 hours.

However, in my typical usage, I get to 80+% in less than 2 hours, and recharging stations are nearly *everywhere* however an extension cord can be helpful ? and a top speed of about 80mph now this may be good for the average driver or maybe-trips back and forth to and from work but what would you do for a long drive with no time in between to recharge this car.

This car would definitely not be the car for the job of but thats where our next car, comes in 25 February 2000 — DaimlerChrysler’s engineers might have missed unveiling their third iteration of the ESX Mybrid (mild-hybrid) concept car at the North American International Auto Show in Detroit this year but it appears the delay was definitely worth the wait. Last week the company showed the ESX3 to the press in Washington, D.

C. , an event which marks the achievement of the first official milestone of the 10 year-long USPartnership for a New Generation Vehicle program in which all three US car makers have now developed fuel-efficient, high mileage vehicles. From the outset of the ESX program, DaimlerChrysler engineers have sought ways to not only achieve the performance goals of PNGV but have striven to reduce the cost premium associated with hybrid electric technology. In the ESX3 they have cut the cost in half from the $15,000 of the ESX2 to just $7,500 in two years time.

The five passenger ESX3 achieves 72 mpg, up two miles from the more aerodynamic ESX2. It’s “mild-hybrid” or mybrid drive train takes a similar approach to that of both Ford and GM PNGV cars, mating a 1. 5 liter, all aluminum direct-injection diesel engine to a 15 kilowatt electric motor. Like the Toyota Prius, the 106 pound lithium ion battery pack is wedged between the rear passenger seat and trunk which provides 16 cubic fee (450 liters) of cargo space. An important component in of the ESX Mybrid system is its EMAT transmission system which utilizes two computer-controlled clutches.

The EMAT system combines the smoothness of an automatic transmission with the added fuel efficiency of a manual. The driver sees the normal selection of park, drive, neutral and reverse. One of the most remarkable features of the ESX3 Mybrid drive is its weight which is less than a conventional gasoline engine. The three-cylinder diesel weighs just 250 pounds (113kg) and the air-colored electric motor just 76 pounds (33kg). DaimlerChrysler says that the ESX3 meets all the emissions targets originally set in 1993.

However, it acknowledges that there is still much to be done to meet future emissions standards including further work on low sulfur and synthetic fuels, new exhaust aftertreatment technologies and cleaner combustion processes. OMAHA, Nebraska — April 19, 1998. Sport utility vehicles are hot! Sales of the truck-like vehicles are booming in the USA. Once the purview of Jeep, Ford and Jimmy, now virtually every car maker has entered the fray including Mercedes and Lexus. And the folks buying these behemoths don’t seem deterred by their hefty sticker prices and the 70’s era gas mileage that comes with them, not to mention a truck-like ride.

While questions are now being raised about both their environmental impact and safety, sales continue to soar. The plain fact is, Ute’s are “in. ” After two years and 300,000 total driving miles in Japan and the US, late last year Toyota began leasing a sensible sport utility vehicle that offers many of the perceived benefits of the standard Ute, but with zero tailpipe emissions. While the RAV4-EV shares many features, including body styling and interior appointments, with its IC-engine sibling, the similarities end there.

As Mark Amstock, Toyota’s manager of North American Alternative Fuels Program, states in the video that accompanies this feature, the RAV4-EV is not a conversion. It has been engineered from the pavement up. And while it weighs 500 pounds more than the gasoline version, it offers virtually all the amenities, performance and handling of its fossil-fuel counterpart. In 1995, Toyota placed 20 prototype RAV4-EVs in the field, ten in Japan and ten in the US. These were a mixture of lead-acid and nickel metal hydride battery versions that saw service in LA, San Francisco, Sacramento, Detroit and New York.

The lessons learned from these field tests have been integrated into the 1998 model, including improved HVAC system, battery management and cooling systems, 5 door, 5 passenger seating, improved motor torque and lengthened wheelbase for a better highway ride. The heart of the EV model is its 50kW permanent magnet motor and 24 nickel metal hydride batteries rated at 288 volts. The maintenance-free electric motor is neatly integrated into the single speed, front-wheel transaxle and is rated at 67 bhp at between 3,100 and 4,600 rmp. This gives the 3440 lbs. vehicle a combined city/highway driving range of 125 miles and a top speed of 78 mph.

According to Armstock, these are “real world” numbers and not just wishful thinking. One of the advantages of using the SUV platform is battery placement. The high curb-height let Toyota engineers place the 900 lbs of batteries under the floorboard, outside the passenger cabin. This gives the vehicle the same usable space as its IC-engine version. One of the lessons learned from the tests in the US, especially in Michigan and New York was the necessity of an adequate heating and cooling system. HVAC systems in automobiles have huge energy requirements which cut into the range of an EV, even one equipped with advanced batteries.

Toyota engineered two new features to address this need. They introduced a new gas-injection heat pump system to handling both heating and air conditioning. They also installed controls which will preheat or pre-cool the vehicle while its being recharged. The vehicle operator sets an onboard timer which begins heating or cooling the SUV while it is still connected to its charging source. Since it takes several minutes for a conventional car to heat up in the winter or for the AC to become effective in the summer, the RAV4-EV’s system offers a distinct advantage.

Charging is accomplished by an on-board 220-volt, 30-amp conductive charger that takes about 6. 5 hours to completely recharge the car. “Refueling” the vehicle can be done at home, the workplace or public charging station. The RAV4-EV has power-assisted 4-wheel, anti-lock (ABS) braking. The system features 10 inch brakes (front disk/rear drum) instead of the usual 9 inch found on the gasoline model to handle the vehicle’s added weight. It also includes regenerative braking which converts much of the vehicle’s forward motion back into electricity to recharge the batteries while driving.

As the vehicle slows or the driver taps the brakes, the electric motor switches to generator-mode. This enables the driver to actually add to the RAV4-EV’s range with intelligent driving practices. The hallmark of the current boom in Ute sales is the plethora of amenities that come on these brutes, and the RAV4-EV is no slacker in this regard. It comes equipped with power-steering, deluxe AM/FM stereo cassette audio system, digital clock, power-windows, rear-window defroster, dual airbags, vanity-mirrors, and all the rest.

The RAV4-EV is currently available only in California, New York and Massachusetts, due largely to their ZEV mandates which require companies like Toyota have 2% of their sales be zero emission vehicles, this despite the fact that there was (as of December, 1997) only one public charging station in all of New York state. Armstock explained that Toyota’s current marketing efforts are focused on fleet operations, rather than the consumer market; electric utility companies being the earliest customers. They lease for a one-time payment of $16,000 for 36 months, or $477 a month for the same period.

I found the RAV4-EV a thoroughly enjoyable driving experience the brief time I was behind the wheel. It handles well, accelerating as briskly as a 4 cylinder IC-engine version. It’s quiet inside, though the low rolling-resistance tires are a bit noisy. It certainly brakes well as I learned when an inattentive driver tried to pull out in front us during our test drive around Disney World. The RAV4-EV will make an ideal intra-city commuter for many motorists. Since the average American workplace commute is under 50 miles round trip, the RAV4-EV can get you there and back again with style and comfort.

Toyota’s Armstock made an interesting comment near the end of our test drive. When asked when we can expect to see the RAV4-EV go on sale to consumers, he remarked that the technology is advancing so rapidly that he expects the current model to be as obsolete in thee years as a pesonal computer with an Intel 286 micro-processor is today. That’s an exciting prospect, considering how well integrated the RAV4-EV is even now. Regardless of the pace of technological change, this is one nicely done SUV, one that makes a lot of sense right now, especially now. END STORY/ 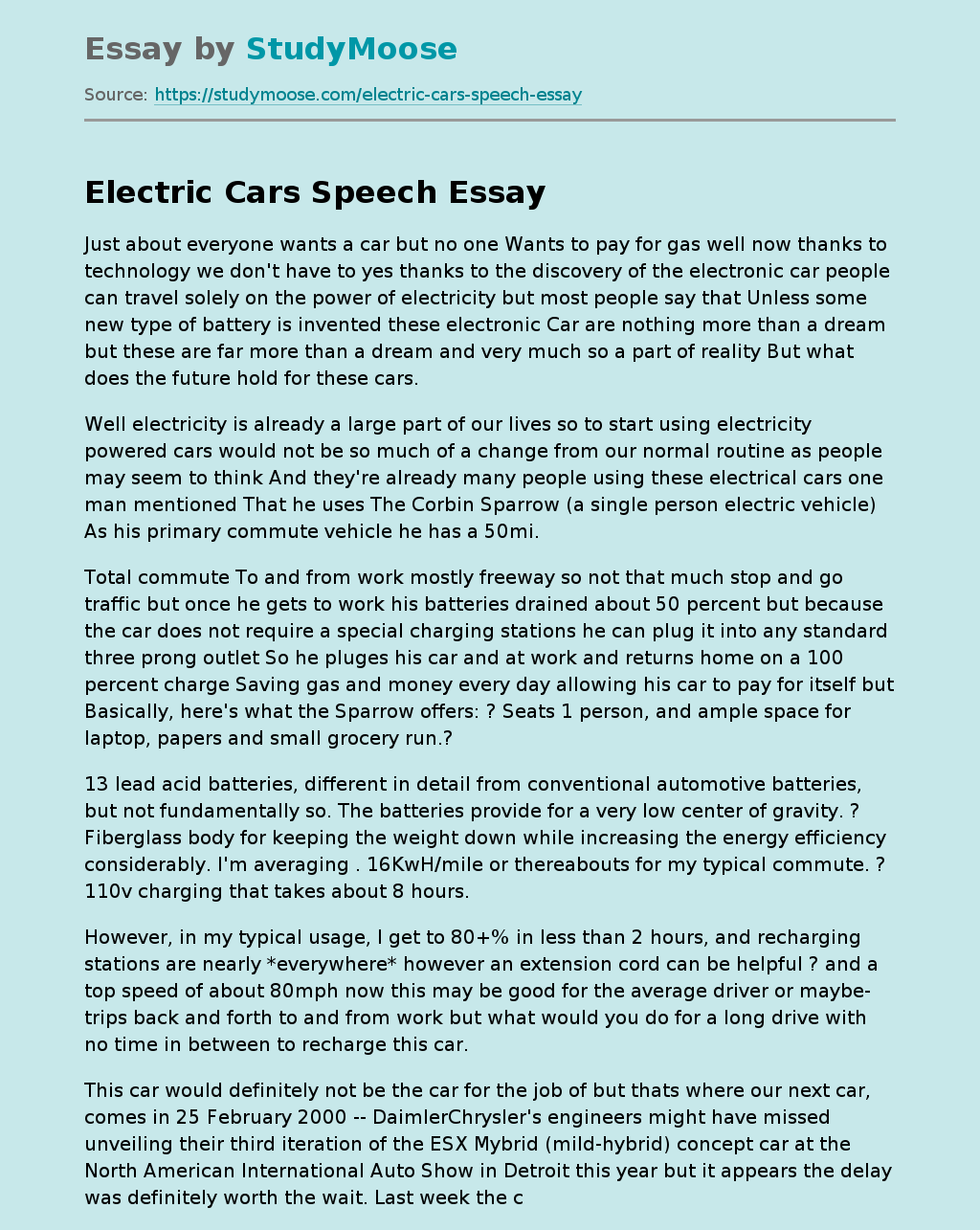