Disengage because of reduced physical health and loss of social activities * Cummings (1975) argued that older people would experience a reduction in social contact as they grow older and becoming increasingly ‘individual’ * ‘disengaging is a natural part of aging’ *  Everyone expects death, and one’s abilities will likely deteriorate over time. As a result, every person will lose ties to others in his or her society. “aging is an inevitable, mutual withdrawal or disengagement, resulting in decreased interaction between theaging person and others in the social system he belongs to.

“Embardos disagreement.. * Said theory was discredited for many reasons * Argues that majority of older people remain socially involved with family and friends .

Maybe choose to spend more time with people they are close to rather than seeking new friends * Current data from the office for national statistics supports the view that a majority of older people enjoy social networks * if people only interact with close friends does this mean they are disengaged? * Argued that older people need to disengage but * They need to remain ‘active’ in order to stop disengagement going too far * Argues that society should provide older people with activities * Society should provide them with education of how to make use of the activities * It is very important for older adults to remain mentally active and maintain an interest in life and enjoy the company of others * The theory assumes that a positive relationship between activity and life satisfaction| M2 – case study 1

Alan is a 76 year old man who has recently lost his wife.

He is completely disengaged. He does not try to socialise as he is still grieving from the loss of his wife and can’t seem to pull himself around. Firstly the social disengagement theory will affect Alan’s social development; he is disengaging himself from any social activities or communications as he is grieving. This will have a negative effect on his social and emotional development as he is not talking to people to help him feel better or to get things ‘off his chest’, keeping it all locked away.

This will have a negative effect and will make him a lot worse. It may also have a negative effect on his physical or physiological development as he may be susceptible to depression. This may lead to physical harm. The argument against this theory will however have a positive effect on Alan as he will be socialising with other people, helping tae his mind off the loss of his wife. He will also be engaging in social activities keeping his mind active positively effecting his intellectual development, and again taking his mind off his loss.

The argument to this theory would also have a positive effect on his physical development as he will be getting around more when joining in activities. Lastly joining these activities will reflect on Alan’s emotional development and maybe help him to cope with his loss more as he is not constantly grieving over it. Bromleys activity theory would have a positive effect on Alan’s, physical, intellectual, social and emotional development.

His social development will be effected greatly also as he will be constantly communicating with a lot of different people. Lastly his emotional development will be effected as he may cope with his loss a bit more successfully, and he may also discover a hobby he has taken a liking to. Case study 2 Geena is 86 years old and struggles to move around a lot. She is very upset that her mobility isn’t as strong as it used to be, and gets emotional at times when she tries to do something independently and cannot. Although she is independent she does not like being alone.

As Geena is a very independent woman, the social disengagement theory has a negative effect on her physical development as it states, she is disengaged because her restricted mobility to get around. Not only does this affect her social development, but her physical too as she is straining herself to complete tasks that are difficult for her. This also has a negative effect on her emotional development as it upsets her that she cannot complete daily things she feels she needs to do. This does not affect her intellectual development.

The disagreement to this theory would not affect Geena a lot as she is not disengaged. However it would affect her intellectual development positively if she joined a social networking site, as this would build up her knowledge of technology, effecting her social life also as she may get in touch with some old friends. This will not affect her emotional or physical development. Bromleys activity theory may affect Geena’s emotional development negatively as she has restricted mobility and would not be able to join any physical activities without becoming distressed and upset. 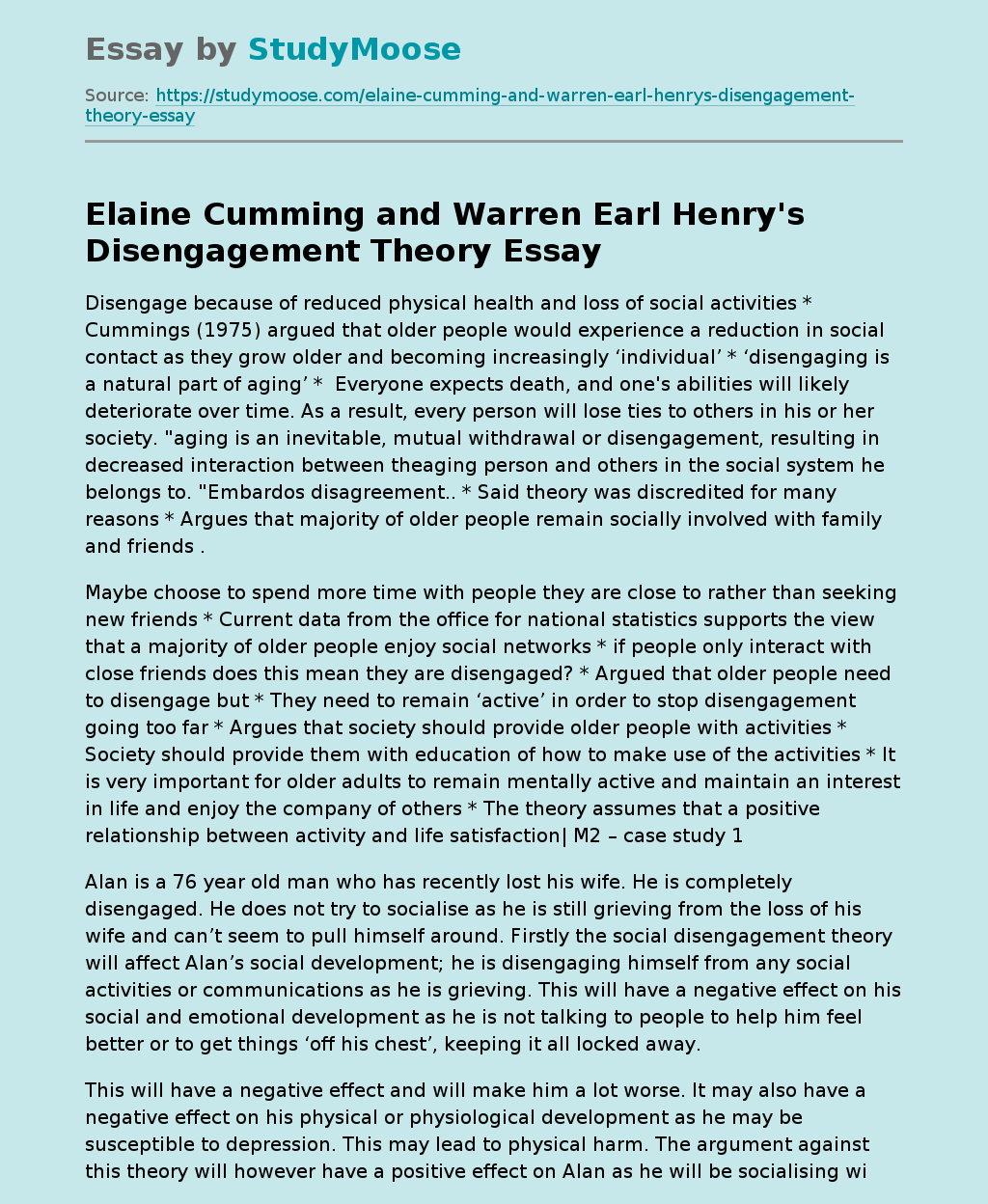