Latin American storytelling of the mythological Chupacabra, whose alleged sightings relate to those of aliens and vampires, regulate children’s behavior by implanting a fear of the unknown. Since 1995, stories about a strange, blood-sucking, goat-eating dog-like monster appear in many scholarly articles, journals, and books causing mass hysteria. With several misconceptions, witnesses believe the Chupacabra preyed on and mutilated goats and other farm animals. Articles, journals, books, and people’s stories have often compared and described the Chupacabra as a vampire from outer space.

Don't use plagiarized sources. Get your custom essay on
“ El Chupacabra: Legend or Beast ”
Get custom paper
NEW! smart matching with writer

Without proper research and knowledge, people draw conclusions of such creatures, but in time came to find such misconceptions to be false and integrate the creatures into story telling. Through DNA testing, carcasses of so-called Chupacabras result in identification of the creatures as wolves and coyotes infected with a disease called mange, and they prey on farm animals because of hunger and desperation. Throughout Latin cultures, adults pass on stories about monsters and the unknown, and they use these stories as a way to create discipline and obedience in children by embedding fear in them.

The elaborate study of the Chupacabra has given a new view and methods of understanding through studies and research to the areas of history and folklore, particularly in Puerto Rico and Mexico, to present day. Furthermore, in order to make sense of the Chupacabra situation, my paper presents logic and scientific reason to analyze Latin mythological stories. First, I will give a brief description of the history of the Chupacabra. Then, I will evaluate, analyze and describe how misleading reports and news; such as given by Lalo Lopez, Marc Davenport and Joyce Murphy, induces misconceptions in the public.

Then, I will illustrate the Chupacabra’s true identity according to authors from the National Geographic magazine and The Journal of Law and Religion in opposition to other ideas of what the Chupacabra might be. Lastly, I will present the reason why stories of the Chupacabra have remained in Latin storytelling tradition for so long, even after being debunked by scientific research. The story of the Chupacabra dates back a few years to the original sighting in Canovanas, Puerto Rico in 1994 (Lopez, 1996).

The original victim of the alleged Chupacabra was a goat, which gives the derivation of its name: the Spanish-derived name, “Chupa-cabra”, translates into English as “the goat-sucker”. Supposedly, an unidentified creature heavily mutilated the goat that was first attacked and no blood remained inside of its body. After this first incident, more similar stories arose and the rumors about the attack quickly spread and more details were added as the story grew. Apparently, Chupacabras only struck at night when all the animals were in their pens and cages and the owners asleep.

It was inferred that the reason for nocturnal attacks was in order to avoid encounters with those that could fight back, humans. The stories grew away from Puerto Rico and expanded to other countries, with their own twist and interpretation of the story. The Chupacabra stories expanded all over the regions of Latin America from Mexico to Puerto Rico to Argentina, all with similar details and descriptions. According to Robert A. Heinsohn’s (2006) book Chupacabra, the Chupacabra could travel at astonishing speed and could move from place to place at the blink of an eye.

Storytellers vividly described the Chupacabra as some kind of part human, part wolf, part vampire hybrid. This was because many of the qualities of the Chupacabra were similar to those of humans, vampires, and canines. In turn, meaning that there action were more despicable than their images. Chupacabras typically had thick, gray skin all over their bodies, and stood on both of its hind legs. Some people said that it had wing-like features, which is what helped them move at great speed and distance.

They had big dark eyes that covered most of their heads and had sharp, vampire-like teeth to spot and eat their prey (Heinsohn, p. 2-14). Chupacabras obviously seemed like a monster that no one would dare mess with. No one knows where these creatures come from, but assumptions of where the Chupacabra comes from remain numerous. The most common story of the origin of the Chupacabra concludes that presumably it does not originate from our planet, but is rather an extraterrestrial life form (Heinsohn, p. 20-28). With increasing stories of aliens all over the world, people did not know what to expect to see, so they related the unknown to aliens.

At the time, alien abductees described the abductors with features similar to that of the Chupacabra, such as gray skin and eyes that covered most of their heads. At this time stories of aliens appeared all around the globe and were described as humanoid with gray leathery skin. These aliens classified under the alien category of “grays,” the most commonly described extraterrestrials (p. 30). Because of the similarities between the descriptions of aliens and the Chupacabra, many people assumed that they had to be related in some way or another.

Another assumption of the origin of the Chupacabra comes from paranoia of the government. Robert Heinsohn emphasizes that people who distrust the government assume that the Chupacabra resulted from a government experiment gone wrong (p. 52-61). Heinsohn proclaims that skeptics of the government show an increase in doubts that result in their disbelief in the government’s allegations. He implements this by showing how many New Yorkers and other Americans responded negatively towards the government after the Twin Tower incident in 2001 (Heinsohn, p. 3). During this time people were vulnerable to believe anything they heard of the situation. Researchers on the attack looked deep into the details of the attack and some debated that the attack might have been an inside job. Immediately, people were outraged and had to question all the government’s actions. Heinsohn is correct at interpreting skeptics’ reactions to be such against their governments, because the government makes it very difficult to interpret the information as otherwise.

He suggests that for the most part these people believe that the government attempted to breed some kind of hybrid canine that failed, resulting in its escape into the wild. Believing that the government created the Chupacabra is not the most impractical idea of its origin though. The most unrealistic and least common story of the Chupacabra comes from people who read nonfiction. Heinsohn suitably establishes that readers of fictional fantasies believe that the Chupacabras relate to or counterpart blood-sucking vampires (p. 92).

In his experience, many of the experiencers with fictional writing backgrounds are the ones who habitually describe the Chupacabra as a vampire. According to Heinson, stories state that the vampire is an evil spirit who goes around sucking out the blood from helpless individuals. This comparison comes from the idea that goats and other domestic animals are supposedly found without blood, similar to how vampires suck blood out of humans in order to stay alive. Vampires need blood in order to keep their mortal bodies alive because they are technically dead and cannot create blood themselves.

This would then mean that the Chupacabra, like a vampire, results as an undead creature. But Heinsohn invalidates this theory as an appropriate argument due to the illogical explanation of the Chupacabra being undead. In David Robson’s (2011) article “Encounters with Vampires,” he asserts that the vampires he has supposedly encountered have very similar descriptions and features as the Chupacabra. He also strengthens the idea that it is quite possible for vampires and Chupacabras to have emerged from a single species, or maybe even emerged from outer space.

Robson also suggest that he may be misinterpreting data because it is not scientifically possible for an earthly creature to live solely off of blood. Many times the theory of vampirism is combined with the theory of the Chupacabra being of unearthly origin, because there is no evidence to show that a creature from earth can live off the blood of other living creatures. As time passed, science and research gave greater insight into the mythological creature. Chupacabra witnesses began to think logically and make hypotheses about the Chupacabra using facts.

Yet despite the facts being brought out, many people still hold their less scientific assumptions about the Chupacabra. Others, particularly in Latino cultures, have become so accustomed to telling the story for so long that it has become a habit, a tradition that has been imbedded into the culture. In Michael Sanchez’s experience, his family tells the Chupacabra story as a scary bonfire story that cannot be distinguished by children as being true or false. He expresses that because the Chupacabra only comes out at night, parents use the Chupacabra to keep children indoors at night.

Sanchez, being from a Latin American family, suggests that if a child is relentless to come indoors at night, parents intimidate the children by telling them that if they do not come inside the Chupacabra will come and take them away. Filled with fear the children would immediately rush into the safety of their homes and remove a preoccupation from parents. Sanchez accordingly implies that stories of the Chupacabra remain in storytelling in order to aid parents in keeping track of where their children are located.

In Mike Davis’s (1997) article “Monsters and Messiahs,” he determines that whether the story of the Chupacabra remains in story telling and history or not, “it has resulted in the intellectual advancement of the human race,” by forcing them to research a phenomenon before making any illogical assumptions (p. 34-35). Technology has improved throughout the years following the breakout of the Chupacabra, resulting in easier access to information and research conducted by the scientific community.

By interpreting Chupacabra witness’s reactions, Davis understands that learning the truth about the Chupacabra shows how human beings influence their understandings by using much of their emotions, resulting in biased and skewed interpretations of reality. Some people learn from their mistakes, so then they learn to avoid making speculations without being biased and in effect properly educating themselves. Learning about being wrong advances the methods and ways people think and interpret data. 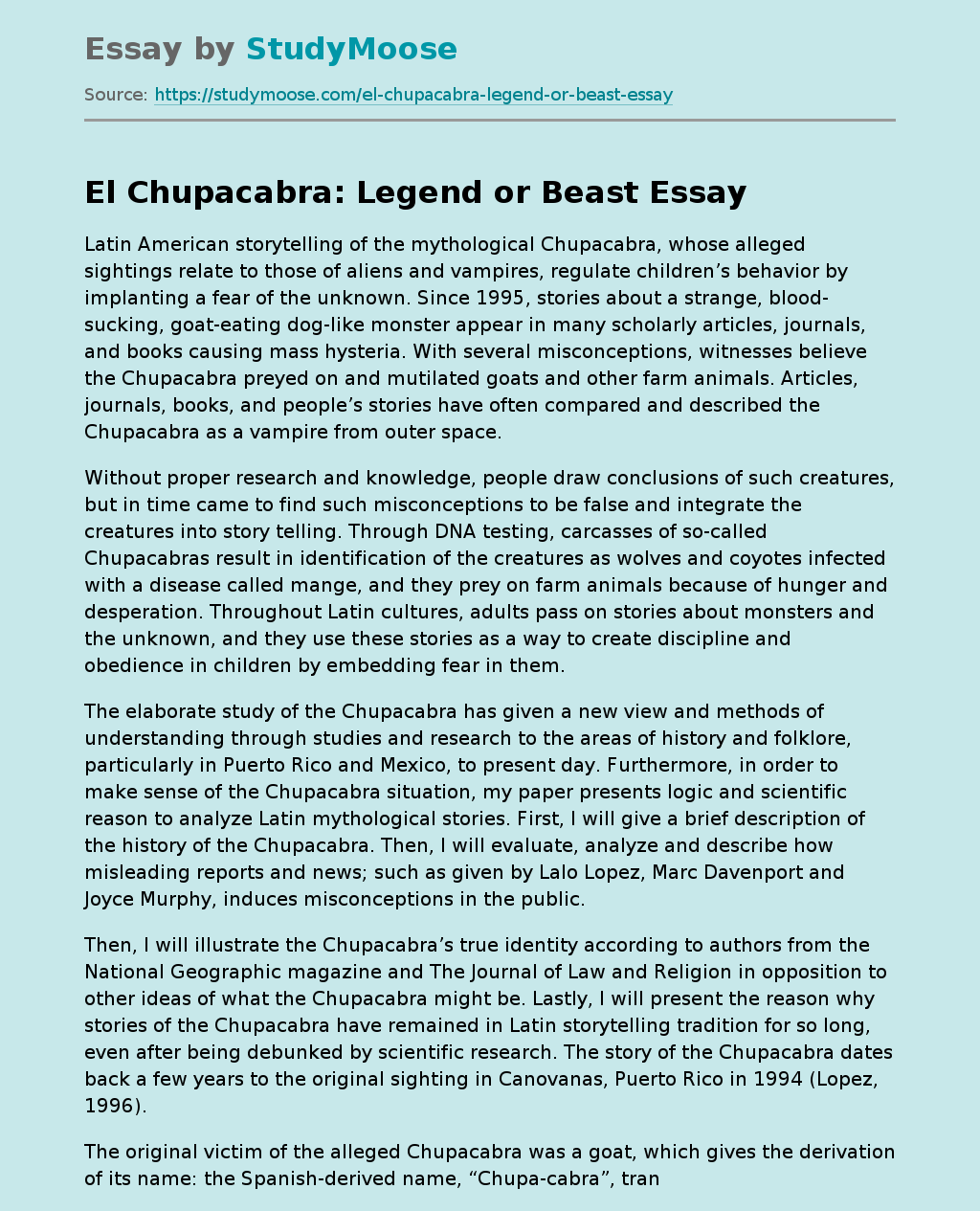