eHarmony and other paid dating sites

The biggest threat to eHarmony and other paid dating sites was the free dating sites that were the newest entrants into the market. These sites did not have major restrictions to joining and did not necessarily do the match-making for the members. According to Piskorski, Halaburda & Smith, very many people subscribed to such sites as witnessed by the rise of “Plenty of Fish” in 2007 to become the most frequently visited in Canada and the U.

Don't use plagiarized sources. Get your custom essay on
“ eHarmony and other paid dating sites ”
Get custom paper
NEW! smart matching with writer

K, and fourth in the United States(8).

A study by eHarmony showed that couples who met through eHarmony had happier and more successful relationships than those from other online sites (Piskorski, Halaburda & Smith 6). Accordingly, eHarmony charged twice as much prescription fees as other sites but the company revenue continued growing mostly because the customers were satisfied with the product.

eHarmony’s biggest competitor, Match, had also come up with “Chemistry” a new dating site that had the same match-making idea as eHarmony.

However, Match priced its site at 10% less than what eHarmony was charging. However, despite such competition eHarmony was able to distinguish itself by offering more personalized services that allowed for guided communication between would-be partners by use of personality profiles.

The threat posed by substitute products

Apart from Match, according to Piskorski, Halaburda, & Smith other free sites were coming up all over the internet that made it difficult for paid online sites to retain members (1). People were opting for the more personalized yet free online sites instead of having to pay for similar services on paid sites.

However, these users were more of the casual daters; but those seeking serious relationships continued their subscription to eHarmony.

At eHarmony, the customer gets the chance to communicate with a potential partner after having paid for the communication process. The value provided in eHarmony’s business model concerns giving the paying member guided communication with a potential partner. The company ensures that they consider the preferences of the applicants before starting on the match-making process. According to Piskorski, Halaburda & Smith, the company considers the similarities among applicants in order to start the match-making process (6).

In line with this, the company considers a person’s characteristics, interests, and values and looks for a person whose profile is similar. In fact, the company has gone against the traditional idea that opposites attract and opted for the similar traits while match-making. This assures the customer of the value of the investment they make when subscribing for the site as it offers more personalized and workable options than other sites.

eHarmony’s success is based on the business level strategy employed by the company through which, the company is able to identify its customer base, the services needed, and how to satisfy those needs. When eHarmony started in 2001, the customer base was, mainly composed of people seeking serious relationships especially among faith-based communities. Piskorski, Halaburda & Smith write that eHarmony received over 100,000 subscriptions within the first few weeks after launching (4). However, with time, the company was able to expand its customer base to cover a broader customer base especially as a result of massive advertising. By 2004, the company had managed 3 million subscriptions. eHarmony understood that the customers were in search of potential lifetime partners, thus making the company’s match-making process very specific.

The customer’s personal interests were analyzed through a matching algorithm that often guarantees personal satisfaction. According to Piskorski, Halaburda & Smith, results from a study conducted in 2005 showed that on average in the United States, members belonging to the eHarmony site married everyday, and by 2007on average, 236 eHarmony members were getting married daily (8). The company continued to strategize in a bid to invent products that would attract more members and retain the current ones. For instance, according to Piskorski, Halaburda & Smith, the company was considering easing some of the restrictions to joining the site, allowing more casual daters, and expanding geographically (13-14).In addition, the company looks to focus more customers’ life events such as weddings, births, parenting, and care for the elderly.

eHarmony and other paid dating sites. (2016, May 01). Retrieved from http://studymoose.com/eharmony-and-other-paid-dating-sites-essay 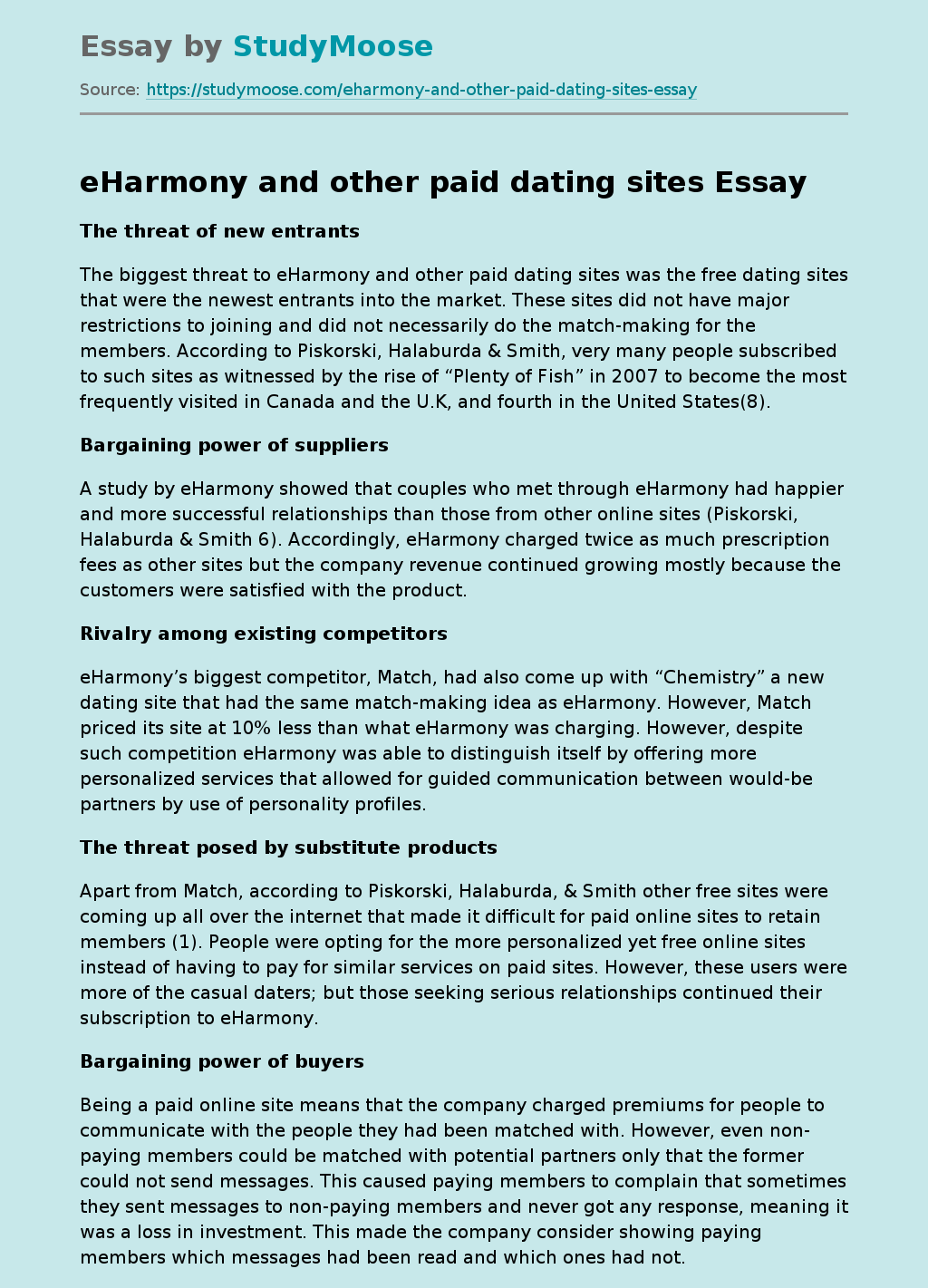