Option C is the most likely egoist option. This is evidenced by the words “this just means less people competing with me for scarce opportunities and resources” (Eccles, N. 2013), which indicates that the person in the scenario is concerned with his/her own wellbeing first and foremost, and that is what egoism is all about – “a tradition which is based on ‘self-interest’ rather than some idea of the greater good” (Eccles, N.

Tell us what you think of this option.

This option is clearly an example of egoism, since self-interest is central to what the person is saying. The principle of self-interest, or selfishness, is also in clear contrast with the meaning of altruism: ” the principle or practice of unselfish concern for the welfare of others” (Collins Dictionary. [sa]). An altruistic person will therefore take care of others before themselves.

Considering the world we live in, one can not realistically believe that ethical egoism, in other words the idea that “being selfish is not just sensible, but morally good” (Eccles, N. 2013), is the right thing. Imagine how much worse the reality of 20,000 children dying would be if everyone in the world only takes care of themselves. No charity organisations would exist, and no-one would lend a helping hand to those in need. The 20,000 would grow exponentially, leaving the world a much worse place (although utilitarians may disagree and say that it is a good thing!), devoid of hope and optimism.

I can therefore say that I disagree with the argument of Ayn Rand when she says that there is virtue in being selfish. Her argument about altruism being evil (Eccles, N. 2013) is quite irrational, since doing something good to help others, and by doing so making the world a better place, is by no means evil.

I think that we are all driven by a certain degree of egoism, although not entirely. In order to be able to take care of others, one also has to take care of oneself (this could very broadly be connected with psychological egoism, because we are programmed to try to survive) – but not only of oneself. A careful balance between altruism and mild egoism must therefore be found, taking care not to let our egoistic traits dominate our altruistic ones, because “concern for the welfare of others” (Collins Dictionary) makes us better as human beings, and also makes the world we live in a bit more bearable than when everyone is standing alone.

Reflect on your Assignment 2 answer

In Assignment 2, I said that I believe Whitey Basson deserved the earnings he received because it followed years of hard work, but that I would have liked to see him contribute to charity or make an effort toward that end. I also went on to say that if I were to earn as much as he did, I would ” like to put it to use in educating the underprivileged so that they, in turn, have the means to earn a good living for themselves and their families”. I believe my opinion of Whitey Basson deserving the earnings is a little bit uncomfortable with my opinions in this assignment and that in assignment 3 (in which I said that “no child deserves to suffer and die if it could easily have been prevented”), since I have no evidence of Basson contributing to charity to create a better world for all.

My comment that I would like to see Basson contribute to enable the underprivileged to create a better life for themselves and that this is what I would do if I were to earn that much is, however, compatible with my opinions of both assignments 3 and 4, since I expressed in both that we should help others as much as we can, and not let children die needlessly.

Egoist Options. (2016, May 13). Retrieved from https://studymoose.com/egoist-options-essay 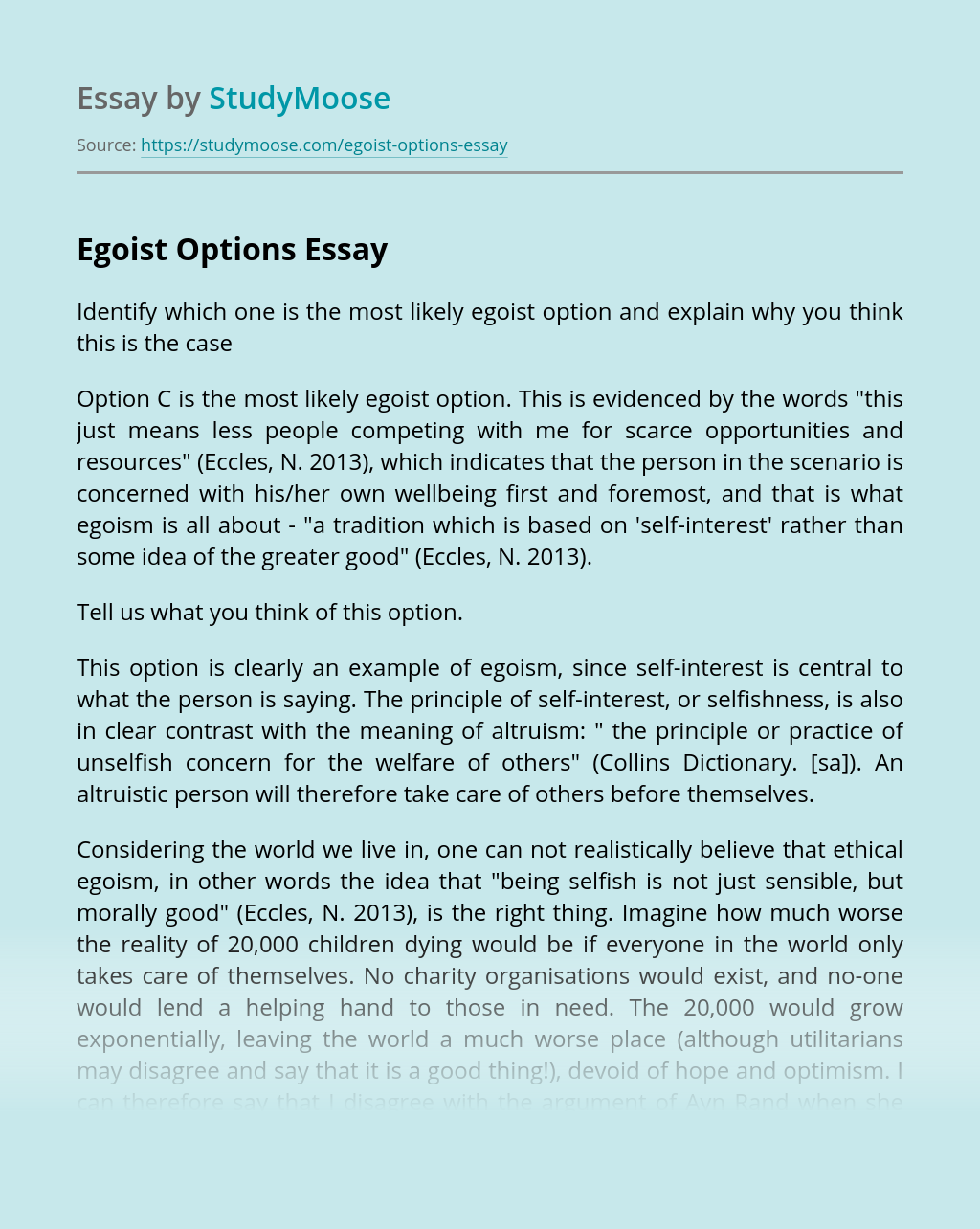