The U.S. Census Bureau reported that about 30 percent of American families are headed by only one parent. Single parent households numbered over 12 million in the year of 2000. According to this, single parent families can no longer be viewed as nontraditional families. These families are all around us today. So, interest has grown as to the effect of these households on Children’s well-being. The most important effect of single parent household on children is in academic achievement.

Don't use plagiarized sources.
Get Your Custom Essay on Effects on Children in Single Parent Household Just from $13,9/Page

According to the research named Single parenting and children’s academic achievement from Kunz (2010), most single parent households are run by mothers. Therefore, children who lack fathers’ attention can’t have a happy learning environment. They usually perform poorly in school because the lack of guidance on their homework. From this research, we can conclude that for every 100 dollars of child support mothers receive, their children’s standardized test scores increase by 1/8 to 7/10 of a point.

In addition, children with single mothers who have contact and emotional support from their fathers tend to do better in school than children who have no contact with their fathers.

Further, they are more likely to commit a crime because they want to attract people’s attention. This can not only ruin their lives but also break their parents’ hearts. Although there are so many negative effects on children in single parent households, it can have positive effects on them as well. According to a study at Cornell University, positive single parenting did not show any negative impact on the social and educational development of the 12 and 13 years old participating in the study. In addition, children in single parent families may exhibit strong responsibility skills, as they are often called upon to help out more with family chores and tasks. Therefore, if children in single parent households are taught and educated by the single parent in an appropriate way, they can become people who are more strong and independent than the normal children in normal families. Because they lack love, they learn how to survive in this complex society and live a happy life and become stronger and stronger.

To help the children in single parent households, our whole society is supposed to pay more attention on them. If we can give more care and patience to them, they will become strong but not evil. They are the most innocent part of their families, and they are supposed to be treated as the normal children in normal families. Please give your love and care to them. 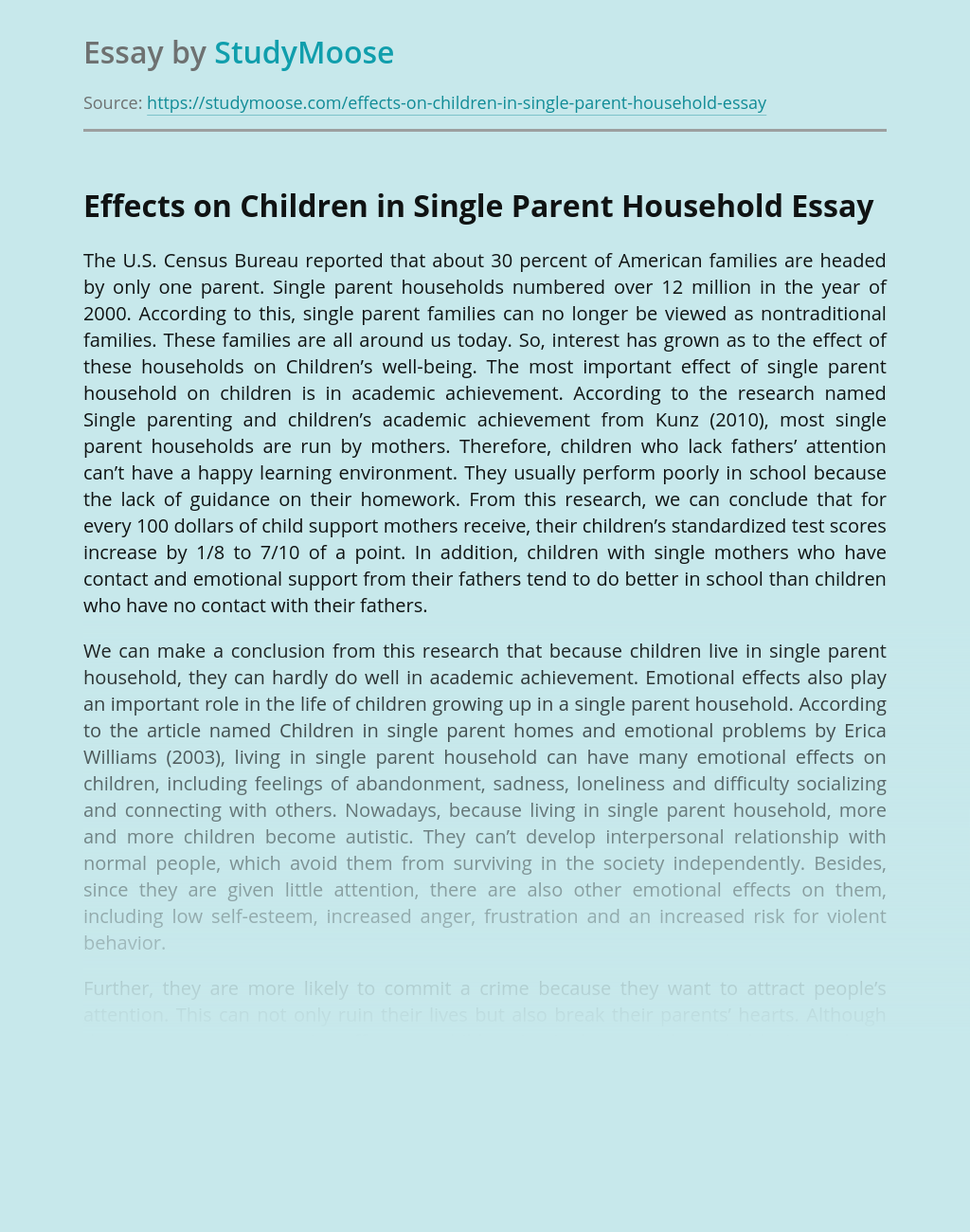 Rate this post Introduction: Early Youth is an important stage of children’s life. By connecting with individuals around (each other and the adults), children explore and make sense of the world around them. An effective early childhood curriculum must fulfill children’s requirement to provide children abundant experience at the most crucial developmental phase of their...

Rate this post Childe Harold’s Pilgrimage is a travelogue written by a melancholic, passionate and expressive tourist. Byron wrote this poem on his travels trough Spain, Portugal, Albania, Greece, Belgium, Switzerland, the Alps and Italy. The hero of the poem, Childe (an ancient term for a young noble awaiting knighthood) Harold is a young extremely...

Rate this post Introduction The modern day definition of playing for many children these days are stuck in front of the laptop, television, game console or tablet devices. Game consoles more generally refer to video games that required connecting to the television. Examples of game consoles are Microsoft Xbox, Sony PlayStation and Nintendo Wii. While...

Rate this post Intro My focus with this project will be on education as a whole and to show a knowledge of key legislation in regard of curricula and efforts within the expanding kids’s education work-force. I will do this through relevant reading and understanding gained from individual experience, showing a comprehension of the holistic...

Rate this post In this TMA I have met the ethical requirements of the E105. I complied with the ethical guidance published by BERA, 2011 under the United Nations Convention on the Rights of the Child (UNCRC) by informing parents and giving them the option to withdraw their child from participating; as some children were...