With the war overseas, American companies stopped producing the goods of American life and created goods needed to fight a war.

Turn in your highest-quality paper
Get a qualified writer to help you with
“ Effects of world war 2 on american society ”
Get high-quality paper
NEW! AI matching with writers

The increase in production helped to rebuild the nation after the Great Depression. This economy also decreased unemployment, achieving what the programs of the New Deal had intended to do. With many men off to war, women were brought into the workplace and a new trend began in the American industrial society. Women took up jobs in industry that had once been reserved for men. They worked in the factories as riveters, welders, and heavy machine operators.

With a war overseas Americans were forced to look at their own prejudices on the home front. While Hitler and Nazism supported the elimination of the non-Arian German, African Americans and other cultures of the United States fought to gain the respect of the United States. While whites and American males fought in the wars of the past numerous other cultures saw World War 2 as a war to show their worth.

Cultures such as African Americans, Native Americans, and Chinese Americans fought side by side to fight for America.

Another effect of World War 2 was that of price controls and the shortage of supplies. Price controls were put in place to control a lower price on items in short supply. One item that was in short supply was that of gas. This was due to a combination of the need for its use overseas and the sinking of oil tankers in the Atlantic. Other items such as rubber were also in short supply, thus Americans were forced to do less driving and traveling during the time of the war. In order to provide food for soldiers overseas as well as for the rest of the American people, the government began a campaign to supply fruits and vegetables to all. This campaign became known as Victory Gardens, and contributed 40% of the vegetables grown in the country during the war.

The United States changed for the better with World War II. First the manufacturing of goods for American allies and then American forces helped to rebuild the national economy after the Great Depression. Secondly the United State’s policy of isolation was abandoned with the bombing of Pearl Harbor and Americans realized that Europe was only a pond away. Also after a buildup of the military the United States become a leading military power. With the war fought over in Europe, the United States was also spared with the physical destruction faced by Europe; in this the US economy was able to dominate the world. This ultimately led to the status that the United States has today, as being a worldly power. 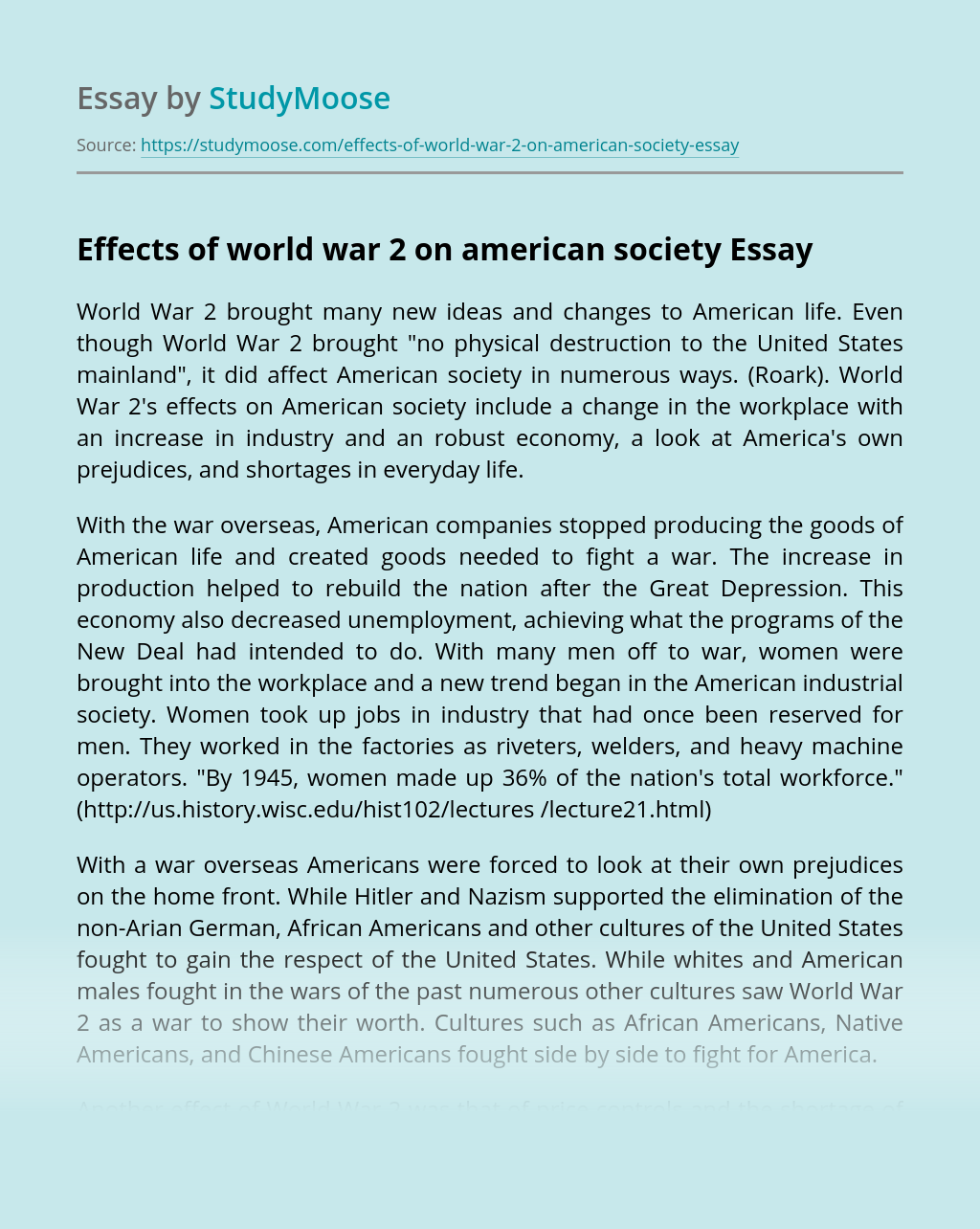 Turn in your highest-quality paper
Get a qualified writer to help you with
“ Effects of world war 2 on american society ”
Get high-quality paper
Helping students since 2015
Stay Safe, Stay Original