Frederick Douglass and Harriet Jacobson both write their compelling stories on what life was like as slaves during 19th century America. Both narratives define the harsh life of slavery and the unforgiving effects that occurred during their time as slaves. In the same way, both stories reveal the theme of the evils of slavery but also given their different gender roles, their experiences are completely different from one another. While both Frederick Douglass and Harriet Jacobson’s Narratives undergo the corrupt power of slavery in 19th century America and were able to escape, the role of gender in society largely acts as a variance within these two stories.

Don't use plagiarized sources. Get your custom essay on
“ Effects of Slavery ”
Get custom paper
NEW! smart matching with writer

Both Frederick and Jacobs were born into slavery; Frederick’s father most likely being his master, and Jacobs being lucky enough to have both of her parents. Though Jacobs had a safe and guarded childhood, after her parents died she began to see the cruelness of slavery. Frederick learns the evils of slavery earlier on in his life when he witnesses his aunt being horribly beaten by his slave owner.

(Notes, 2013) Both characters express their deep hatred for slavery through their narrative themes. In Jacob’s narrative she argues that slavery destroys the standards of slave holders, practically without exception. Jacob describes her feeling when she realizes Dr. Flint has total control over her, “When he told me that I was made for his use, made to obey his command in everything; that I was nothing but a slave, whose will must and should surrender to his, never before had my puny arm felt half so strong.

” (Jacobs, Life as a Slave Girl, IV) Through this, she feels empowered to rebel against him in acts that later shape her life. Jacobs has a strong hatred to slavery that she shows through her rebelliousness and the chances she takes. Douglass shows his hatred for slavery through his descriptive writing. For instance, he shows his intelligence by simply writing the narrative showing people that he is no animal but an accomplished human being.

The fact that he used his real name in his narrative shows his strength against slavery. Douglass believed he was entitled to be treated like a human being and was enraged that he wasn’t treated as such. The physiological abuse slaves went through was unimaginable. When Douglass was given to Edward Covey he was to be “broken.” Covey took joy in breaking down his slaves until they weren’t “human” anymore. His job was to take all of the “life” and joy out of a slave’s life so all they know is work. Douglass states that his, “ natural elasticity was crushed, [his] intellect languished, the disposition to read departed, the cheerful spark that lingered about [his] eye died; the dark night of slavery closed in upon [him]; and behold a man transformed into a brute!” (Douglass, X) Through this quote, one is able to see that he was broken by slavery, and turned into an animal. Jacobs abuse is similar to Douglass’s experience with physiological when she realizes that Dr. Flint owns her body. She is tormented by him at any time, as he frequently gets her alone. She is stuck in her situation because she can’t tell anyone to make Dr. Flint stop. She points out that slaves are given no reason to develop a strong moral sense, as they are given no ownership of their own body or final control over any of their actions. Both characters go through a time in their life when a master has “broken” them physiologically, makes them believe they are less than human. Both characters describe their childhood in completely different ways. Douglass explains the system that slave owners used to “make a slave.” By cutting off ties with ones parents, especially maternal caring, they are unable to grasp the concept of love and kinship, thus making them more as animals then people. Douglass explains that he never, “enjoyed, to any considerable extent, her soothing presence, her tender and watchful care, I received the tidings of [my mother’s] death with much the same emotions I should have probably felt at the death of a stranger.” (Douglass, I) Douglass’s used adjectives like “soothing” to reinvent the childhood he could have had if he would’ve had his mother in his life. Douglass was robbed of his childhood by the wickedness of slavery and his attitude towards that is shown through his descriptive writing. Jacobs had a very different childhood then Douglass. Jacob’s had a somewhat normal childhood for a slave. Jacob’s was fortunate enough to have both of her parents in her life as well as a brother for amount of time. She was not a victim of being separated from her parents like Douglass. She was also privileged enough to be ignorant of what she had been born into. After her mother’s death, she is taken to her mother’s mistress who teaches her sew, read and write. Though both characters are born into slavery, they lead completely different childhoods.

Gender dictates the working rolls Douglass and Jacobs were assigned in their time as slaves. Jacob’s was again fortunate to be doing house work as a young girl, most of her time as a slave she acted as a house maid. By being a women Jacob’s wasn’t easily subjected to working a hard day in the field, though field work was in her future when Mr. Flint vengefully sends Jacobs to his plantation. Though she was to work in the fields, such work was only assigned by Mr. Flints feeling towards her having an affair with Mr. Sands. Douglass being a man was subject to much harsher work than Jacobs. Douglass was exposed to hardened slave masters who were cruel to him, and was given harsh beatings. Douglass is deeply emasculated by the hours of work he spends out in the fields, as well as the harsh beatings given by Covey. Douglass becomes capable of only resting as a result of his beatings and extensive hours of work. Douglass describes one of his many beatings in great detail, “he lashed me till he had worn out hisswitches, cutting me so savagely as to leave the marks visible for a long time after. This whipping was the first of a number just like it, and for similar offences.” (Douglass, X) Slave men were subject to much harsher work than the women, and these two characters are primary examples of such.

Douglass and Jacobs were physically abused, but the context of their abuse was completely different based on their gender. Jacob was subject to Dr. Flint’s frequent sexual harassment. Jacobs was continually taken advantage of sexually during her time under his grasp. Jacob’s narrative is quite focused on the fact that she is a woman when writing about her struggles, “Slavery is terrible for men; but it is far more terrible for women. Superadded to the burden common to all, they have wrongs, and sufferings, and mortifications peculiarly their own.” (Jacobs, XVI) Her abuse physiologically damaged her, and eventually caused her to have an affair
with another man just to escape another’s harassment. Jacobs was never able to truly be a woman of her own, she was constantly pressed by the fact that she was a slave and had no right over her own body. She states in her narrative that her body belonged to Dr. Flint, which was harmful to her. The fact Dr. Flint’s harassment led Jacobs to having an affair with another white man who she was not in love with, and eventually led into her hiding delaying her from mothering her children obstructed her chance for her to be a real woman. Douglass’s abuse was completely different but had the same effect on him; he wasn’t able to be a true man. Throughout Douglass’s narrative and mostly in his time under the control of Covey, he describes how his endurance to become a real man faded. Covey truly broke Douglass and continually states that he was everywhere, “under every tree, behind every stump, in every bush, and at every window, on the plantation.” (Douglass, X) Slavery took every ounce of his will to live; he had no interest in reading, writing, or even escaping to become a free man. The effect slavery left on him shows that as a slave, Douglass was not able to be a real man. While both Frederick Douglass and Harriet Jacobson’s Narratives undergo the corrupt power of slavery in 19th century America and were able to escape, the role of gender in society largely acts as a variance within these two stories. Both characters show that as a slave, they weren’t able to act as a real man or woman. The physical and mental abuse, their childhoods and every aspect of their lives as slaves, hindered them from having a real life for themselves. Though there were similarities in their narratives, their gender truly controlled the course of their lives. 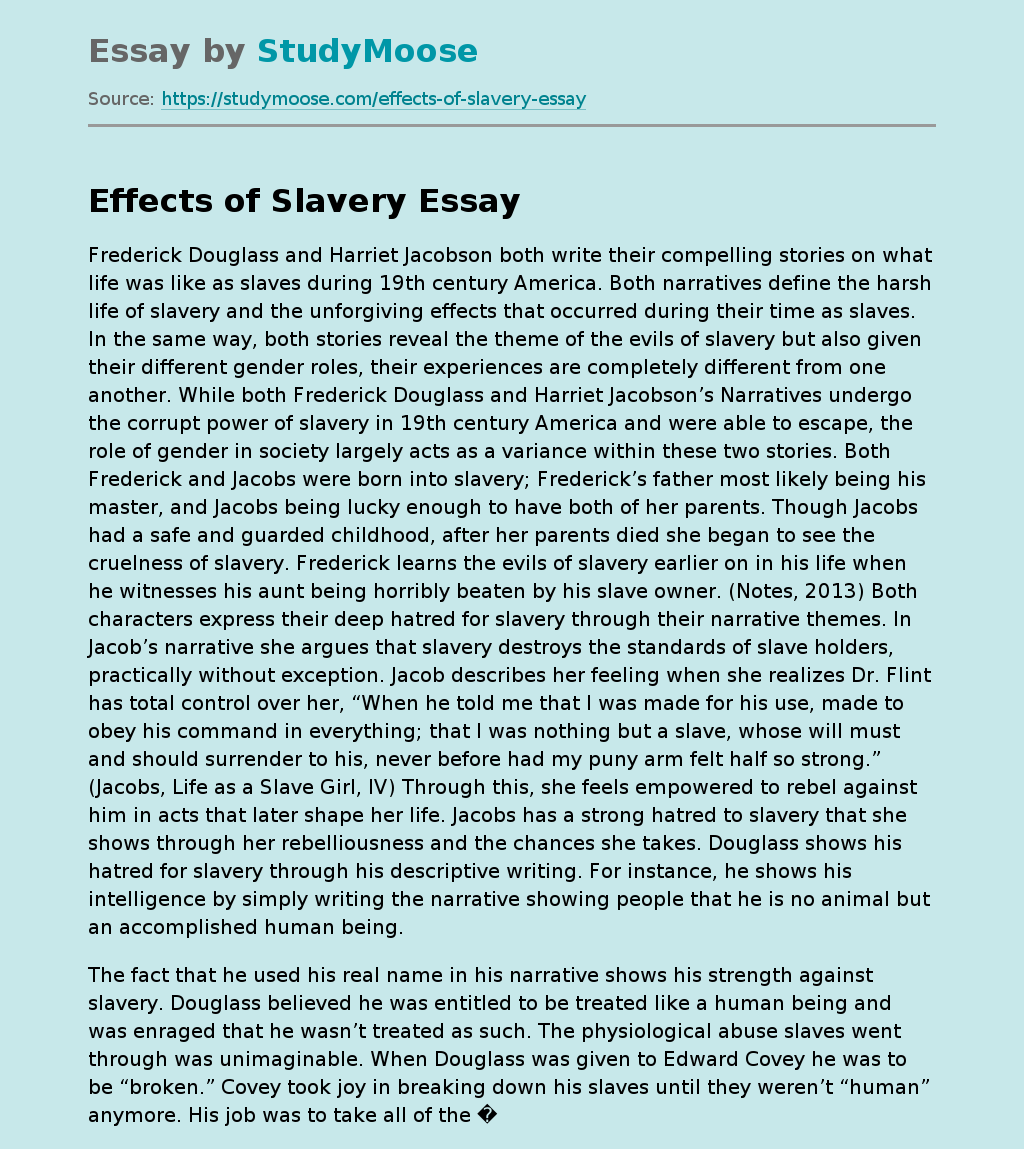