Effects of slang language in the english language

2.5 billion Text messages are sent per day Majority of people have been affected by “slang” language. This report describes and evaluates the reference of ‘slang’ being incorporated into the English language.

Don't use plagiarized sources. Get your custom essay on
“ Effects of slang language in the english language ”
Get custom paper
NEW! smart matching with writer

Qualitative research in the form of a questionnaire has been used to conduct the research and gather the necessary information needed to compile this research report.

With the research conducted, it was found that students are very keen and do not mind ‘slang’ being incorporated into the school syllabus and into the English language. With careful evaluation, it has been identified that ‘slang’ is used mostly by those who are too lazy to type and people who find it hard to remember the spelling of certain words. They also find it easier and quicker to write and type. further research can be conducted to find out how the Department of Education and English professionals think about ‘slang’ being part of the English language and ‘slang’ being used in schools as an acceptable language.

The effects of ‘slang’ language on the English vocabulary? “Since texting became popular in the 1990’s, the underlying question is whether it is the texting language is advancing or ruining the English language” (Huang, 2008: para 8). Research on this topic has been conducted, on both the positives and negatives. 2.5 billion Text messages are sent per day Majority of people have been affected by “slang” language. “This new form of communication has become so prominent that some educators worry that it may be damaging learner’s literacy skills.” (Paul, 2010: para.

1). Throughout the centuries, the English language has change from various types, like the Shakespearean English, the Elizabethan English; to the English the modern people of today now speak.

“This structure allows people to write and receive messages faster.” (Puaze, 2011: para 1). The impact of the texting language has contributed drastically to the immense change and standards to the English language. The content and structures of a sentence has no grammar and substance and punctuation is just as bad. Many critics of the texting language have noted that an individual’s vocabulary lacks, as they cannot express what they want to say.

The texting language lessons a person’s vocabulary. “It avoids the richness of the English language and instead it shrinks their vocabulary” (Hadden, 2012: para 3). Many learners who use “slang” language very frequently have problems in writing essays because of their limited vocabulary. Many teachers have noted the vast use of the “slang” language in homework activities and essay reports. Even the simplest words are misspelled.

Major themes from findings
Many participants have agreed that ‘slang’ should be incorporated into the English language as it is an everyday use of language. Even though ‘slang’ is not an academic language or a formal language, many in this time of day use the language even the elderly. Slang is mostly used to communicate via texting as it makes it simpler and quicker to say what is needed by using an abbreviated form of the word. Many other students have a problem with slang because they find it hard to remember the spelling of certain words during tests and assignments because of the constant use of the abbreviated words. They believe that slang weakens the English language but find it easier to use on a daily. From the findings of my data collection, majority of the questionnaire participants believe that yes, slang should be incorporated into the English language as it used by many people already.

Analysis and interpretation of findings
Having analysed the data, it has been found that many students are of preference of the ‘slang’ language for it makes means of communication easier and quicker for them. The findings also indicate that keen though learners are keen on the ‘slang’ language being incorporated in the English language, they feel that it weakens the English language and lessens their capacity to think more broadly and remember how to spell certain words during tests and exams. Even though it give the ability to think creatively as they are given the chance to play around and create new words. Even though ‘slang’ has not been incorporated into the English language, it is highly used by many people, especially the youth of today and some of the elderly.

Conclusion
Qualitative research was conducted in order to find the information that was needed to compile this research assignment. The main aim of this research was to unravel what the effects of ‘slang’ is on the English language. With thorough analysis, interpretation and analysis, it has been found that many students and respondents would prefer to have ‘slang’ language incorporated into the English language. Recommendations: with the findings, further
research can be conducted to find out how the Department of Education and English professionals think about ‘slang’ being part of the English language and ‘slang’ being used in schools as an acceptable language.

Appendices
Introduction
Your answers will enable us to receive views about ‘slang’ language on the English language. Your identity will be kept anonymous. The results to this survey will appear in our campus newspaper. Thank you. Questionnaire

1. When texting, do you text in full words or do you cut the words shorts? If so, why? 2. If answered yes above, how has this affected your spelling overall? 3. Do you text in abbreviated words to elder people and do they understand what you are saying? 4. Do they reply in the same way that you text them?

Effects of slang language in the english language. (2016, May 14). Retrieved from https://studymoose.com/effects-of-slang-language-in-the-english-language-essay 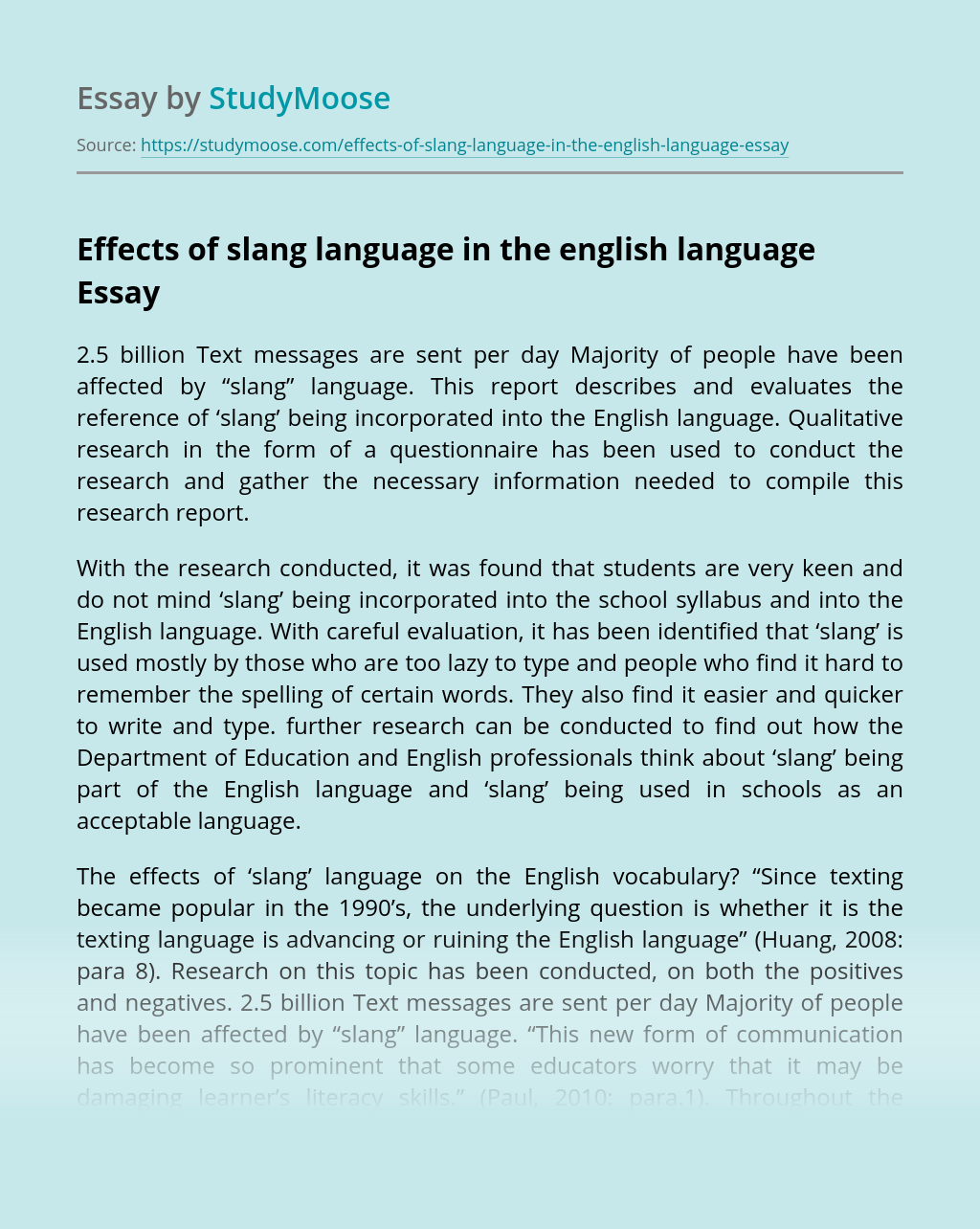