Effects of Rap and Hip-Hop on Youth Culture

Rap/Hip-Hop first became popular among African American and Latinos among youth in the streets of New York during the 1970’s. It was their way of expressing themselves in a friendly manner in the form of speech, fashion, and personal style. Rap/Hip-Hop music was a way for them to get their message out, by telling stories of their lifestyles. However, over the years Rap/Hip-Hop music has become much more popular for its explicit lyrics, reference of drugs, alcohol and sexual explicit videos.

Don't use plagiarized sources. Get your custom essay on
“ Effects of Rap and Hip-Hop on Youth Culture ”
Get custom paper
NEW! smart matching with writer

Over the year’s many researchers have conducted studies on the effects of rap/hip-hop on today’s youth.

The results have been mixed; however there are indications that some forms of Rap/Hip-Hop music could have negative influence on today’s youth. This is due to the fact that youth start to adapt the negative aspects of the gangster rap, by displaying aggressive behaviors and committing crimes of violence. Rap gets a bad rap because some songs contain explicit lyrics, drugs, alcohol and sex.

A study conducted by Ralph J. DiClemente (2003) indicated that teen girls who spend more than 14 hours per week watching the sex and violence depicted in the “reel” life of “gangster” rap music videos are more likely to practice these behaviors in real life.

Tanner (2009) indicated that there is a sense of injustice that rap is often said to involve young people with the police and courts. The study also indicates that youth who listen to rap music have a stronger connection to property crimes than the crimes of violence, and the likelihood of committing those crimes are probably increased by poverty rather than listening to rap/hip-hop music.

In a radio broadcast, Ed. Gordon (2006) mentioned two studies which addressed the effect that rap music has on today’s youth. The first study conducted by The Prevention Research Center of the Pacific instituted for Research and Evaluation in Berkeley, Calif., indicated that rap songs were linked to alcohol addictions, drug use, and violence among youth. Also, a study conducted by The Center on Alcohol Marketing and Youth, Georgetown University, also suggested that youths are exposure to alcohol thought targeted marketing advertising for beer and ale by 66 percent for youth between the age of 12-20 and 81 percent market exposure to distilled spirits.

Nearly two-thirds of rap songs mentioned illicit drugs and nearly half of rap songs mentioned alcohol compared to other types of music. The overexposure to alcohol was connected to cognacs and brandies, both which are linked lyrics in hip-hop and rap music, which rappers glorify and advertise in their songs. Rap music is also used to advertise clothing, sneakers, and cars. Rappers are walking billboards and today’s youth want that same swagger.

Cited in The Brown University Child and Adolescent Behavior Letter (2003), a study was conducted by a group of researchers from Iowa State University and The Texas Department of Human Services who examined over 500 students who had listened to seven violent songs and eight non-violent songs. This study measured student’s aggressive thoughts and their feelings. The results were that violent songs led to more aggressive interpretation of words that also increased the speed in which the students read aggressive vs. non-aggressive works and increased the proportion of word fragments that filled in to make aggressive words. Their study also indicated that the violent songs increased violent thoughts causing youth to act out.

The popularity of Rap/Hip-Hop music and Hip/Hop styles has now reached the Middle East. Iraqis youth in are now starting to imitate hip-hop lifestyles of American soldiers. Youth have now started to adapt hip-hop styles such as, dancing, wearing baggy pants, slangy English, and cutting $ signs into their close cropped hair. Tattoos are now also becoming popular among Iraqis youth. This goes against Islam’s strictures on baring their skin. Not all Iraqis welcome the culture of the American Hip/Hop style, because they feel that Iraqis youth are now beginning to reject authority and other forbidden behaviors, like engaging in forbidden love affairs. Iraqis youth feel that their eyes are now open to the outside world since living under Saddam Hussein’s dictatorship. Iraqis youth are now also starting to use the internet and are watching satellite TV, which allows them better understanding of American cultures, both positive and negative aspects.

In a book written by Michael Dyson, “Reflecting Black: African-American Cultural Criticism. He addressed the question” Is Rap music really as dangerous as many critics argue:” Michael Dyson (1993) states that Rap music is a form of profound musical, cultural, and social creativity. He also stated that Rap music expresses the desire of young black people to reclaim their history. He defenses the negative impact on Rap/ Hip-hop music, which the general public claims that Rap/Hip-Hop expresses and causes violence among youth. It is in his opinion that many rappers have spoken against the violence in Rap/Hip-Hop.

Rappers KRS-One spoke against black on black crimes in a song titled “Stop the Violence” and “Self Destruction”. Rapper KRS-One wanted youths to realize that not all Rap/Hip-Hop music called for violence behavior among youth. Also, rappers such as Will Smith and his partner DJ Jazzy Jeff rapped positive messages to youth about having fun in the summer time, not glorifying drugs, alcohol or sex. Some feel that rap can be negative and positive on today’s youth. Michael Dyson (1993) feels that Rap/Hip-Hop music is getting a bad rap. Could that be true, or is Rap/Hip-Hop really unhealthy for today’s youth?

Over the year’s research, books and studied have been conducted to determine if violent and explicit lyrics in Rap/Hip-Hop music really causes or promotes violence in today’s youth. Since it’s beginning in the 1970’s Rap/Hip-Hop has gone from being fun to listen to now being a explicit rated albums. In today’s time Rap/Hip-Hop glorifies drugs, violence, and sex at an alarming rate. Today’s youth are also embracing the lifestyles’ of rappers in their language and attitudes, with their want of money, cars, drugs and alcohol that rappers talk about in their lyrics causing them to become materialistic teenagers.

What must we do as concerned parents? We must be aware of what our children are watching and listening to. Parents must be involved in what their children are purchasing and they must ask questions to understand what their children are experiencing. In the 1990’s C. Dolores started a crusade to stop the sale of offensive rap music to minors. Mrs. Tucker outspokenness earned her enemies, however she remained relentless with her crusade against what is called gangster rap. Her concerns were that the lyrics were misogynistic and threatened the moral foundation of the African American community.

Rap/Hip-Hop music became popular in the 70’s, since than it has changed the world; youth in every corner of the globe have adopted the culture, the speech and the style. Because Rap/Hip-Hop music has become so popular, many people think that this type of music is making today’s youth more violent, due to the glorification of violent, explicit language, sex, disrespect for authority, and disrespect towards women. Just as parents teach their kids not to do drug, they should also teach their kids that rapper is only for entertainment, it is a business for rappers to sale albums to make money. It is a business for them. It is all about album sales. We should all follow Mrs. Tuckers’ example by taking a stand against anything that could have a negative effective on our youth. Rappers should realize that they are role models to most of our youth and stop thinking about their pockets.

Effects of Rap and Hip-Hop on Youth Culture. (2016, Oct 31). Retrieved from https://studymoose.com/effects-of-rap-and-hip-hop-on-youth-culture-essay 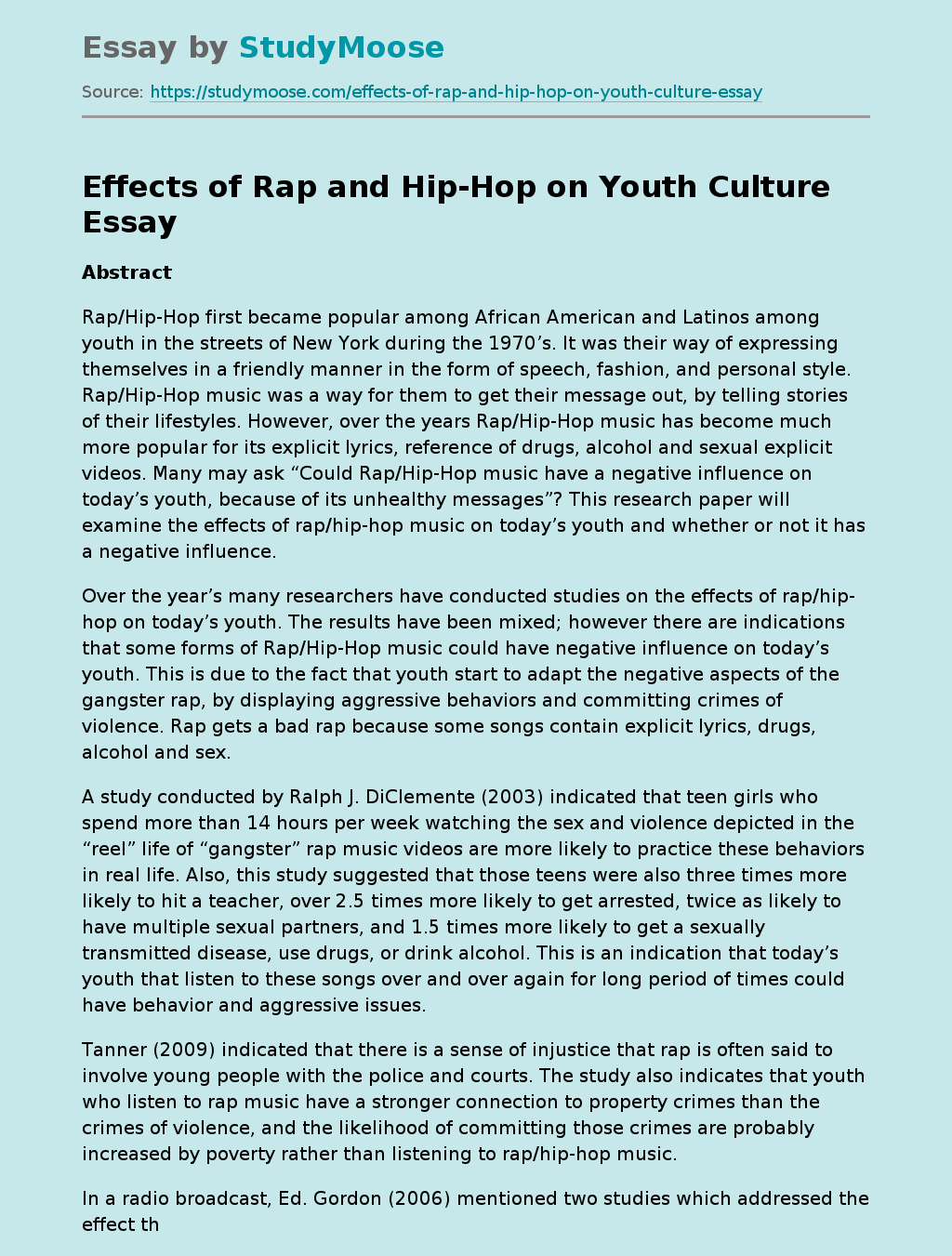