Effects of Music on Teenagers

Every teenager who listens to music interprets the lyrics in a different way. Some people take out a deeper meaning from the lyrics, even going to the point of saying that music “saves their lives”. Music holds a powerful effect on an individual because it can stimulate and provoke multiple responses—physiological, emotional, cognitive, and behavioral. But, every genre of music gives its own message to teenagers. Some may enforce positive actions, while some condone negative actions. Rap has the negative status of objectifying women and promoting gang violence.

Turn in your highest-quality paper
Get a qualified writer to help you with
“ Effects of Music on Teenagers ”
Get high-quality paper
NEW! AI matching with writer

On the other hand, rock has a positive reputation because it helps people cope with their problems and identify with their peers. Everyone, teenagers included, is susceptible to internalizing the messages they hear over and over again. The degree of those messages determines the effect on the teenager.

Structurally, the rock and rap genres has noticeable differences between them. Generally, the sound of rock music rotates around guitars, bass, drums, and the keyboard. There is a large tendency to focus on instruments, especially the guitar, which requires considerable skill to play. For example, the rock band Fall Out Boy consists of four members who each play their own instrument while one member does vocals and plays an instrument. Alternatively, rap’s main focus is free styling and looping words to create a “story” in a flowing rhyme, keeping it in sync with the beat.

In most cases, like the rapper Machine Gun Kelly, the artist preforms by themselves with the assistance with a DJ or MC to play the musical tracks for the songs. Rap displays a larger emphasis on lyrics, while rock likes to have a variety of sounds. In the rock genre, it’s all about expression.

Rock music can speak about all kinds of topics, from love to some not so pleasant. Many rock musicians sing about real issues that teens are going through, which helps teens find motivation. Adolescents sometimes find it difficult to communicate with older people, most of the time because of ideological differences. This often makes teens with problems shy away from seeking help and guidance. Teens find hope and encouragement when they listen to music that talks about problems they are going through. The identification they are experiencing with the rock song lyrics can also help teens to become more tolerant and open-minded. A study published for the 9th International Conference on Music Perception and Cognition reported that mood regulation is one of the most important reasons why people listen to their favorite music (McCammon). Rock music can help mood regulation in teenagers, especially females who are prone to mood swings and depression. For example, the song Eye of the Tiger by Survivor can cause teens to associate with the underdog. The song provides a positive message, while keeping an uplifting tone throughout the whole song.

The music provides depressed teens with a mode to forget their problems and participate in healthy activities, such as dancing. While rock has been given a positive reputation for allowing teenagers to express themselves, some have given it a poor reputation because it can intensify emotions. While those people who are naturally happy and cheerful are less likely to have effects from the negative lyrics, other, less fortunate teens might not be the same. Adolescents who are susceptible to negative, violent, or depressive thoughts are more likely to have those feelings, and act on them, after listening to rock music. At the same time, if a person is not experiencing those negative thoughts, the music can act as a catalyst, causing the teen to have these thoughts and urges. The rap genre is often given a negative reputation for the way it effects teenagers. Critics of the genre say that the music objectifies women and promotes drug use. For example, the song 9 Problems by Jay-Z, repeatedly refers to a woman as a “bitch.” This song allowed women to be categorized under the vulgar name “bitch”, because of the high reception the song received in the media (The Portrayal of Women Within Popular Music). A recent study by WebMD reports that teenagers who listen to rap music are more likely to have babies and engage in risky sexual behavior (Kirchheimer). Apparently, this behavior is because the lyrics in many rap songs promote the idea of women as nothing more than sexual objects.

Correspondingly, it was shown that youth who listened to rap songs were more likely to get involved with drugs. This is because in some songs, the artists refer to drugs that the person has not heard of, which sparks their curiosity to learn and most likely try the new drugs. The rap genre can also give teenagers a false sense of belonging. When they hear about, or see in the videos, expensive possessions, they feel that if they spend their money to buy that stuff, they can be just like the people in the videos. The media then uses this to their advantage to market products to the younger, naïve generations. Even though rap is seen as a vulgar music genre by a large population, it can be positive for teenagers. It makes a person feel good about who they are because even if they may not live a good life, they can relate to the lyrics in a particular song. This is different than the false sense of belonging because instead of the individual trying to fit in, they are finding the place where they fit in, while not changing themselves. Rap lyrics also help youth feel free and powerful. They are free to express what they want to express. Listeners of the music have even gone to the extent of calling the rap genre “a religion for troubled youth” because it provides them with an outlet to express themselves and something to believe in. It is evident that rock and rap are very different genres that expose different messages to teenagers. But, no matter the genre of music, studies have shown that the use of music videos show an increased open-mindedness to deviant behavior among teenagers.

The music videos reinforce what is being heard in the lyrics with the use of visuals. They usually exhibit sexual innuendo, acts of aggression, and gender stereotypes. Research has shown that, after watching videos, men said it was necessary to pursue the women to an inappropriate extent, while women thought it was annoying and/or disturbing. Men scored higher in relations to attitudes for sexual overtones, while women scored higher on the acceptance of interpersonal violence. The results of the study also showed that women who were often subjected to violent music videos were more accepting of violence. Also, men had a greater acceptance of sexual stereotyping and rape myths after watching the videos (The Effects of Violent Music Content On Teens). Over time, people have stereotyped genres of music. Sometimes the music is seen as positive and uplifting. But other times it is seen as negative and downgrading. In the end, the way that music effects teenagers all depends on how the teen acts and interprets the music. Depending on their emotional and mental status, they can have different reactions to the music than someone who has different feelings than them.

Effects of Music on Teenagers. (2016, Feb 20). Retrieved from https://studymoose.com/effects-of-music-on-teenagers-essay 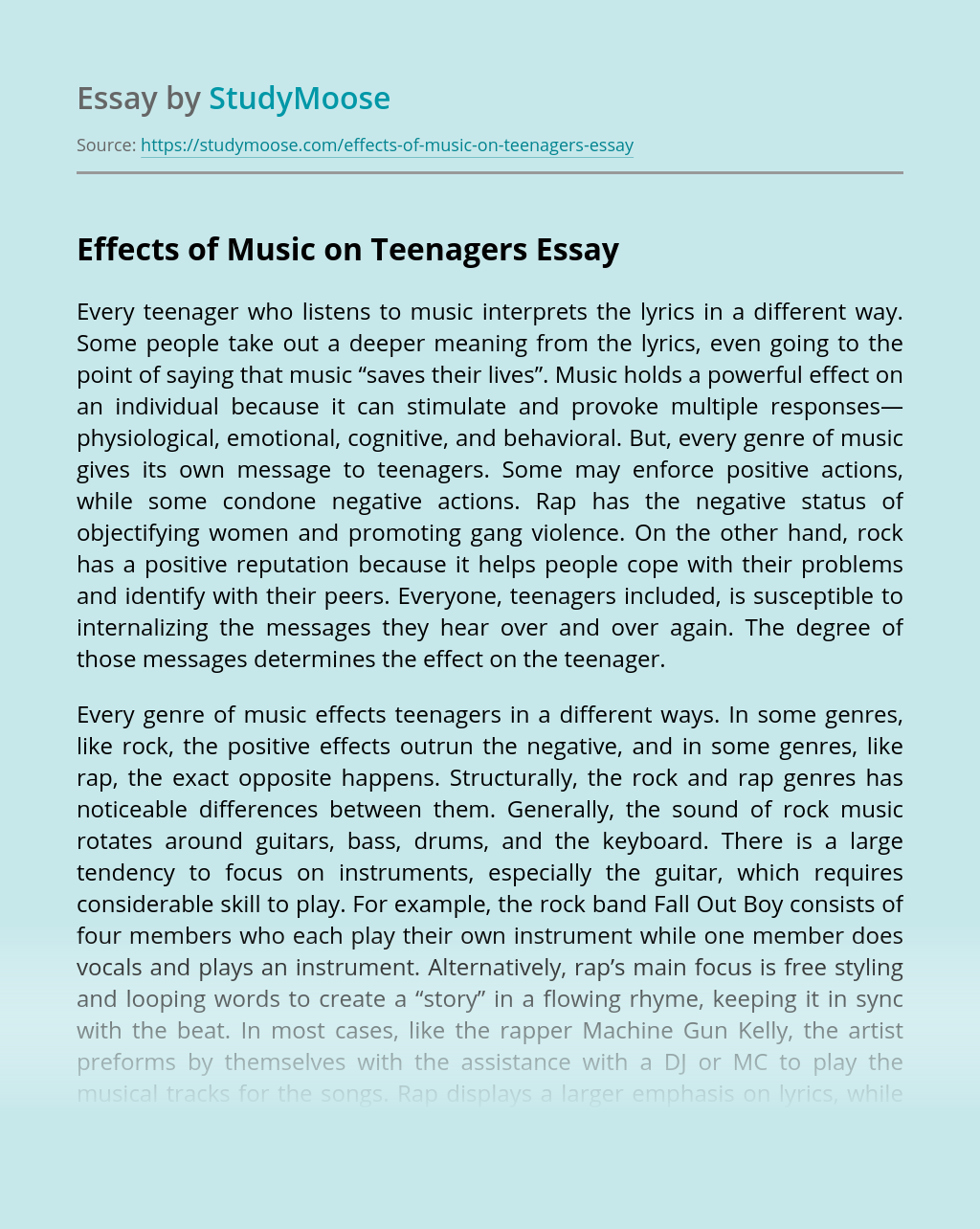 Turn in your highest-quality paper
Get a qualified writer to help you with
“ Effects of Music on Teenagers ”
Get high-quality paper
Helping students since 2015
Stay Safe, Stay Original