Effects Of Music On Children

While people say music has adverse impacts on infants, it has number of positive impacts on the development of children as it reduces the stress and gives inspiration in various aspects of life. The effects of music on children can have a good impact

Children often come across situations where the anxiety surrounds them affecting their performance(Vickers & Williams, 2007). A child may face anxiety while learning about a new language or going through adolescence. However, music can reduce anxiety when children are exposed to it.

Don't use plagiarized sources. Get your custom essay on
“ Effects Of Music On Children ”
Get custom paper
NEW! smart matching with writer

(Shen, Wang & Shen, 2009). It is believed to reduce negative emotions. One study indicated Lai et al. (2008) indicated that students listening to slow music before the examinations tend to attempt the examination with less anxiety in comparison to the students who do not listen to any slow song. This study majorly focused on slow music as a key to reducing to anxiety. He conducted experiments with thirty-eight students and divided them into two different groups.

The students within the music group listened to a slow piece of music then received a test, while the scholars within the silent group took a test without taking note of any music beforehand. The results showed that the anxiety of the experimental group was less than that of the control group, implying that slow music helps reduce anxiety. However, another study (Dosseville, 2012) suggested that serious music can also have a positive effect on children. For this number of undergraduate students were asked to listen to the music before the examination while others were asked not to listen to any song.

The result proved music is really essential in positively affecting the students at a small age. . The experimental group students listened to serious music during a lecture, while the control group listened to the lecture without music. The results indicated that the performance of the experimental group was significantly higher than of the control group, indicating that serious music can have a positive influence on learning performance. One more study de Groot (2006) founded that classical music can also be related to better performance when it comes to learning vocabulary. found that more learning occurred within the music condition (classical music) than within the silent condition when students were learning language vocabulary. Apart from learning vocabulary, reading comprehensions also take a lot of time and sometimes they are confusing too because of the long length. At school, a student also learns to develop reasoning skills and it is also believed that music can develop reasoning skills and help the students to execute them whenever necessary. There are many studies proving that music can help students in developing better learning skills. However, it is important to know if music also help students changing their behaviour and how students can emotionally connect them.

Pop music is also frequently heard by children today, although this tends to be not the children’s own choice. Mothers often put music on, especially the radio, to accompany everyday routines like mealtimes and driving. Older siblings are also influential, in some families, in determining the music choices. Other musical styles such as classical music or folk music are very rare in children’s lives, and would not typically be chosen by them. Taking an example of the relatively rare occasions when children might listen to classical music is at school nurseries. Many play calming classical music after mealtimes to help children wind down to rest. This hasn’t changed much in the last 30 years – many of the children’s parents would have had similar musical experiences – but it is only a small part of children’s musical lives today. In today’s contemporary world many new singers are coming up such as from Punjabi industry a new singer is coming up his name is Shubhdeep singh Sidhu better known as Sidhu Moosewala. He is a young singer and more and more youngsters and children are becoming fan of him. Moreover, not only Punjabis Americans, Canadians and all people across the world are becoming fan of him. Children see him as their inspiration because his lyrics are based on reality of life that’s why he is becoming so much popular. Such singers are influencing children and some children are so much influenced by these singers that want to become like them and they start following them and sometimes this following may be proved as fatal. Because, children stop listening to their parents and behave like the singer.

It can’t be ignored that music can also make children emotionally confused and depressed if they listen to songs containing sexual content. Further, the high pitch sound generating from guitar can also cause anxiety and stress. It can be concluded that the type of music a child listens to is very important in defining what outcome it will have.

However, the study proves that classical music is the best for increasing concentration among students. In this world where most of the people do not prefer to speak about their problems, music can be a way to express the feelings that they often hide. Music should be treated more than just a song. It can bring back old memories and this idea gave rise to music therapy.

Effects Of Music On Children. (2021, Apr 09). Retrieved from https://studymoose.com/effects-of-music-on-children-essay 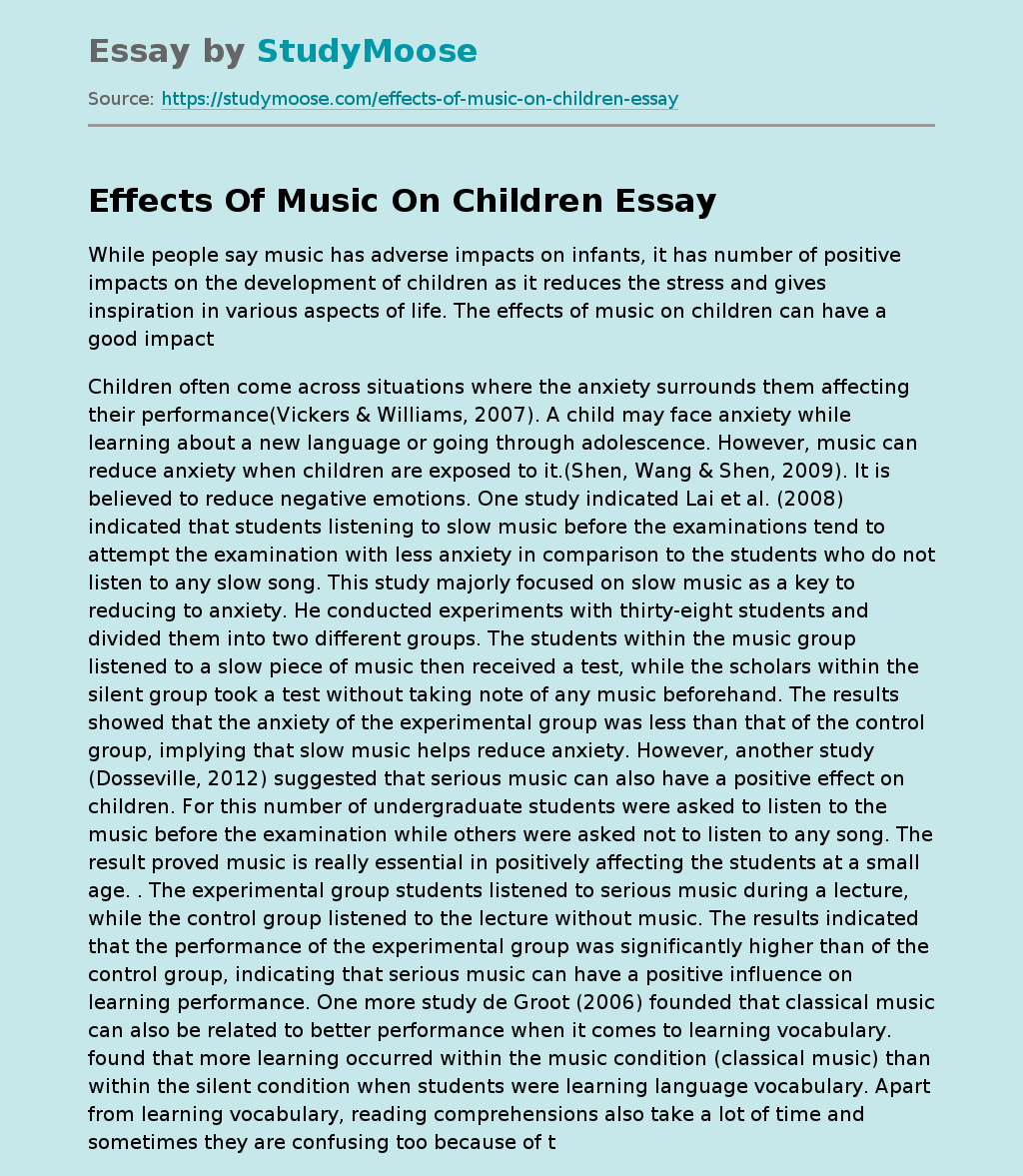