Effects of Inflation: Case of Kenya

Inflation rate is calculated as the rate of change in consumer price indices from one period to another. Periods can be yearly or monthly.

Turn in your highest-quality paper
Get a qualified writer to help you with
“ Effects of Inflation: Case of Kenya ”
Get high-quality paper
NEW! AI matching with writers

The GDP Deflator is another price index that is used to measure inflation. It shows how much of the change in GDP from a base year is reliant on changes in the price level. The GDP deflator is calculated by dividing the nominal GDP by the real GDP.

Creeping or mild inflation – ranges between 3-5% but does not exceed the single digit.

. ANALYSING THE CONSEQUENCES OF INFLATION

On the other hand, unanticipated inflation is that rate of inflation which greatly differs from that which economists and consumers predicted. When such a situation arises, the effects go way beyond inconvenience. The major inconveniences experienced due to anticipated inflation include the shoe leather costs and menu costs. Originally, the shoe leather cost described the lessening of the time it takes shoes to wear out due to the increase of trips made to the bank.

This increase in trips to the bank is a result of the decrease in demand to hold money. Today, the shoe leather cost inconvenience could be the frequent dealings one has to make with their bank which is time consuming. Menu costs are those costs that companies incur when they have to change the price sheets, menus, and catalogues. This takes up both time and money. These effects are not greatly felt in the economy and there is not much cause for concern. However, when there is a fracas in the economy then the effects of unanticipated inflation are being felt by consumers and producers. Some of the major effects that fall under here are; increased cost of living, re-distribution of wealth from lenders to borrowers or vice-versa, money illusion, poverty and unemployment, and last but not least, crime and general unrest. As of September 2014, Kenya’s inflation rate was at 6.60% which is an increase from 6.27% in March 2014. Kenya has therefore experienced an increase in the cost of living.

Increasing inflation rates affect the costs of production, therefore in most cases the cost burden is bared by consumers and not producers. According to Ngenye Kariuki, Kenya has witnessed an increased volume of trade, selling goods and services to neighbouring economies such as Uganda, Tanzania, Rwanda and Burundi, which are all witnessing an economic resurgence. However, “These gains have been cancelled out by the increased living standards which have been caused by inflation,” Kariuki said. He further stated that there has been an increasing trend where Nairobi residents have moved to peri-urban areas like Kitengela, Ngong’, Ongata Rongai, Ruiru, Thika, Kasarani and Kiambu to take advantage of more affordable housing since most lamdlords hiked rent by almost 30%.

Rent for a two-bedroom house in these areas ranges from about 10,000 to 15,000 shillings. In areas near the central business district, rent can be double that for same size house. Another crisis that is facing Kenya, like most Sub-Saharan countries today, is that of poverty and unemployment. Poor living standards worsen poverty and because trade unions are pressing for a rise in wages, employment rates decrease. Most of this can be attributed to the increasing inflation rates. Furthermore, due to the negatives in the economy mentioned above, general unrest is likely to happen. Cases in point are the teachers and health workers’ strikes, members of parliament push for increased salaries, as well as opposition threats to hold a referendum.

Inflation not only has negative impacts on an economy, there are some potential advantages that come with inflation. However, this can only be achieved if inflation is kept at a really minimal level. With a stable minimal inflation rate, governments are able to efficiently estimate their increase in future tax revenues due to fiscal drag effects. For example many indirect taxes are ad valorem in nature, e.g. VAT at 16% – so as prices rise, so does the amount of tax revenue flowing into the Treasury. When governments efficiently estimate their revenues, then they can also efficiently plan for the future. Furthermore, a country can experience an increase in economic activity. Increase in prices would translate to an increase in nominal revenues, this will have a psychological effect on owners of businesses, such that they’ll invest more.

Due to an increase in investment, the new investors are likely to join in on the “fun.” New investment will then lead to employment opportunities, therefore we can say that stable and minimal or moderate inflation increases the rate of employment. Although a disadvantage to lenders, borrowers are at an advantage as inflation cuts the real value of debt. For example home owners with huge mortgages benefit as their real burden of their mortgage decreases. Finally, a country is likely to avoid deflation, because of inflation, an economy can manage to avoid some of the dangers of a deflationary recession.

Effects of Inflation: Case of Kenya. (2016, May 21). Retrieved from http://studymoose.com/effects-of-inflation-case-of-kenya-essay 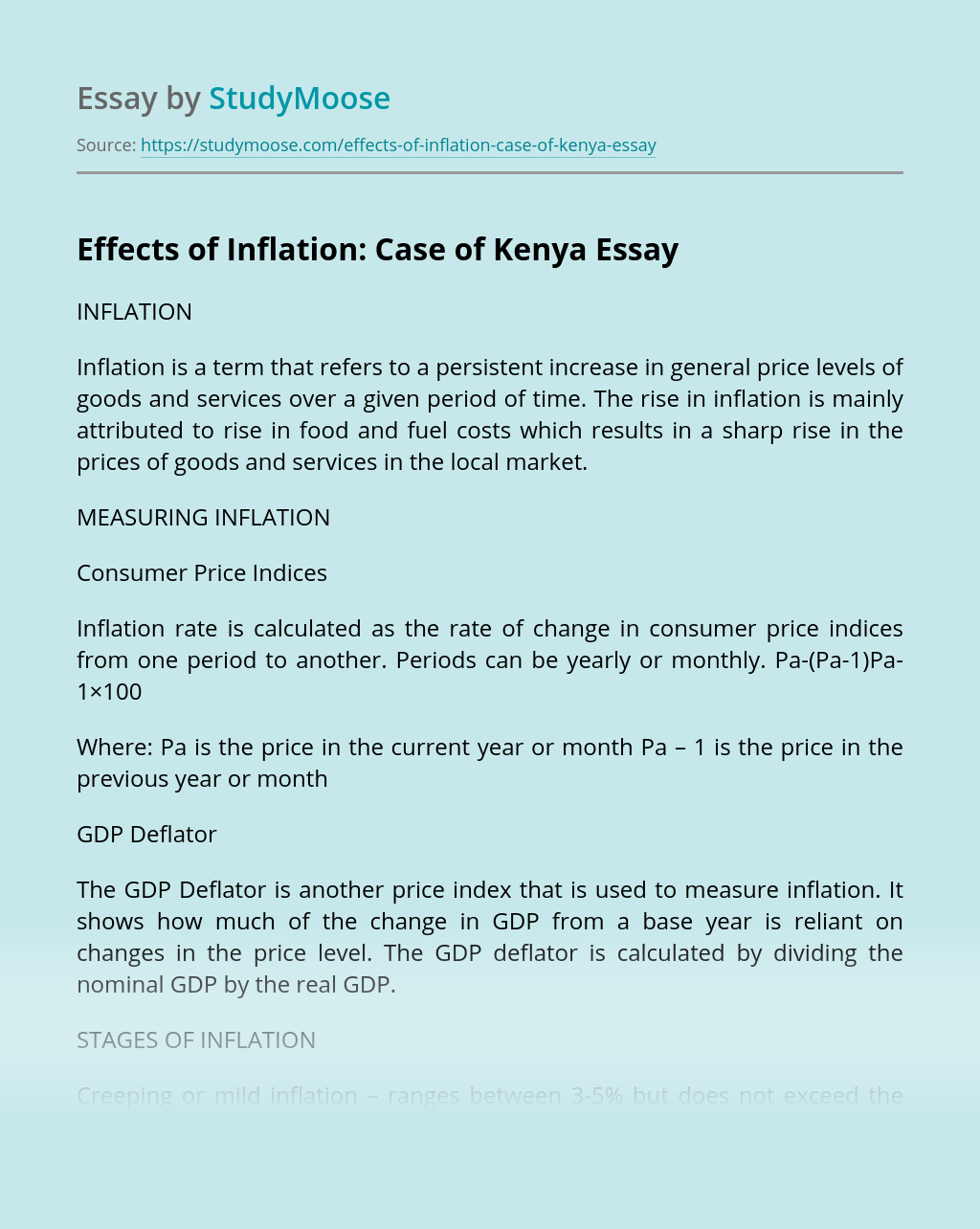 Turn in your highest-quality paper
Get a qualified writer to help you with
“ Effects of Inflation: Case of Kenya ”
Get high-quality paper
Helping students since 2015
Stay Safe, Stay Original