Effects of Industrial Revolution in the World

Don't use plagiarized sources. Get your custom essay on
“ Effects of Industrial Revolution in the World ”
Get custom paper
NEW! smart matching with writer

Tools and the few machines that existed then were made mostly from wood. European products were handmade and the power to operate these tools came from human muscles. The only other available power sources were wind and water, but the use of wind and water-powered machinery was restricted to places where the wind and water power was reliable. Therefore, what’s known as the domestic system was used.

The domestic system is a form of manufacturing in which goods were produced in the homes, either alone or in very small groups.

A few industries used simple factories, single-room buildings or workshops for the manufacture of luxury goods, such as cloth and the production on certain military weapons. “This world of cottage industries and wooden tools was about to be transformed. After the industrial revolution, only traces of this former existence would remain. ” (Corrick, 12) The industrial revolution began in eighteenth-century England. England had money and natural resources, but most importantly, people.

The industrial revolution required both workers and consumers.

England had a population boom in the 1700s due to cured diseases, healthier childbirths, and more and better food. Economic historian Phyllis Deane says, “Without the rising demand for goods…which reflected…the growth of population, there would have been less incentive for British producers to expand…and hence some of the dynamism which powered the industrial revolution would have been lost. ” (Corrick, 18) With the growth of population came the demand for goods and the need for better, easier, and cheaper ways to make these goods. England also had a natural abundance of iron and coal.

Iron became increasingly important because it was a common building material and an essential factor in the development of mechanical production. With England’s jagged coastline, which provided excellent natural harbors, iron became a major export. In addition to people, natural resources, and inventions, money was needed to start the industrial revolution. England had roads, banks, insurance brokers, and all the things needed to open a business. Rich English traders were more than eager to put their wealth to work and invest in English industry.

England had all the factors of production and was the ideal region for the start of the industrial revolution. Another great English industry aside from iron production was the textile industry. “The export of cloth accounted for about a third of all English trade, both at home and abroad. ” (Corrick, 20) In 1733 John Kay invented the flying shuttle. When added to the regular hand loom, a single weaver was able to work the loom. Even though the weaving was still done by hand, it went faster and weavers turned out cloth much more rapidly.

Following the invention of the flying shuttle were James Hargreaves and his spinning jenny, Richard Arkwright and the water frame, Samuel Crompton and Crompton’s mule, and probably most importantly, James Watt and the steam engine. With the ending of Watt’s patents, other inventors were able to make the steam engine more powerful and find more uses for it. By the beginning of the nineteenth century, the industrial revolution played an important role in England. New and larger factories were filling the English landscape.

In the meanwhile, the revolution began to spread: first to Western Europe, then all over the world. Although England was the center of the revolution, France had its fair share of inventors. Nicolas-Louis Robert developed a machine that turned out paper in long rolls, Claude-Louis Berthollet invented chlorine bleaching of linen, and Joseph-Marie Jacquard built a machine that was able to pattern cloth with elaborate designs. Despite these new inventions, most technology was still found in England, so Europeans were drawn to England to study the new machines.

England tried to stop it by passing laws banning the export of technology, but they couldn’t stop the technology transfer from England to the rest of Europe. When Napoleon Bonaparte rose to power in France, it became more difficult for the industrial revolution to come to continue spreading in France. Although Napoleon promoted modernization of the French textile industry, England was soon at war with Napoleon and established a naval blockade of Europe. The blockade cut off French manufacturers from raw materials normally imported from England.

Once Napoleon was defeated at Waterloo, France began modernizing industry with illegally bought British equipment and imported English workers. However, unlike England whose iron production played an important role in industry, “French industry instead concentrated on a ‘lighter’ type of manufacturing, particularly the luxury trade. ” (Corrick, 35) The French specialized in printing designs onto cotton cloth and also got into the manufacturing of furniture. Germany also had a hard time industrializing.

Germany was not a unified country and the independent states were separated by religion, currency, and even viewed each other as economic rivals. “They discourage emigration and levied custom duties…not only on goods entering from other states but even on trade between towns and cities within the same state. ” (Corrick, 36) There were many economic barriers between the German territories. One German state, Prussia, played a major role in bringing industry to Germany. Prussia joined with a number of states to form the Zollverein. They didn’t charge customs and allowed goods to go freely though their territories.

The other states were at an economic disadvantage and joined the Zollverein. Now manufacturers were able to move in and set up factories within the union’s boundaries. Prussia also helped remove serfs and guilds, which were both standing in the way of industry. Now that serfs were no longer bound to their landlord’s farms, Germany was exposed to an important amount of capable industrial workers. In1810, Prussia enacted a law that opened manufacturing to guild and non-guild members, Other German states followed Prussia’s lead and by the 1830s, many obstacles to German industrialization were down.

The industrial revolution didn’t stay in Europe. It eventually spread to the United States and Japan as well. Unlike most countries, Japan was extremely resistant to industry. Japan had a strict policy of isolation from the rest of the world. The rulers of Japan, or the shoguns, thought of the rest of the world as barbarians, and didn’t want corrupt foreign ideas to pollute Japanese society. For that reason, the Japanese lacked all modern technology, and it was for that same reason that July 8, 1853 marked one of the greatest turning points in Japanese history.

On that day, US Commodore Matthew Perry sailed into Edo Bay with orders from President Millard Fillmore the Japanese to open Japan to the outside world, even if using force was necessary. The Tokugawa shogunate was in charge of Japan at the time and the government attempted to show the strength of Japan’s military, but Commodore Perry was well aware that his military advantage was superior. Eventually the Tokugawa realized that their forces are no match for the American military might, so in 1854 Japan gave in and signed the Treaty of Kanagawa with the US. Once Japan was open to the US, there was no way to close it.

Japan in due course signed treaties with England, Russia, and Holland. The stage was now set for revolution in Japan, leading to the Meiji Restoration, and ultimately to the beginning of industry. Japanese daimyos launched a brief rebellion and were able to overthrow the Tokugawa. “Rather than submit to the same fate (as Korea, China, and other East Asian islands being dominated by the West), Japanese leaders decided on a bold and unprecedented strategy…to initiate a massive modernization program…” (Nardo, 21) They believed that there was no other way for Japan to become a great independent nation, and through odernization Japan could be militarily and economically equal to the Western powers. The newly empowered Meiji made a major change – industrialization. He sent young upperclassmen to Europe and America to learn engineering, economics, and military science. Every year he ordered the construction of new railroads, steamships, ports, and canals. Huge corporations now dominated the economic landscape. Industrialization arose in Western European countries because they desired it. People always wanted more, and they wanted it fast.

Effects of Industrial Revolution in the World. (2018, Sep 18). Retrieved from http://studymoose.com/effects-of-industrial-revolution-in-the-world-essay 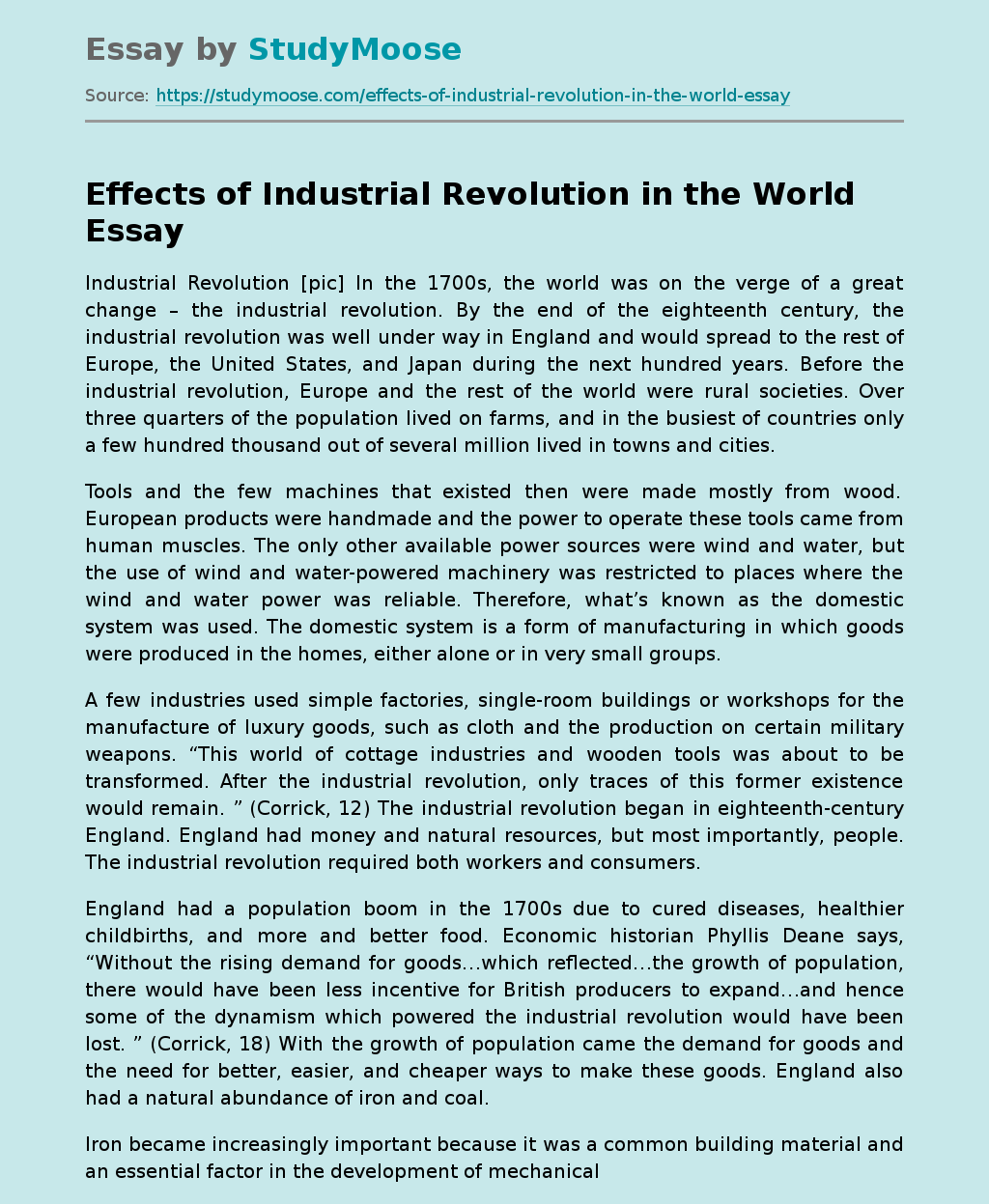