Effects of discriminatory practice in Health and social care

The above case study is highlighting discrimination. This is the unequal treatment between individuals and it is a negative action towards members of a certain group. The bases of discrimination include: culture, disability, age, social class, gender, sexual orientation, health status, family status and cognitive ability. The discriminatory practise used in the case of Jeta is predjudice. This is judging someone and making an assumption without having any solid evidence to support the judgement, on the basis of their appearance or what group they belong to.

Don't use plagiarized sources. Get your custom essay on
“ Effects of discriminatory practice in Health and social care ”
Get custom paper
NEW! smart matching with writer

Jeta is experiencing this as her teacher is making a false assumption about her thinking that she is lazy and naughty as her standard of performance in school assesments is decreasing.

There are many contributing factors that can lead to the predjudice that Jeta is experiencing. One of these factors is social background. Jeta comes from a “rough” background, lives alone with her mother who is a single parent and her father is in prison.

Another factor leading to predjudice could be socialization. This is when the media create demeaning stereotypes about specific groups of people. The media assumes that if someone is in prison, they are associated with bad behaviour and are automatically given a negative impression on. As Jeta is related to someone in prison, the teacher is assuming that she’s equally as bad and discriminates against her. The teacher is almost “blaming” the father situation on the poor school work produced by Jeta.

Another discriminatory practise that Jeta is experiencing is stereotyping.

Stereotyping is a widely held but fixed oversimplified image or idea of a certain type of person. Stereotyping can have a demetrial effect on the individual involved.They involve generalizations about the most common characteristics of members of the group. There are many factors which could suggest why Jeta is being stereotyped. The first is social categorization. This is classifying people into groups based on common attributes that individuals share. In relation to Jeta she is being stereotyped as “lazy” because the standard of her school assesments are dropping. She is also being stereotyped as “naughty” and this could be due to the social aspect that her fathers in prision meaning she is being percieved as this naughty child.

Jeta is being stereotyped as this “lazy” persona and due to her age, the teacher isn’t listening to her despite being told numerous times by Jeta that she cannot see the board from the back of the classroom. Jeta’s age could be an indicator as to why she is being stereotyped as she is insignificant compared to the teacher and has little or no power so her opinions and views are simply ignored. Another discriminatory practise that Jeta is facing is inequality. This is where people are not treated the same because some individuals have more power, authority, money etc. Jeta is experiencing this as she is not being granted the same opportunities to education and rights to learn as everyone else in her class. Due to this inequality she could be left in a vunerable position as she could be at a risk of falling behind in class and doing even worse in assessments than before. The main base for discrimination is this case study is Jeta’s diability. She has poor sight and this explains her low standard of work in lessons. She is being discriminated for having this disability and this could result in her feeling vunerable and cause low self esteem.

She is being segregated from the rest of the class being sent to the back of the classroom and this could knock her confidence. This is also making the situation worse as Jeta will not be able to focus on the tasks set in class as she cannot see what is is being taught. Instead of providing Jeta with the correct additional learning support she requires, the teacher has placed her right at the back of the class, segregated from her other classmates. The Disability Discrimination Act (DDA) makes it unlawful to discriminate against someone who has a disability. This act is covered by most sectors including the education sector which means it should be covered in all schools and organisations. The DDA covers eyesight problems so Jeta’s needs should be met. Initially, Jeta’s teacher is being unlawful as she isn’t adjusting to the DDA standards to suit Jeta’s needs. If no changes are made, Jeta’s eyesight could deteriate and worsen. Jeta currently has no glasses or any form of equipment to help imporve her eyesight so being at the back is not helping the situation in regard to Jeta.

Effects of discriminatory practice in Health and social care. (2016, Apr 14). Retrieved from https://studymoose.com/effects-of-discriminatory-practice-in-health-and-social-care-essay 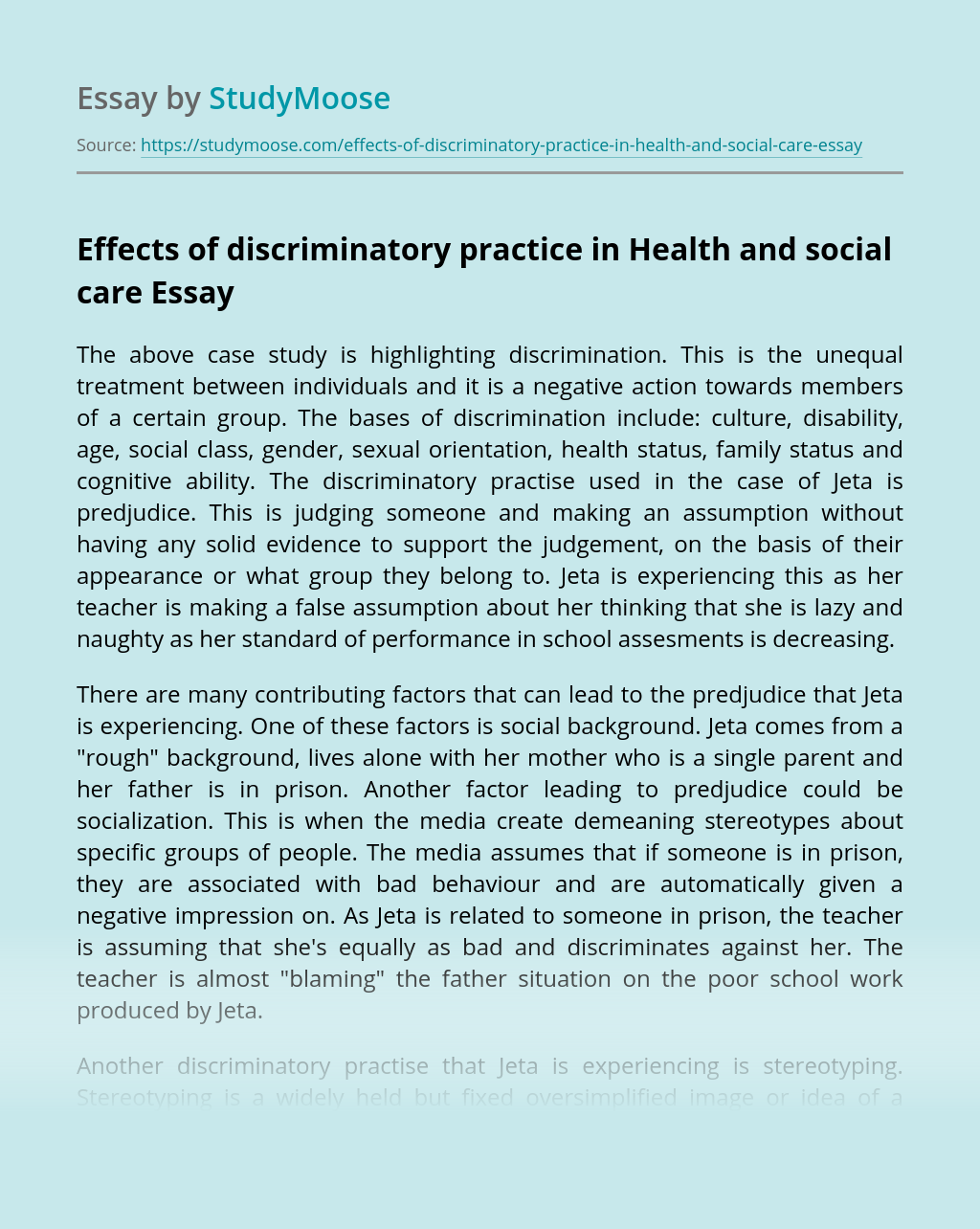