In recent years social media has become an important asset of student’s life. Teenagers satisfy themselves by using social networking sites like Facebook, Twitter, Myspace and many more. Their life now depends on social media to interact with each other. Therefore, it becomes a basic need for them. Social media typically involve interactions of people through social networks and blogs. Social media is defined as a platform that helps a user to connect with other users through simple internet access.

Don't use plagiarized sources. Get your custom essay on
“ Effect of Social Media Addiction ”
Get custom paper
NEW! smart matching with writer

Consequently, social media have been upgrading day by day. As a result, more teenagers get indulge on social media for their intercourse. Some people argue that advancement of social media threatens the life of teenagers because they are addicted towards social media.

However, others believe that it enhances the scope of teenagers towards education and culture. The new generation is the electronically addicted generation. Due to this addiction teenagers face many effects in their lives. This report aims at the different effects caused by social media on teenagers.

Moreover to what extend social networking sites effects teenagers on their school success, relationship status, social life. This report also focuses on solutions of the given effects.

Social media is a complex network in which people design their own profile and become users. After that, enlist other users in the profile and then interact socially in a virtual world of social media and exchange information in a close network. Advancement in the technology alters the learning technique of teenagers. They reside in a world of technology as a result, get technological capability prematurely.

Moreover, this capability is very significant in their academic results (Prensky, 2001). It is carried out that teenagers operate these social sites for doing pleasure activities rather than for academic success (Luckin et al, 2009, p. 87-104). Specific investigator bring into light that high school student operates these media only to strong their social dominance over the other users (Ellison et al.
2007, p. 1143-1168).

Teenager’s are easily amused by social media due to its advancement. Nowadays, facebook is the most popular social site among teenagers. Hindustan times (2012) reveal that “India crossed the 100 million internet user’s” (p. 7). Moreover HT surveys exposed that 24% of respondent used social media on a daily basis and 52% say they have more than two profiles on different social media. It is estimated that 73% of teenagers prefer to interact on facebook, 48% rely on Myspace and Linkedin have a usage of 14% (Lehhart et al. ,2010 , p.25). There is a steep rise in the usage of social networking sites by youngsters. However, a survey was conducted named as “parent and teen” survey and 935 individuals participated in it in America it depicts that in 2006, 55% of the teenagers were the daily users of social media (The Nielsen Company, 2009). Furthermore, usage of social media incremented by 30% from year 2006 to 2007 (The Nielsen Company, 2010). Observations conclude that the main purpose to use these social media were to remain in contact and to make an influence on the social network frequently visiting it.

Social media is very conductive to spread information about the calamities situation around the world. As a result, teenagers get aware of the world around them. In contrast, of having positive effects some researchers also revealed the negative and addictive influence of social media on teenagers wellness. In addition, they start living in the virtual world of social media. Moreover, their physical contact with other people decreases to a great extend. However, some teenagers are so addicted to social media that they start describing their daily activities on social sites. If they don’t check their profiles at regular intervals,they get a sensation of despondent, aggressiveness and separation. Moreover, when addiction hinders the academic path of teenagers, then social networking sites become important instead of education, family, peer attraction and recreational activities. When tension builds to perform well in the exams, the earlier thing that is affected by the social media network is educational approach.

Many users prefer to interact over facebook only to avoid real societies and problems. Further investigation brought into light that whether addiction to social media like facebook is a threat to higher education. Kandell (1998) stated that college students are at a verge of developing social addiction towards facebook. In additional survey by Sharifal et al (2011) on 380 female Malaysian university students state that these participants are influenced by facebook and considered to be addicts.

Social networking sites have the ability to use productively in educational purposes by students (Greenhow, 2009, p. 42-47). Particularly, it depends on the teenagers to what extend they will use social media as their advantage. Sugar (2013) concludes that initially there were two networking sites set up for social media purposes, these were “sixdegree.com” in 1997 and “classmate.com”. However, it gives Different identity to different users. Through social media users feel like connected they can share and evaluate thing with one and another. At the most basic level social networking sites build up the strength to make friendship. Moreover, the teenager may feel good in different environments like in college, school. Also, they feel like responsible.

It also reveals that using media enhances the efficiency of students towards academic studies. The main focus is how a user uses social media to his advantage. Furthermore, teenagers can remain in contact with the family members. Despite of these advantages only achieved by taking conception that many teenagers use social media in a good way. Social media have many advantages in this contemporary world of teenagers. They learn how to take initiatives in making friends.. The scope of their knowledge increases drastically. However, Interacting socially open the gaze of the many valuable things like knowledge about learning, culture views.

Social media networking sites are not just the mere source of entertainment. Teenager’s must use it as a source of information to accelerate their knowledge. After that, pursue good grades in academic studies. Teenager’s elevate their personalities using social networking media. Social media have many negative impacts on user’s. However, teenager’s must take social media as an open test in which they can multiply their social skills. It acts as a medium for communication between peers, relatives. User’s gain experience. Moreover teenager can attain technology excellence in their early while operating these media. As a result, they will mold themselves according to the change in the technology. Moreover, they will get knowledge of the information and technology. Universities, colleges and even some public organisation use social sites to interact with the people.

However a positive approach must be set towards social media. User’s try to express themselves truly sometimes on social networking sites. As a result, they learn how to take initiatives in order to make friends. Learn to know about different societies and culture. Teenager’s must adopt the positive aspect of social media. So that they can have a personal advantage in the nearby future. It has many aspects according to the users view. Teenagers must use the social media in a timely manner not in a excessive. They should start preparing their daily schedules on social networking usage. The decision to get addicted or to get promoted by social media depends on the user. So users must use social networking sites for benefits rather than for their destructiveness. Teenagers must use it in a timely manner. Should check performance of their academic session regularly as it is affected by social media or not. They must give to every physical activity. 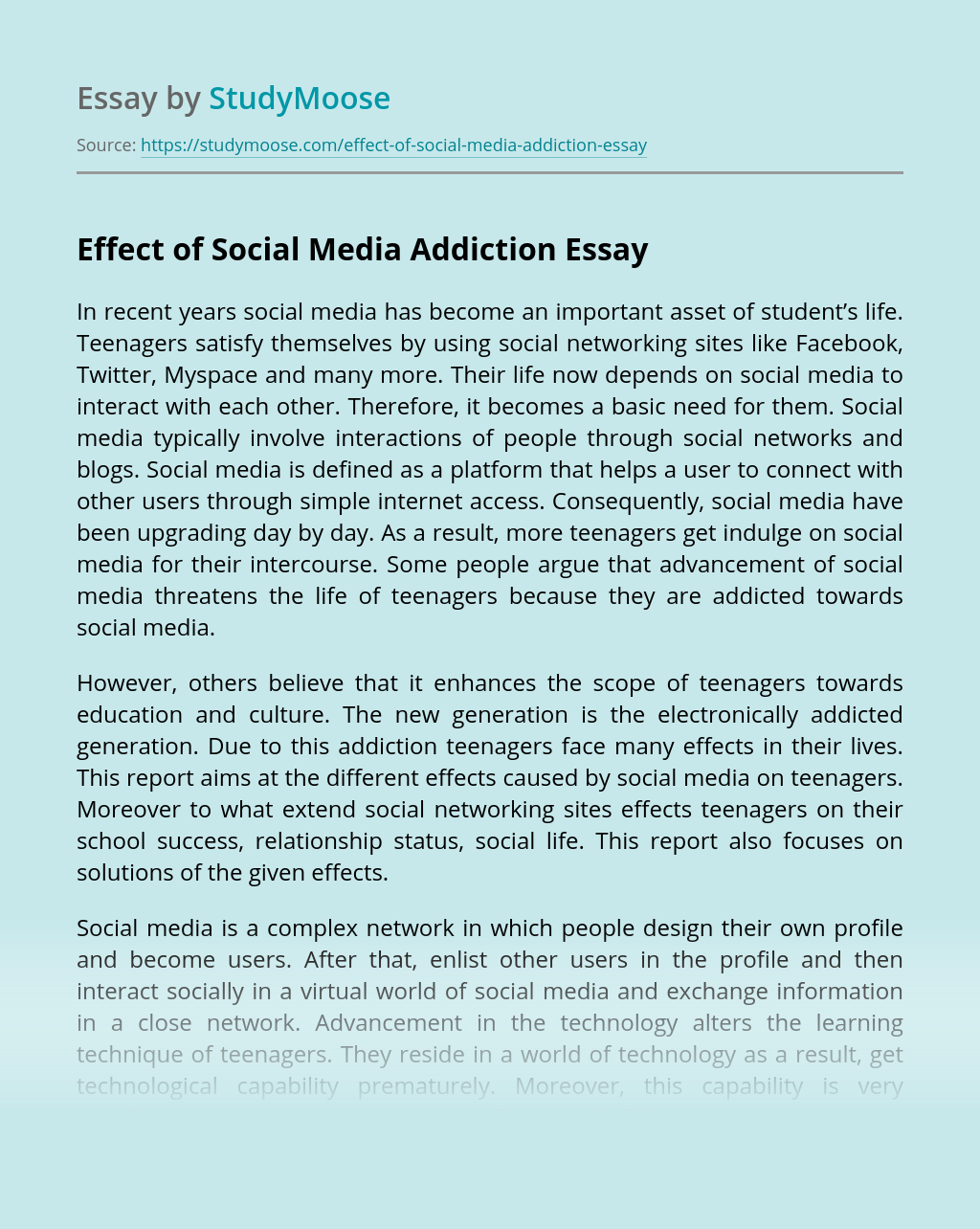