Effect of Ph on Food Preservatives

Sodium Benzoate is a common food preservative used in food products such as jams and jellies, soft drinks, pickles, condiments etc and in tinned products in the market. This experiment aimed to determine whether benzoic acid is formed from it’s superior soluble form sodium benzoate in stomach acid, which is simulated by HCl (pH=2). It has been seen that at a low optimum pH, i.e. in the presence of sufficient hydrochloric acid, sufficient benzoic acid is yielded. The percentage yield is determined from the calculations of the theoretical (stoichiometric) calculations and the actual yield from the reaction.

Turn in your highest-quality paper
Get a qualified writer to help you with
“ Effect of Ph on Food Preservatives ”
Get high-quality paper
NEW! AI matching with writers

Also throughout the experiment, some basic laboratory operations such as measuring mass and volume, separating solids from liquids by vacuum filtration and drying solids are familiarized with.

Hence in the reaction involving sodium benzoate and hydrochloric acid solution, in the presence of high concentration of hydronium ions, protons will be transferred from the strong acid H3O+ to the basic benzoate ion. This will yield benzoic acid, C6H5COOH which precipitates from the solution as it has a really poor solubility (0.34g/100ml). The fundamental reaction is sketched out below: As can be seen from the difference in the pKa values, H3O+ is a much stronger acid than benzoic acid. So, the equilibrium of the reaction strongly favours its completion and hence hydrochloric acid which ideally simulates the acidic conditions of the stomach, does convert benzoate to benzoic acid.

Safety: Throughout the lab safety goggles, protective gloves and aprons were worn while carrying out the experiments. While transferring the HCl to the reaction vial in the student hood, the head must never be inside the glass hood as vapour inhalation can cause choking hazard and irritations. Also the hosepipes were carefully plugged in and out of the filter flask to avoid breakage or tipping of the Hirsh funnel.

As the primary objective of this experiment was to find out whether sodium benzoate reacts with simulated stomach acid to form benzoic acid, the results clearly indicate that a successful reaction close to completion, if not fully complete, has taken place. The percentage yield calculation reveals that approximately 90% of benzoic acid as white precipitate were recovered from the reaction.

There were a number of factors which might have contributed to the 10% deficiency in the final yield. It needs to be mentioned though that a percentage yield of less than 100% is achieved because the drying of the solid mass after vacuum filtration was sufficient to give a practical number. During measurements of mass of benzoate and benzoic acid when it’s formed, there were obvious human errors involved. Some benzoates were lost while transferring to the conical reaction vial from the watch glasses, and further loss of the product benzoic acid might have taken place when the solution mixture was tipped on the Hirsh funnel.

We couldn’t determine if the reaction was complete or not, so we might not have had all the salt converted 4. The solution might not have sufficiently and gradually cooled though every effort was made for that, hence there could be lack of benzoic acid crystals forming. The litmus test might have contributed to a significant loss of the precipitate, but only one instead of multiple tests were performed to see if the reaction mixture was acidic enough. Given the carefully controlled experiments and the 90% yield, it can be deemed that the methods used to perform the experiments are full proof and performed as immaculately as possible.

Conclusion The fact that a new substance is formed indeed when sodium benzoate is placed into a simulated stomach acid has been demonstrated successfully with the aid of the experiments and aforementioned results. A 90% yield suggests that all the basic operations were carried out as neatly and carefully as possible and measures taken to minimize obvious errors which could take place while performing the experiments. All in all, the experiment provided a practical evidence of the theory behind the hydrolysis of sodium benzoate and percentage yield of it’s product.

Effect of Ph on Food Preservatives. (2016, Dec 15). Retrieved from http://studymoose.com/effect-of-ph-on-food-preservatives-essay 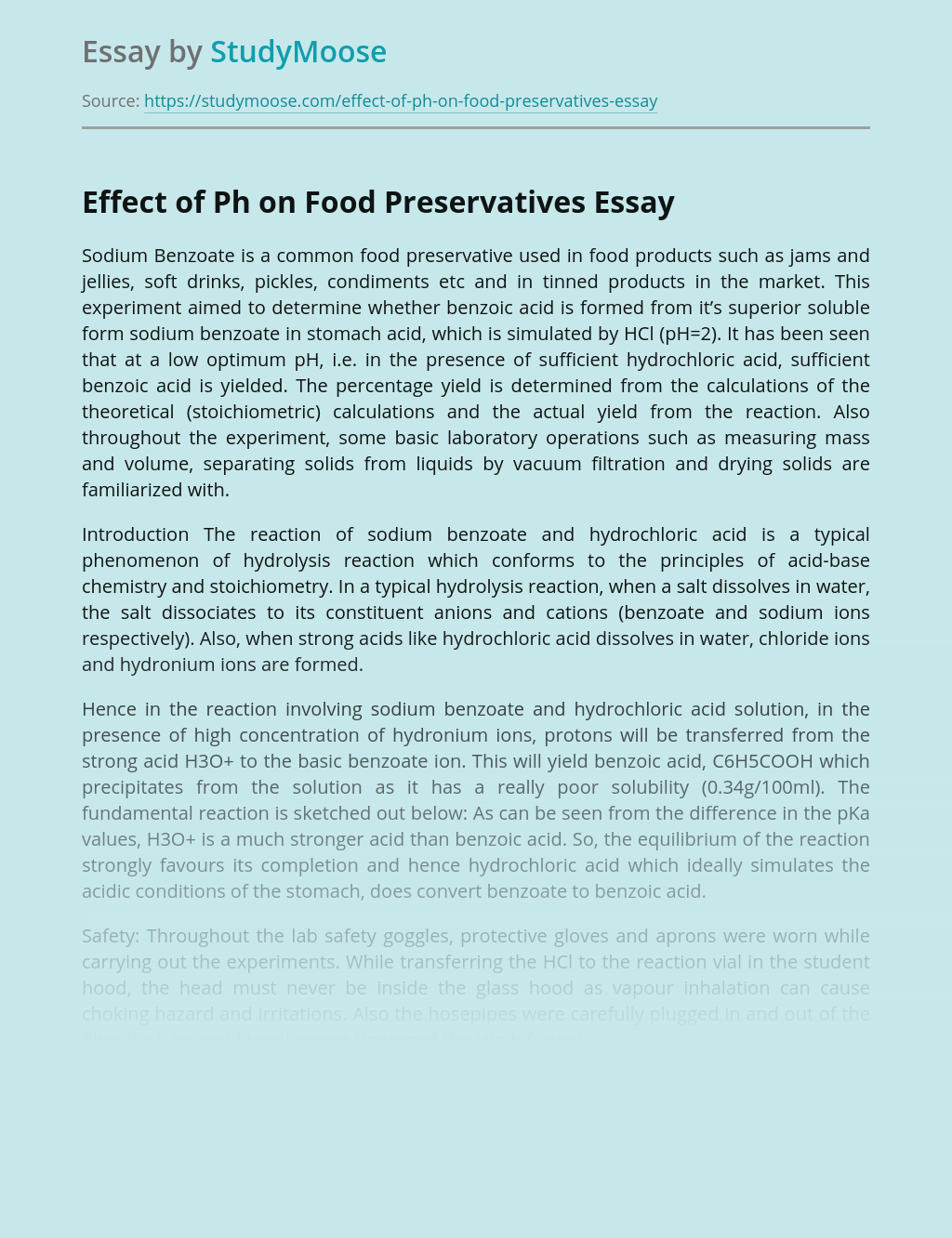 Turn in your highest-quality paper
Get a qualified writer to help you with
“ Effect of Ph on Food Preservatives ”
Get high-quality paper
Helping students since 2015
Stay Safe, Stay Original