Effect of both parents working

“Good, honest, hardheaded character is a function of the home. If the proper seed is sown there and properly nourished for a few years, it will not be easy for that plant to be uprooted.” ~ (George A. Dorsey. http://www.quotegarden.com/parents.html ). The fact that parents nowadays lack attention to their children has caused the child to have a weak performance, bad behavior, and a negative outlook had grown in popularity among people. It is possible to identify two main aspects in which parents don’t give their children the right attention they need as a child; the outer aspects, and the inner aspects.

Turn in your highest-quality paper
Get a qualified writer to help you with
“ Effect of both parents working ”
Get high-quality paper
NEW! AI matching with writer

Consequences arise when parents don’t spend enough time with their children, one would be behavior toward the society, and the other is the negative affect on the family bond. First of all, children might seek attention from people around them, which may result might make him loose them. For example, when a child comes home from school, he/she likes to talk about what has happened in school, and kinds of details about his/her day.

However, if that person was not around on a regular basis, the child will slowly start to seek attention from elsewhere. Second comes the lack in the family bond. For example, parents will get used to not having their children around, therefore, consequently will not value their parents presence like they should, so neither of the two parties will value the other and as a result, this valuable parent-child bond will start to get weaker with time.

Thirdly, communication between parent and child will be effected, which will lead to many issues ahead. For example, when a child lacks communication with his parents, attention will be pursued with someone else, which is not an advantage for either the child or the parent. Many children tend to develop a sense of shame and embarrassment when such issues arise. Moreover, if attention is still not found, emotional issues arise, where children start to bottle up instead of opening up, and this itself may have a negative effect on the emotional stability of the child. Finally, when not much time or attention is given to children, there will be a gap in a child’s life as he/she grows up. A strong bond with children creates the most wonderful memories of time spent together that will last a lifetime, and when such bond is affected, memorable moments decrease along with their value. For example, when a child grows up, if a memory seems to be unclear, looking back at a precious photo in an album brings back all the good memories spent that day, when the photo was taken.

The emotional, physical and mental environment the child is brought up in plays a big role in an individual’s life even up to late adulthood. Firstly, if there was a lack in affection expressed by the parents, children might not have enough affection towards their own parents, which is what they have learnt from their own family and what they will be considering to be normal. For example, children will not love their parents enough to look after them in old age. Secondly, lack of moral guidance. For example, children will not be able to develop the sense of right or wrong, unless they were guided and told over and over again by their parents. Thirdly, children might suffer from emotional vacuum. For example, children will always try to search for someone to fill this this emotional gap they have, which could result in children drifting to the wrong path, and as an adult this individual might develop regrets to the past and force him/herself to escape reality via drugs or alcohol, which could result in all sorts of addiction problems in time. Finally, a child might not get to draw the great qualities of character his/her parents have, and instead draw in negative behavior and qualities from his/her friends at school. For example, children who lack the care and attention of their parents try to get it through a strong act, such as stealing, lying or bullying.

In conclusion, parents have to be careful in many aspects of a child’s life while growing up. A person’s childhood is such a critical time in an individual’s life because it has the biggest input in shaping and molding the individual as an adult. The better and healthier the childhood is, the more successful an individual is in many aspects of life such as being a parent, work, career, social life, health, cognition etc.

Effect of both parents working. (2016, Feb 21). Retrieved from https://studymoose.com/effect-of-both-parents-working-essay 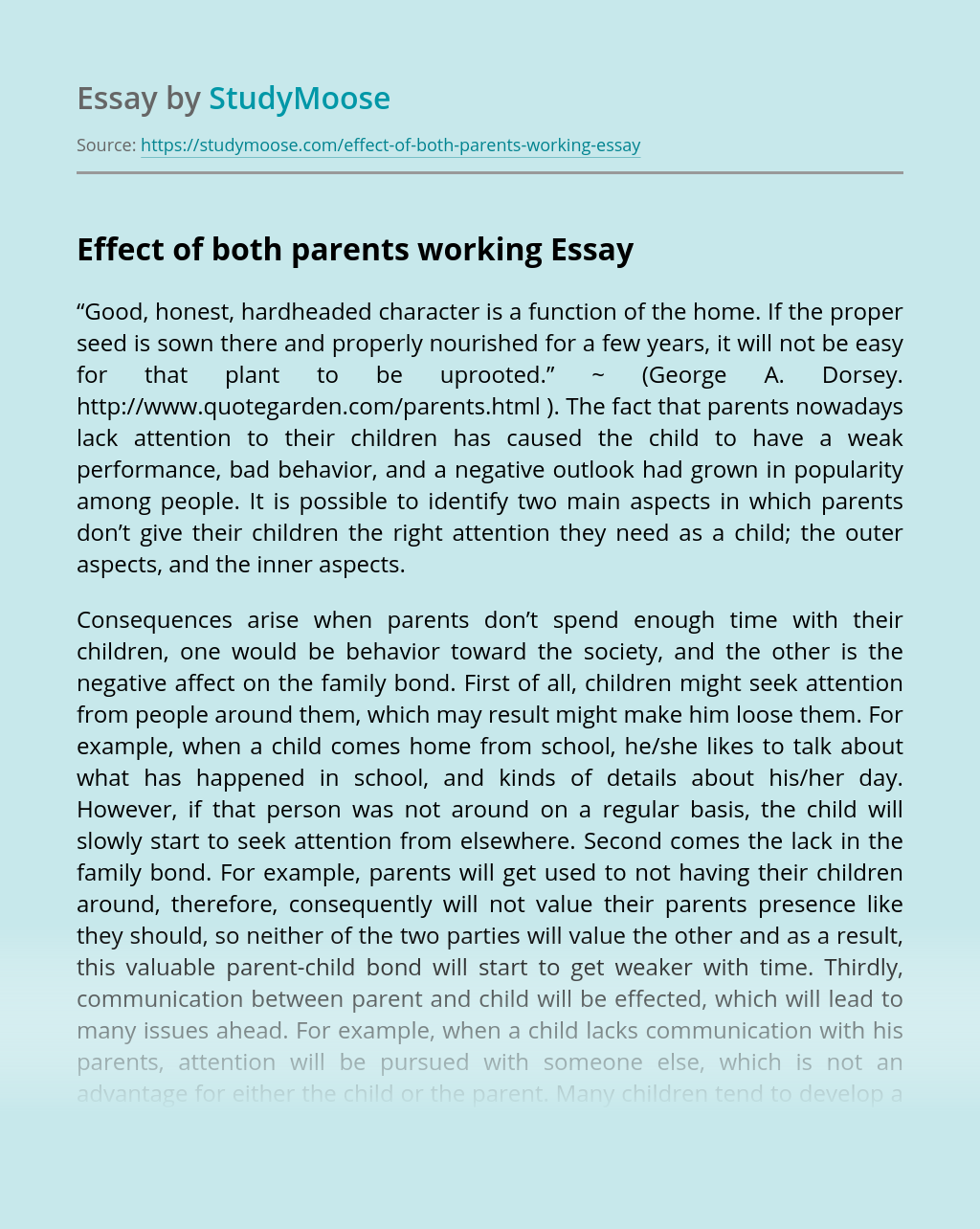 Turn in your highest-quality paper
Get a qualified writer to help you with
“ Effect of both parents working ”
Get high-quality paper
Helping students since 2015
Stay Safe, Stay Original