Domestic sewage pollution is the pollution caused to the earth by domestic use. It contain of sewage originating primarily from kitchen,bathroom, and laundry sources and also waste from food preparation, dishwashing, garbage, toilets, baths, showers, and sinks. Sewage is the term used for wastewater that often contains faeces, urine and laundry waste. Sewage disposal is a major problem in developing countries as many people in these areas don’t have access to sanitary conditions and clean water.

Untreated sewage water in areas without access to sanitary conditions can contaminate the water, which can result with diseases.

Don't use plagiarized sources. Get your custom essay on
“ Effect of Domestic Sewage Pollution ”
Get custom paper
NEW! smart matching with writer

Sewage is the part of wastewater that is contaminated with faeces or urine, but is often used to mean any wastewater. When this is done sewage refers to wastewater from sources including domestic, municipal, or industrial liquid waste products disposed of, usually via a pipe or sewer system.

Furthermore, sewage is liquid waste produced by households and industries.

Sewage can be subdivided into black water and grey water. Black water sewage is the stuff that comes out of toilets. Its contents may include faeces, urine, paper, condoms, tampons and water and any other material that people find convenient to flush down toilets.

Grey water, on the other hand, consists of the out flow from wash basins, baths, kitchen, washing machines and sinks. The contents of gray water may include food remains, oil, detergents, dirt and water. All of the disposal sewage directly or indirectly gives the effects to environment.

When toxic substances enter a body of water, they will be dissolved, become suspended in water or get deposited on the bed of the water body. The resulting water pollution causes the quality of the water to deteriorate and affects aquatic ecosystems. Pollutants can also seep down and effect groundwater deposits. Almost all of sewage and industrial wastes are discharged into the rivers. Because of this, pollutants enter groundwater, rivers, and other water bodies. Such water, which ultimately ends up in our households, is often highly contaminated and can carry disease-causing microbes.

Domestic sewage contains a wide variety of dissolved and suspended impurities. It amounts to a very small fraction of the sewage by weight, but it is large by volume and contains impurities such as organic materials and plant nutrients that tend to rot. The main organic materials are food and vegetable wastes. Plant nutrients come from chemical soaps, washing powders and others. Domestic sewage is also very likely to contain disease-causing microbes. The various substances that we use for keeping our houses clean add to water pollution because they contain harmful chemicals.

Most detergents and washing powders contain phosphates which are used to soften the water, among other things. These and other chemicals contained in washing powders affect the health of all forms of life in the water. So, when sewage enters a lake or stream, microorganisms begin to decompose the organic materials. Oxygen is consumed as micro-organisms use it in their metabolism. Pipe Emitting Sewage Ecological Damage: Sewage-contaminated water causes eutrophication, which is the increase in concentration of chemical elements required for life.

The nitrates, phosphates, and organic matter found in human waste serve as a food for algae and bacteria. This causes these organisms to overpopulate to the point where they use up most of the dissolved oxygen that is naturally found in water, making it difficult for other organisms in this aquatic environment to live. The bacteria are basically strangling the other organisms. Some of the organisms that do overpopulate from this can also be disease-causing microorganisms.

Phosphates are also found in soaps and detergents, but there are other household products that we use every day that can be toxic to many animals and humans if they are dumped directly into a water body. Sewage also contains high levels of nutrients such as phosphate and nitrates which can lead to the “deaths “of rivers lakes and seas through eutrophication. High levels of phosphate and nitrates promote the rapid growth of algae. When these algae “bloom”, die and decompose they remove dissolved oxygen from the water.

The unavailability of oxygen then leads to the death of fish and other animals that need oxygen from the water. Excess nutrients are discharged to the marine environment through sewage, fertilizers from agriculture and by nitrogen oxides from burning fossil fuels. Increased nutrients may lead to eutrophication which is an excessive growth of marine plant life and decay. Plants such as algae often experience a population increase (called an algal bloom) which limit the sunlight available and cause lack of oxygen in water.

When oxygen levels decline, marine animals, coral reefs, seagrass beds and other vital habitats in the Wider Caribbean Region suffer and may die. Some algal blooms are toxic and may harm or even kill whales, dolphins and other marine mammals – and cause hundreds of millions of dollars worth of damage to commercial fisheries. Health Risks: Domestic sewage pollution also affects the health of human especially to the swimmer or bathers who are directly have a contact with the polluted water. Bathers are at increased risk of contracting illness due to bacteria and viruses present in sewage effluent.

According to GESAMP (2001), contamination of the coastal marine environment by sewage leads to significant numbers of infectious diseases linked to bathing and swimming in marine waters and to the consumption of seafood. Human exposures to toxins associated with algae blooms also impose significant risks. Besides that, the risk does not come from direct contact of polluted water only. It is also comes from affected fish. Shellfish strain water through their gills to trap microscopic plants and animals for food. If the water was contaminated with disease-causing bacteria, these could be consumed as food by shellfish.

When eaten raw or partially cooked, these shellfish can make people sick. Certain fish in contaminated waters can accumulate high levels of toxic substances. When these foods are consumed frequently over a lifetime, they may increase the consumers’ risk of adverse health effects. Detergents can cause liver and kidney damage, while sewage water carries diseases such as Giardiasis, Amoebic dysentery and Cholera. Moreover, most illnesses are caused by pathogens, which are biological/infectious agents that cause diseases or illnesses.

They cause a wide variety of acute illnesses including diarrhoea, cholera, dysentery, typhoid, and hepatitis A. Pathogenic bacteria can survive in the sea from a few days to several weeks; viruses can survive in water, fish or shellfish for several months whilethe hepatitis virus can remain viable in the sea for over a year (GESAMP 2001). Depending on its source and collection methods, sewage may also contain a range of chemicals and specialized wastes including industrial chemicals, nutrients such as nitrates and phosphates, heavy metals, pharmaceuticals, medical wastes and oils and greases.

These result in additional threats to human health. Economic Loss: As a result of polluted water, our beach and other water source attraction of tourism become polluted and dirt. The closing of beach and commercial shellfish beds due to sewage contamination can lead to high income loss. The clean beaches have many advantages for humans and commercial seafood farms as well as for the wildlife which is they are safer for the public and encourages people to come and use them, which will improve local economy.

They also give benefits to everyone now and in the future. The improper disposal of sewage poses risks for any society whether it is in developed North America or in underdeveloped Bangladesh. Sewage containing human feces and urine can lead to a wide variety of illnesses if such sewage is not properly treated. These illnesses include meningitis, typhoid, gastroenteritis, hepatitis, salmonella infections, cholera, bacilliary dysentery, ear infections, conjunctivitis, pneumonia, septicemia, skin rashes and diarrhoea. 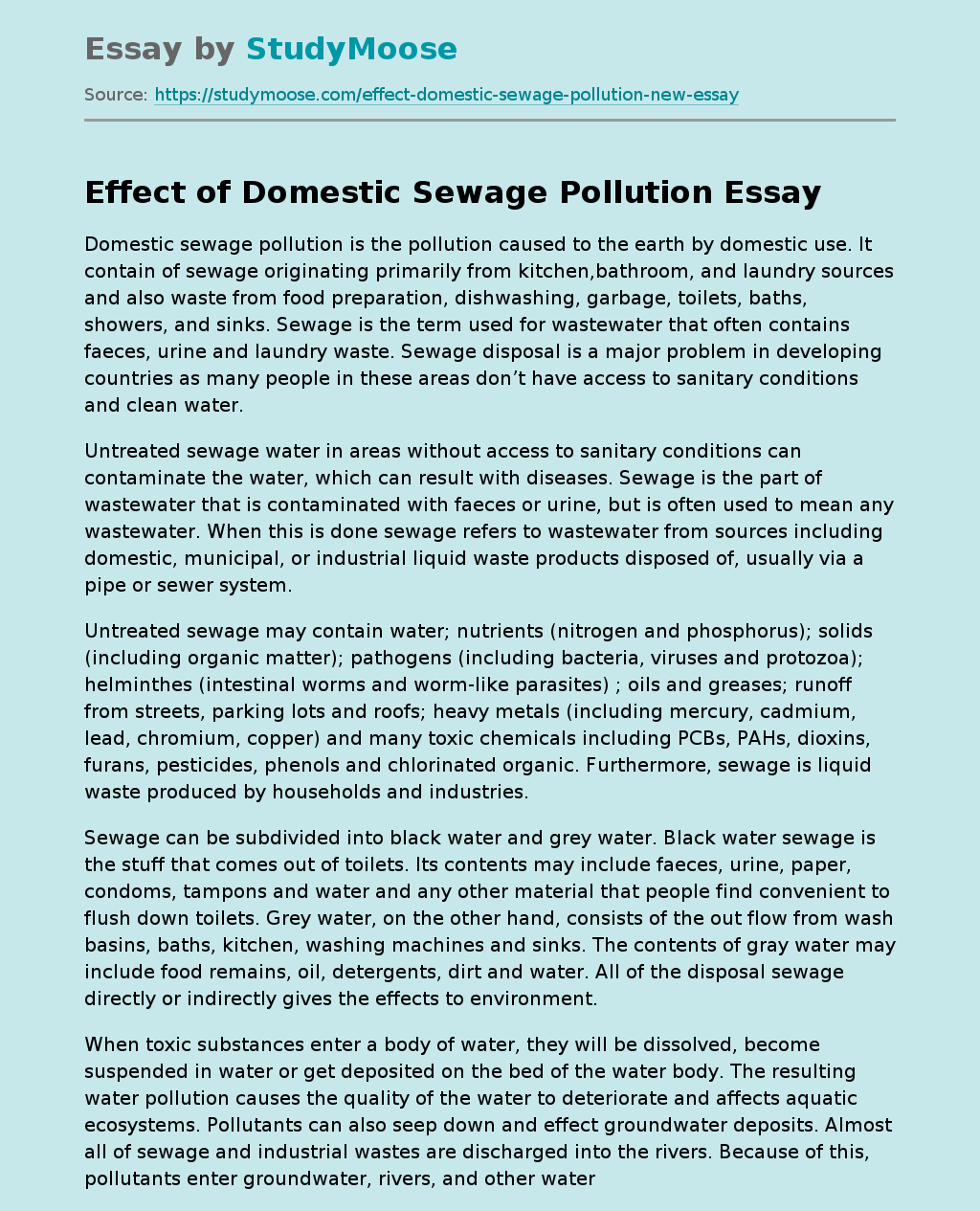