To whom is the sermon addressed?

The sermon is addressed to the congregation.

According to Edwards, why is God wrathful?

People are wicked sinners, and God’s wrath is infinite and arbitrary.

Reread the sixth paragraph. What people, according to Edwards, are not in the hands of this angry God? How is this state achieved? Reading the sermon he claims that, “Thus all you that never passed under a great change of heart, by the mighty power of the Spirit of God upon your souls; all you that were never born again, and made new creatures, and raised from being dead in sin, to a state of new, and before altogether unexperienced light and life, are in the hands of an angry God,” therefore I infer that the individual whom have passed a great change by heart by, and was born and again and made into new creatures, are not in the hands of this angry god.

Don't use plagiarized sources.
Get Your Custom Essay on Sermon “Sinners in the Hands of an Angry God” by Jonathan Edwards Just from $13,9/Page

I believe he conjectures this by isolating it and remaining on the topic of the individuals who are in the hands of the angry God.

Figurative language is language that cannot be taken literally since it was written to produce a certain effect. Edwards makes effective use of figurative language as he speaks of God’s wrath. Find three examples of his use of figurative language and explain why they are effective. To convey his sense of tone and attitude, he uses rhetorical techniques, imagery, repetition and metaphors to display his piercing tone. In his sermon he repeats the term “wrath”, which means intense fury, over and over again creating it vibrant how angry god is with his congregation/people. Edwards is essentially proposing that they are atrocious individuals and deserve to burn in hell. Edwards’ piercing tone is also elated by the metaphors he uses in his sermon.

He associates several things to implement his tone. Edwards says “The wraths of God are great waters that are dammed for the present…” also he states “ The bow of God’s wrath is bent and the arrow made ready on the string, and justice bends the arrow at your heart…” In his metaphors he does not use optimistic undertones, making them harsh and to the concept. In using these metaphors, Edwards is enabling the reader(s) to understand the tone by putting it in a situation and context, which is more easily correlated. Subsequently, he uses imagery in the opening paragraph stating that when men are on Gods’ hands and they could descend to hell. Natural men are held in the hands of God, over the pit of hell knowing that you might descend into the abyss at any moment should scare you. God chose to save you until he wants to let you slope into an eternity of sweltering flames.

Using the list of Tone Words as a guide, make a list of 20 words in this selection that produce tone or attitude.

How does Edwards’ sermon reflect the ideals of this time period? It reflects on the Puritans’’ ideals and beliefs. Such as, they believed in salvation and that the fate of individual soul was predetermined by God. Also, that salvation was a private choice among God and the ‘Elect’. Elects or Saints were the ones who were saved and the ones who weren’t were ‘wicked’.

Explain how his sermon connects to a concept or theme in “The Crucible.” They both have a common theme of good vs. evil. Meaning, they mutually belief system into how they should act/live. Edwards leads his message to the Puritan people claiming that they are corrupt and must change their ways, he does this threatening method to attempt to scare them by the description of hell. Similarly, the characters in The Crucible convict each other of committing deeds against God and are very hostile about it, much like Edwards.

Sermon “Sinners in the Hands of an Angry God” by Jonathan Edwards. (2016, May 03). Retrieved from https://studymoose.com/edwards-sermon-study-essay 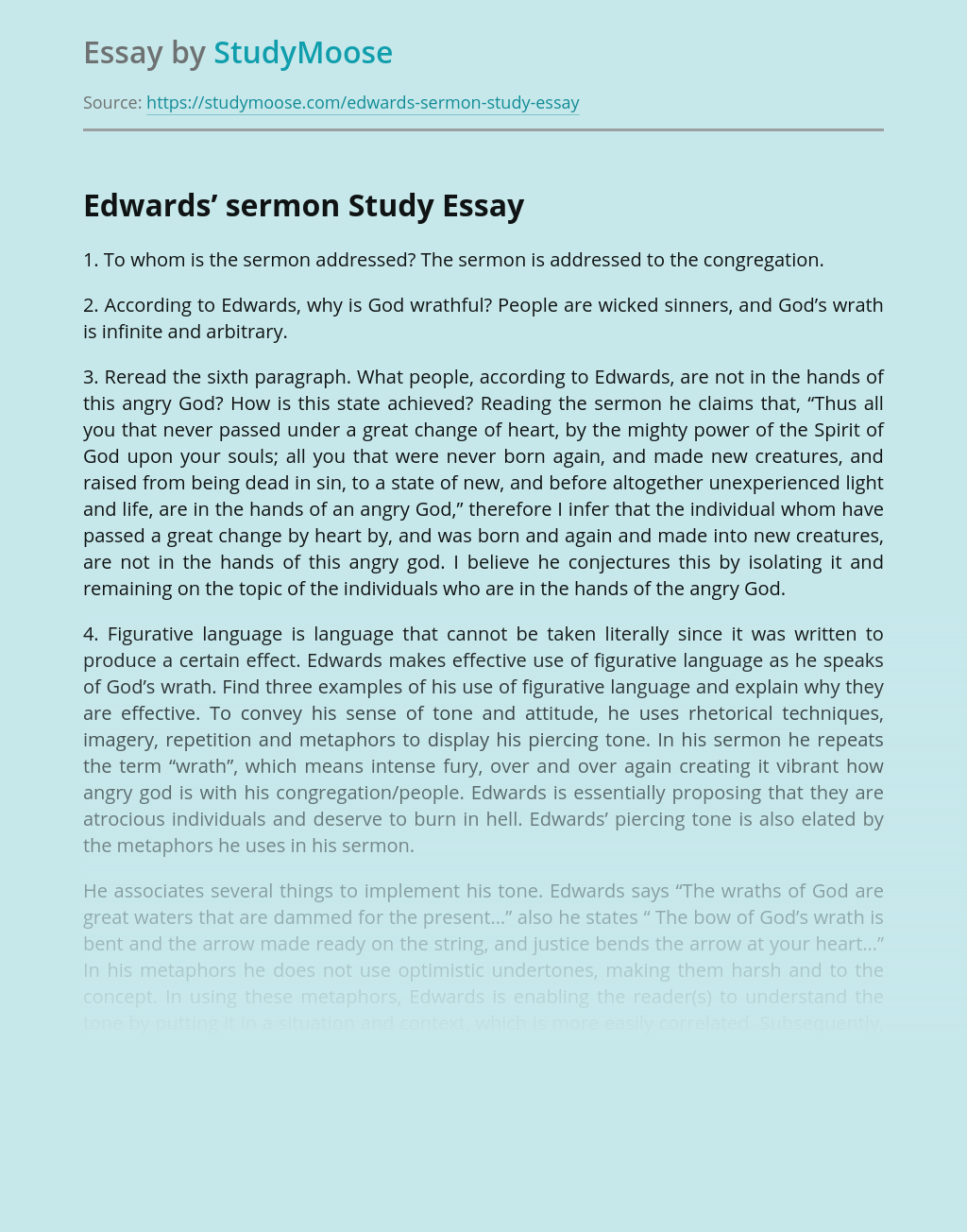 Scarce resources are very important to the country. It is a source of revenue for the country and it can be sold off for money and as raw resources for industrialization. Thus, countries would want to compete for scarce resources. An example would be the Iceland-britian conflict. As Iceland depends on the fishing industry for...

The Hundred Years War , a critical part of our history. It was dreadful and never ending . This war changed the social and economic status of many countries over this long period of time. Many people died, if not from the war then from the frightful disease called The Black Death. The war changed...

Equity warrant bonds are bonds issued with equity warrants attached. Warrants are similar to share options, and give their holder the right but not the obligation to subscribe for a fixed quantity of equity stocks in the company at a future date, and at a fixed subscription price (exercise price). When bonds are issued with...

Although one could easily isolate several specific variables that aided the parties rise, such as the failure of the GMD (Nationalist Party) or even The May 4th Movement, one must look at it more broadly to understand the bigger picture of the circumstances. When looking at this bigger picture, one can identify many key conditions...

Menelaus and Helen In 'The Trojan War'