One often finds that standing up and working in favor of the greater good usually results in negative consequences. Edward Snowden encountered this crossroad while working as a technical contractor for the NSA and the CIA. While working at the NSA’s Oahu office, Snowden began noticing various government policies and techniques that the NSA was using in order to spy on American citizens. Through phone calls and internet use, information was gathered about various citizens without their consent. After only three months of working for the NSA, Snowden began copying and leaking the disturbing secret documents regarding the NSA’s surveillance practices.

Turn in your highest-quality paper
Get a qualified writer to help you with
“ Edward Snowden ”
Get high-quality paper
NEW! AI matching with writer

The documents contained information regarding the invasion of privacy of millions of Americans from the NSA’s various domestic programs such as PRISM. Snowden then fled to Hong Kong in order to escape potential trouble with the law after newspapers began printing the leaked documents, many of which detailed the invasive spying practices against American citizens. This leads to the controversial matter of deciding whether or not Snowden is a whistleblower deserving recognition, or a traitor against his country.

Those who support him, consider him a hero protecting the people while others view him as a traitor against America.

A number of respectable people believed that Snowden should not be viewed as a patriot but rather as a traitor or defector. Those critical of his decisions also believe that his actions were unjust and “…strike at the heart of the collaboration between those nations in world affairs that stand at the forefront of protecting human freedom” (Murphy, 2014).

It is an undeniable fact that Snowden broke the contract he signed upon working for the NSA when he decided to leak the confidential information to the public. There is a great concern amongst political officials that the information leaked could possibly be used by enemies of the United States. Since the leaked information revealed the ability to monitor conversations, potential terrorists began taking action to further conceal important conversations. Many can agree that the leaked information has negatively impacted the U.S. government by “compromising military capability and defense of the country” while simultaneously costing lives and money (PJ Media, 2014).

Those who support Snowden consider his actions and sacrifice commendable because it informed unknowing citizens of the controversial actions of the government. His intentions were based on his desire “…for the public to be able to have a say in how they are governed” (Gellman, 2014). Snowden’s leaked information highlighted how the various programs gathered information without a warrant which angered citizens who became aware of the seizure without consent. Snowden believed his actions were morally justifiable as his intentions were never to harm the integrity of the United States or risk his career. He simply decided that he couldn’t “in good conscience allow the U.S. government to destroy privacy, Internet freedom and basic liberties for people around the world” (Star, Yann 2013).

Although I am aware of how Snowden’s actions have increased transparency of the government’s protocols, I lean towards classifying Edward Snowden as a traitor. I believe that if one works for a top government agency or a department with such valuable classified information, one should not leak material protected under confidentiality agreements. I agree with the Newsday article in that people entrusted with state secrets shouldn’t be allowed to take such actions. Also his decision that he was better judge of what’s in the national interest than the president or Congress shows a clear lack of disregard for the safety of our country (Newsday, 2014). The potential harm to the nation is too great to allow confidential information to exist in the hands of the general public. Overall I believe the risk of exposing governmental procedures outweighs the benefits because it leads to a lack of trust between the government and its citizens. 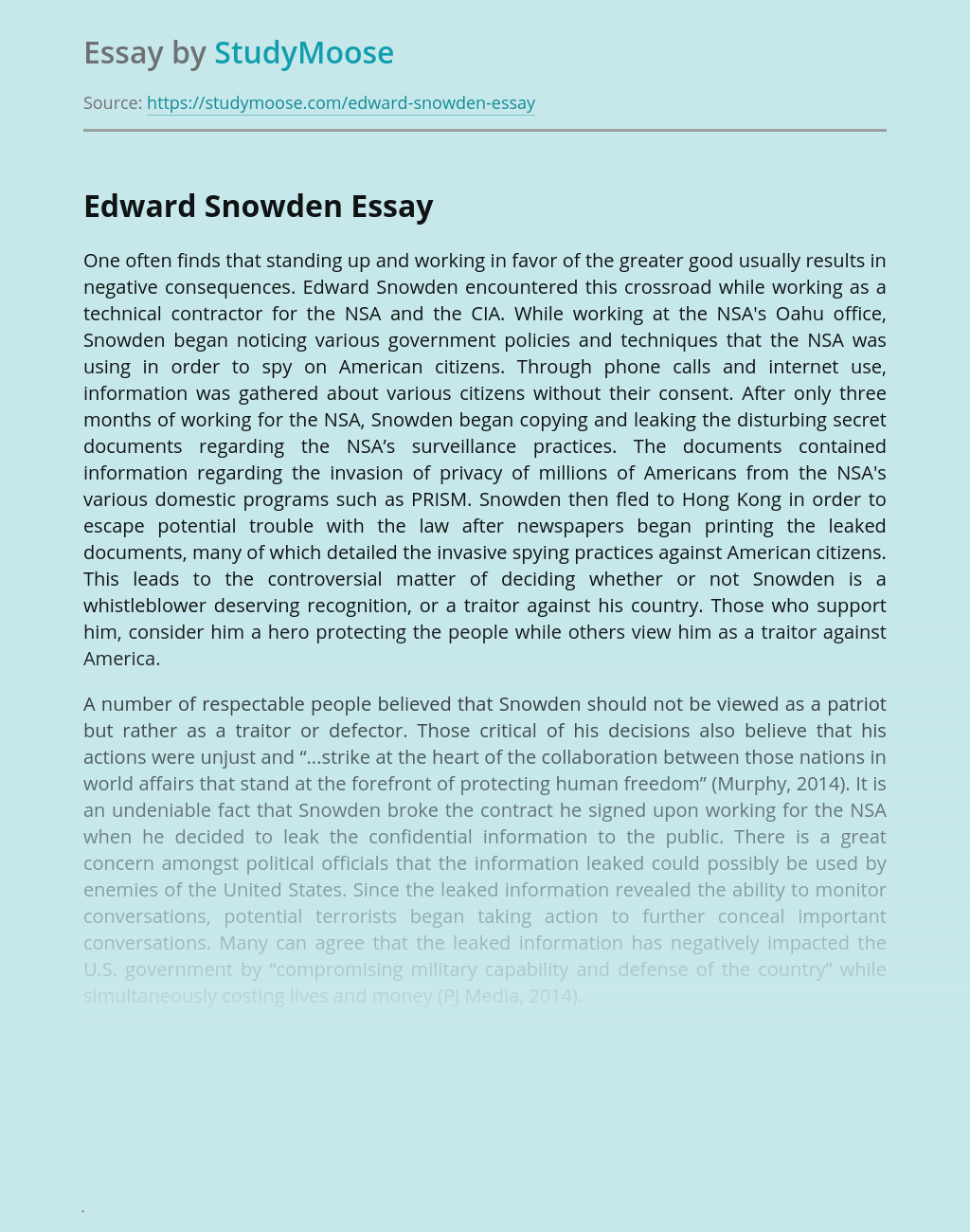 Turn in your highest-quality paper
Get a qualified writer to help you with
“ Edward Snowden ”
Get high-quality paper
Helping students since 2015
Stay Safe, Stay Original