How effectively did Edward deal with the problems he faced during the first part of his reign, 1042-1053? When Edward came into power in 1042, England was in a poor state financially and also because of threats of an invasion and this made the first few years of his rule difficult. Edward was faced with many problems which he had to overcome. These problems involved; powerful Earls, (especially the Godwine’s), the foreign policy and the domestic policy. Edward both failed and succeeded in these problems due to a number of factors.

Don't use plagiarized sources. Get your custom essay on
“ Edward Reighn 1042-1053 ”
Get custom paper
NEW! smart matching with writer

These include a lack of knowledge about his kingdom and some may argue that he was naïve in his decisions. With some evaluation, we will be able to judge if Edward was a successful King or not. One of the problems Edward faced was because of the weak position he was in: He had been in exile for 25 years in Normandy; therefore he had no knowledge of the English politics and structure of the country.

He also had no strong political allies such as Earls and Thegns to aid him with ruling the country effectively and to everyone’s best interests. One of his biggest rivals was Earl Godwine; Godwine was a politically powerful character at this time. Before Edward became King, he had allied himself to King Cnut and married Gytha who was a relative of Cnut. From 1040 onwards, he was the second richest man in the country after the king so therefore, he was in a very powerful position compared to King Edward as he had strong political allies, and great knowledge of England.

Earl Godwine played a massive role in Edward becoming a King; he persuaded the Earls to accept him. This may be so that Godwine could dominate Edward in ruling the country or to convince him of his loyalty.

In the early years of Edwards reign, Godwine took advantage of his weak position and got his family members; Sweyn, Harold and Beorn the position of Earls. His Daughter Edith, also became Edwards wife in 1045, Godwine had used his power and authority to get his family members into strong position. Godwine was an “over mighty subject” and Edward needed to counteract this. To gain more power, Edward put Normans into powerful and key positions, his nephew Ralf was made an Earl, and large estates were given to Bretons (Robert Fitzwimarc and Ralf the Staller). By 1051, Edward had managed to appoint Normans as bishops, and eventually half were filled by Englishmen and the other half by Normans and other foreigners; Godwine and English Earls hated this.

In 1050, the Archbishop of Canterbury died and instead of Godwine’s relative Aelfric being appointed, he made Robert of Jumieges Archbishop instead. The witans supported this decision, this may have been because Godwine was in such a strong position that the other Earls were jealous. So overall,Edward had not been a complete success with regards to gaining power over Godwine as he hadn’t managed to appoint all the positions to Normans and only got one up on Godwine when appointing archbishop as there was rivalry between the Earls. However, even though Edward had got one up on Godwine, Godwine was still responsible for the murder of his brother Alfred. Godwine had arrested Alfred and killed some of his followers, he was then taken out of Godwine’s hands and but on board a ship where soon afterwards he soon died.

In 1046, Godwin’s eldest son Sweyn abducted a nun and used her as a sex slave, when this was put to light he was sent into exile to Flaunders and Denmark and his land was shared between his brother Harold and his cousin Beorn. As Godwine was unable to prevent this, its shows how King Edward did have some power over him. However, in 1049 Sweyn returned in the hope of getting Beorn and Harold to help him regains the Kings trust, they refused to do this which eventually led in Sweyn killing Beorn. Again, he had committed a crime, but this was of international significance as Beorn was the Kings brother. This resulted in Sweyn being declared as nothing by King Edward and his counsellors, with his lands being handed to the Kings French nephew, Ralf of Mantes. Again in 1050, Sweyn returned back to England and was surprisingly pardoned by the King.

This shows that Edward was very naïve and vulnerable in respect with having to make decisions independently. The Godwine’s were an incredibly influential power in England, and Edwards actions show that he in unable to keep them out of power for very long. During Edwards reign, there was a big threat of England being invaded by the Scandinavians and Vikings. Some of these people had claims to the throne and wanted to take over the country and claim their positions. Swein had appealed for Edwards help however, Edward decided to adopt the “wait and see policy”. This policy was non-interventionist and meant that he didn’t get involved with other countries problems. In the end Harold Hardrada and Swein were fighting for supremacy in Scandinavia which meant they didn’t invade England.

This resulted in the Foreign policy being a success. England was benefited hugely as people were financially wealthier as they didn’t have to pay extra tax, also Edward was becoming more independent in his decisions with law and order as his decisions only seemed to have positive effects on the country; during Edwards reign, England was not invaded, staying out of the situation kept England safe. Edwards popularity soared with the public as they were saving money which benefitted their families. Another problem Edward had to overcome during his reign was the domestic policy. Edward had to decide how the country needed ruling and what the best policies were. If he chooses an unpopular and inappropriate policy the country would be in a disaster and he would receive even less support which he desperately needed as he was already in a weak position.

As the foreign policy was a great success, Edward was able to reform the domestic policy and abolished the yearly geld in 1051 which paid for 14 manned ships to be a permanent defence for the country, instead he made an agreement with the Cinque Ports, (these were Sandwich, Dover, Fordwich, Romney and Hythe). In emergencies these ports would supply manned warships to defend the country. This new policy meant that the public didn’t have to pay the geld but the Cinque Ports had to ensure that they were ready for an emergency. As a result the population became better off without having to pay the tax, therefore Edwards’s popularity dramatically increased putting him in a stronger position.

Edward took a massive gamble with reforming the domestic policy; it was both naïve and forward thinking. If England had been invaded in Edwards reign it would have had a devastating effect on the country. On the other hand Edward gained a lot more support from the public; this strengthened his position as a King. Edward had succeeded in relation to the foreign policy and the domestic policy. Overall, I think that Edward was a successful King although some of his decisions succeeded down to luck.

With regards to the powerful Earls, he was able to overcome this problem as he got many of his trusted Normans into key positions but because there were also power struggles between the Earls then in some decisions they supported him to degrade Godwine, so therefore they were not trusted and reliable allies to Kind Edward. Both the Foreign policy and the Domestic policy were a success, they gained support from the country but Edward was incredibly lucky that the country was not invaded during his reign. Edward was very forward thinking in his decisions, and did become a successful King even though in the first few years of his reign he faced many problems. 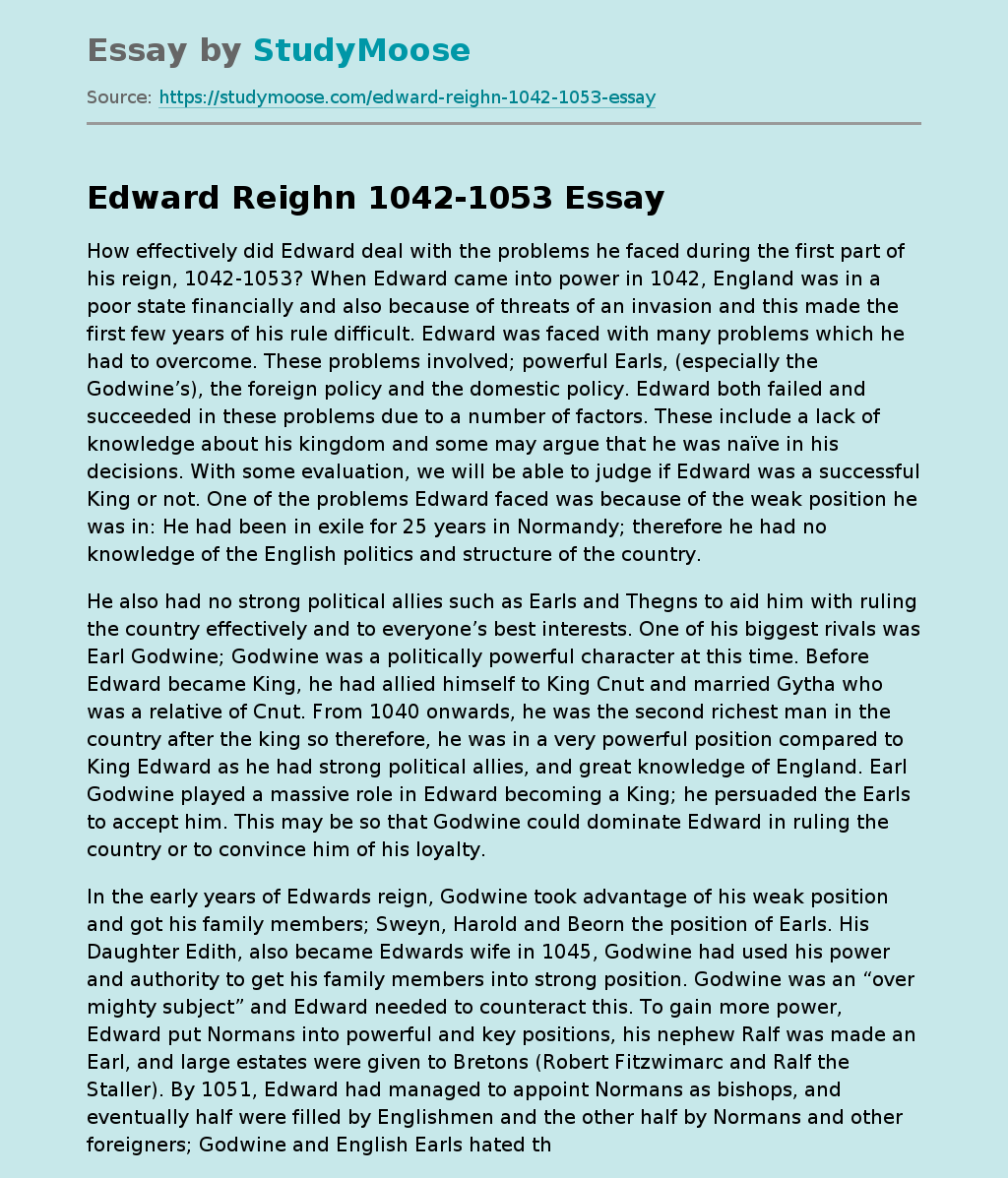