In the 1990s article, “Is Humanity Suicidal?”, Edward O. Wilson is concerned about the extinction of the human species.

He believes that humanity’s harsh treatment of Earth will soon have excruciating consequences. Wilson also states that the increasing industrial world is having a very consequential affect on the global environment and that it may be too much for it to handle. He insists that “the human species is an environmental abnormality,” because human’s negative impact on the earth is likely to threaten the survival of the human species.

Wilson asks “Who can safely measure the human capacity to overcome the perceived limits of the Earth?” The limits of the Earth’s natural resources and the Earth’s ability to sustain itself from humanity’s rough treatment is unknown. Wilson believes that there are two different perspectives for the future of the human species, which are exemptionalism and environmentalism.

There are people who fail to recognize environmental issues for what they really are.

These are the exemptionalists. They see these problems as very minor. Wilson believes that these people think that environmental problems will soon disappear with the growth and advancement of technology. He believes that these people are too caught up with their own lives and the present that they fail to think about what could be waiting for their ancestors in years to come.

Then there are the environmentalists, in which Wilson has a strong belief in. Wilson believes that humanity cannot remake in the Earth in its original form.

The increasing human efforts to remake the earth and control the global environment for human use is causing too much change in the environment that Earth soon my not be able to support the survival of the human race, therefore humanity’s intelligence can be somewhat of a weapon to there own survival.

Wilson asks if population growth and human control over the environment proves that “humanity is suicidal”. Wilson argues that we are not destined to destroy ourselves by trying to control the environment, so therefore we are not suicidal. He believes that humanity is “smart enough and have time enough to avoid an environmental catastrophe of civilization-threatening dimensions.” Wilson also holds the belief that in order to preserve our environment that we must realize that humans are not the only organisms in the ecosystem that helps keep the environment livable; every organism plays their part. With the constant reporting of the extinction of species because of our harsh treatment, the jobs that the different organisms have to our environment are now lost. He argues that the Earth is too complicated in order for one species to be bale to control it.

Wilson concludes that we have around 50 to 100 years to straighten out our environment and to develop different values and ways of thinking. If the human’s negative impact on the Earth increases it will result in the fall of our global, industrial civilization. 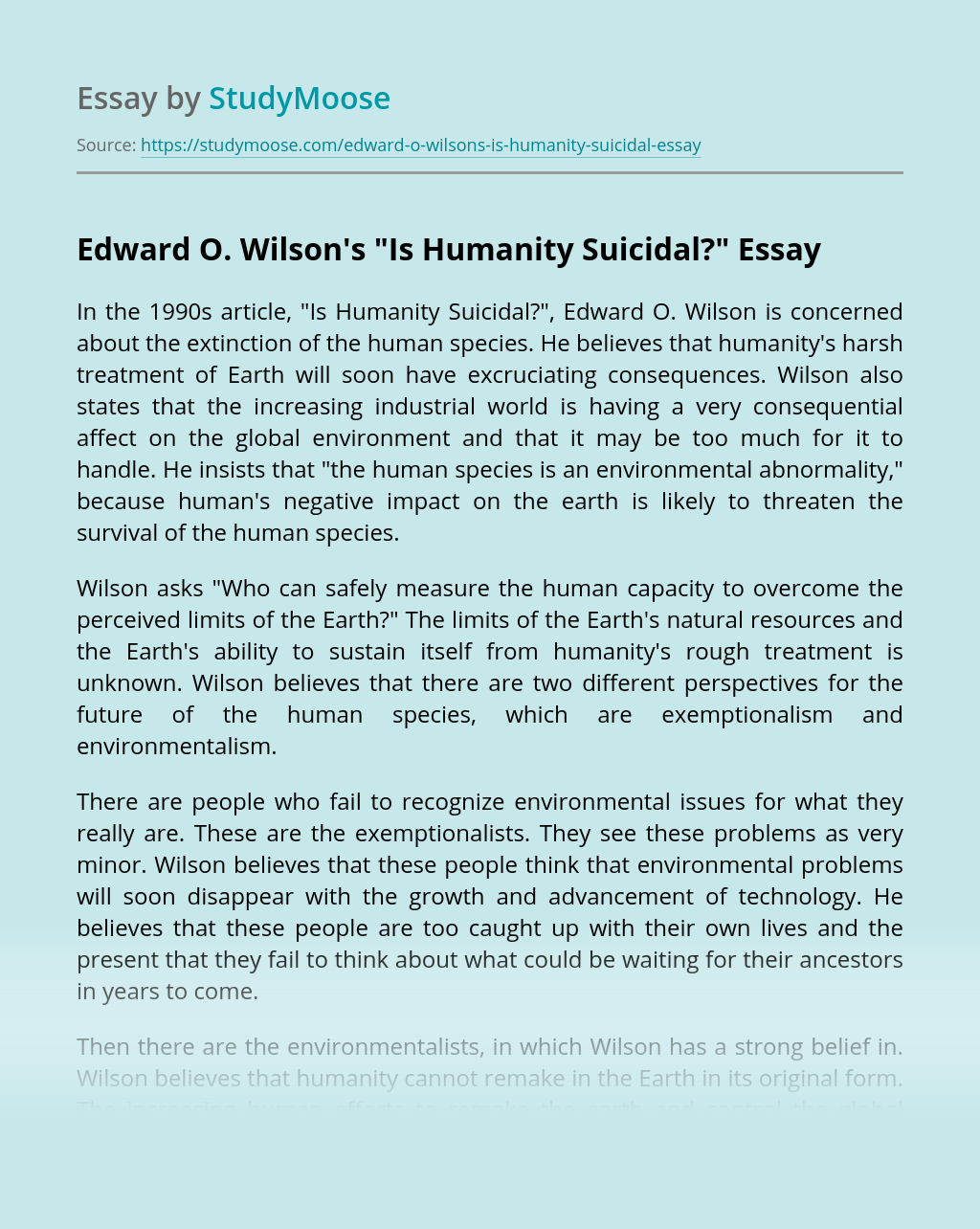