Edward Gibbon and the Decline and Fall of Roman Civilization

Gibbon comes up with this theory through the major experiences in life: beginning at his early childhood, with a frail and diseased body, to the youthful Gibbon under the constant oppression of a demanding father, to the experiences of his life on the grand tour. These things have helped form his worldview and caused him to create theories, and a seemingly emotional disdain for religion. All of these things have had a tie into influencing his works, and how he became the historian he is famous for today.

Don't use plagiarized sources. Get your custom essay on
“ Edward Gibbon and the Decline and Fall of Roman Civilization ”
Get custom paper
NEW! smart matching with writer

Gibbon was the eldest of six children and, as it turned out, was the only child to not die at infancy; thus, Gibbon was their only child. His mother was a “pretty and vivacious woman, and found little time for her son. ” The role of “mother” for Edward Gibbon was filled by his maiden aunt, Catherine Porten, who encouraged Edward’s “intellectual inclinations. ”[2] When Edward was born, he had a disease until the age of fifteen and his “puny constitution was afflicted with almost every species of disease and weakness.

[3] Due to these conditions, Gibbon spend most of his time at home in bed instead of at school;

Gibbon did not mind this because he hated school. [4] Due to his weak condition, Gibbon was “kept from the joyous play of his equals”[5]; his condition was the center of many taunts. Due to this childhood, Gibbon carried on a, “lifelong aversion to schools and doctors,” causing him to hold a negative view of all educational affiliations.

[6] When Gibbon was fifteen, his disorders suddenly vanished and his father enrolled him at Magdalen College in the town of Oxford.

Edward Gibbon and the Decline and Fall of Roman Civilization. (2018, Sep 18). Retrieved from https://studymoose.com/edward-gibbon-and-the-decline-and-fall-of-roman-civilization-essay 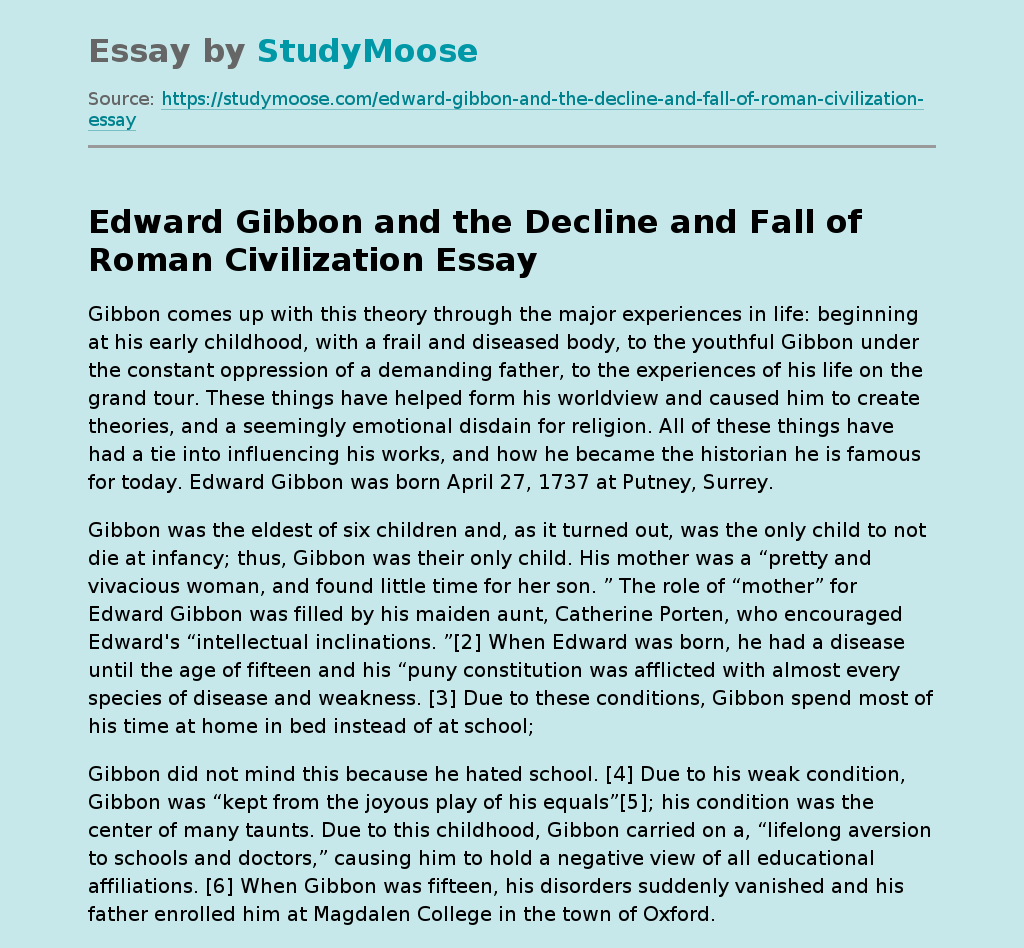