Edvard Munch The Scream and The Sick Child

Edvard Munch was born in Norway in 1863 and became a troubled artist after he was influenced by many older impressionists. Most of his work is a reflection of impressionism and tells a story that is mostly dark or consist of death, illness, anxiety, pain, or fear. His paintings also are influenced by the heartache he endured as a child watching close family members die from sickness that he survived, such as, his sister and his mother who both became ill and died of tuberculosis.

Don't use plagiarized sources. Get your custom essay on
“ Edvard Munch The Scream and The Sick Child ”
Get custom paper
NEW! smart matching with writer

The darkness continued to haunt him throughout his life and influenced his paintings as well which in turn, created a very famous artist of impressionism and symbolism. Most of his work symbolized troubles, anxiety, and a loss in someway shape or form to include death, or psychological problems such as anxiety.(Wolf,2009) Munch used paintings that signify demons and bad times rather than the happy times in peoples lives which was different and accepted.

One of Edvard Munch’s first and earliest paintings, sick child, is an early example of a painting that shows sadness, sickness, and possible death.

The painting is of a young girl, munch’s sister, laying in a bed straight up and hovered over by another grienving womanly figure who’s head is bowed as to only show us the top of her head. The girl looks vaguely pale with bright red long uncombed hair and a blank stare on her face. The girl is staring at a dark wall that could signify death.

The women hovered over her signifies grievance and pain seeing how she is not directly looking at the girl but rather sad and depressed. Hands are not drawn in the painting but an interlocking of shapes used to signify that joining of hands is greatly illustrated, perhaps, to indicate the woman at the bedside as being her mother who dies 11 years earlier. The painting of his sister who died at the age of 15 and his mother who died of the same disease a decade earlier is an obsessive painting that took Munch 6 different tries to master exactly the way he wanted it to be.

Each version was different in different ways and told the similar story. His first version of the painting was a black and white lithograph with similar thick vertical and horizontal brushstrokes as see in the paintings he did after the first. However, each new version of The sick child, adds more story and elements in order to further depict such a dark and haunting time. Munch used dark colors and rough brushstrokes of impasto paint in his painting depicting a sadness and hard time in his life.(Esaak,2012) Happiness is not in any part of this painting and melancholic tones are also used and presented throughout, as well as, scratched surfaces made to look weathered and torn. The lithograph painting was first painting in white and black and later was changed and painted with dark and more intense colors and with more impressionism which was popular in that time and therefore was a blend of both lithograph and impressionism. (Esaak,2012) Another famous work of art done by Edvard Munch is, The Scream.

Again Munch used free,loose, and vertical brushstrokes and paints with dark intense colors. The use of semi-abstraction is also present throughout this painting. Munch used fauvism, expressionism, and surrealism in this painting. The painting definitely depicts a distoration of reality throughout. The girl in the pictures face is distorted as well as the bridge and sky around her which leaves the work to personal vision when analyzing it. Munch was influenced to paint The Scream after walking with his friends at sundown and was frightened by a terrible scream and therefore, the picture is a symbol of his fear deep inside himself. The figure with an odd shaped cartoon head, comparable to an alien, has their hands to their agonizing face as if screaming themselves in fear and the world around them seems to stop as the sky in the background looks horrifying and portrays violence.(Welford,2002)

The sky is shown in red and yellow colors and the sea below is shown with the use of dark blue, greens, and black. Nature represents the swirling of the sky and the sea and the swirling represents the irony of horror. As his friends walk on not feeling the same fear as the artist, shows that the fear inside peoples heads do not affect everyone. Therefore, the irony of this painting proves that fact that only certain people will relate to what the artist is trying to portray which is fear and anxiety within ones self. The scream itself is portraying the release of tension and fear that one feels from living with the anxiety and fears.(Welford,2002)

The painting also depicts the sudden onset of anxiety and fear that can come on at any given time which affects some people in crowded places or just walking along on the bridge as in this painting. The noises and screams that the artist fears is not feared or heard by others around him and therefore, not everyone can understand the fear. Edvard Munch was an excellent antinaturalist impressionist artist who used realistic views in order to capture the views of his audience. His paintings incorporate the sorrow and heartache that most humans feel as some part in their lives, others more than some.

Other paintings depict the anguish of facing the demons inside when it comes to psychological problems, as well as fear and anxiety and some viewers can relate to the artists work and how he used detailed paintings to show his point of view on the subject. He used subjective content and realism to show disparity, and darkness, as well as surrealism. People were also a large part of his paintings as well as nature when trying to convey his message like he did in The sick child, and The scream.

Edvard Munch The Scream and The Sick Child. (2017, Feb 14). Retrieved from https://studymoose.com/edvard-munch-the-scream-and-the-sick-child-essay 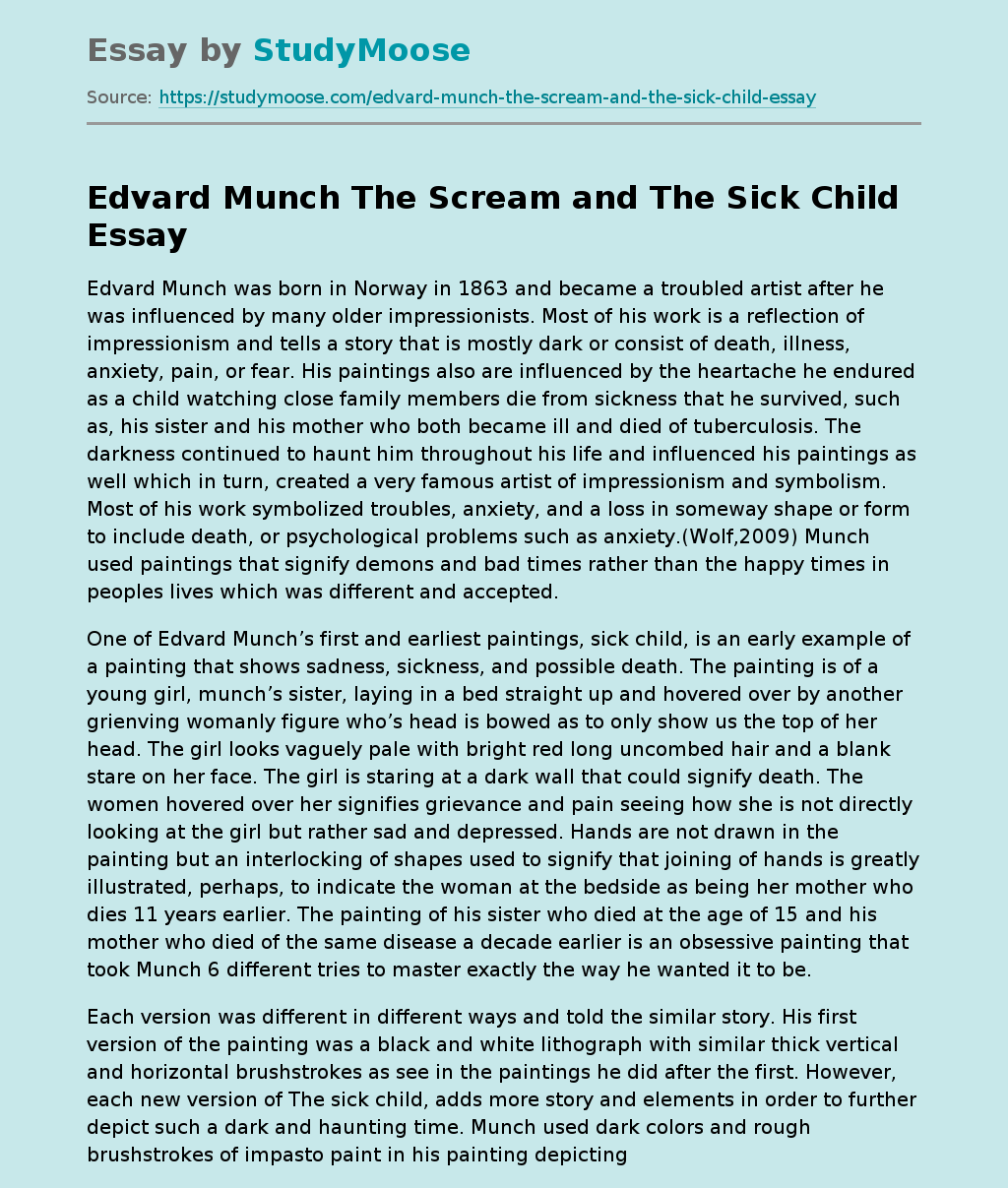