All through history of America education has served very crucially in both the political and economic needs. The goals of education in America include: all children have access toll start school ready to learn, 90 percent increase in High school graduates, development of graduates who demonstrate competency in various areas, create a lead in mathematics and science achievement in the world, literacy among all the adults and possession of the knowledge and skills essential to strive in a global economy and exercise the rights and duties of citizenship, schools free of substance abuse, and full of discipline, access to professional equipping programs and lastly promotion of partnerships in schools that will intensify the parental participation in the whole dimension of the children .

Turn in your highest-quality paper
Get a qualified writer to help you with
“ Educational Inequality ”
Get high-quality paper
NEW! AI matching with writers

The US established an Act of Parliament in 2001 known as The No Child Left Behind (NCLB) that aims at bringing reforms in the education system. It aims in maintaining high standards and strategies in order to improve education system and eliminate the educational inequality.

Education dates many eras back in history and quite surprisingly so do education inequality. Educational inequality refers to the nonexistence of equal chances that individuals have as a result of differences in quality education among other factors. Generally in America and the entire world a variety of educational inequalities exist. The imbalances continue along socioeconomic and cultural lines. Research shows that slightly in the across the world more than one billion adults illiterate. The United Nations indicates that of these one billion uneducated grown-ups more than 2/3rds are women.

Further it shows that the fourth grade learners who grow up in lesser, low-income societies are already about three grade levels behind their peers in high-income societies (TFA, 2008). By the time these students are 18 they have not yet completed in their high school, with only a ratio of one is to ten. These educational imbalances dishonorably limit the life scenarios of the children who grow up in poor societies who are over 13 million children.

The disparities incline inexplicably affect minority groups comprising African-American, Latino/Hispanic, and Native American children, who are three times as probable to live in low-income regions (TFA, 2008). Children in low-income societies and areas in the world regularly face trials such as underprivileged healthcare, nourishment, and insufficient housing. While their counterparts enjoy concerted cultivation, exposure to the information and resources, better nutrition and recreation facilities all of which are important in better performance. Schools and school systems time and again lack the same resources to encounter and cope with the students’ full potential. Various factors are precursors of inequality, and on the other hand education inequality becomes a factor in propagation of the factors themselves, these include economic, social, political, technological and cultural influences and the education system, delivery of education etc.

The factors can either be endogenous or exogenous: either external or factors within the education system itself that cause inequality: nonexistence of schooling facilities, poor administrative environment of the school-system. Absenteeism, truancy, low attainment in school and dropouts are several of the outcomes of pitiable structural environment of school-system. Segregation has been named as the greatest cause of inequality. Segregation actually means stratification or classification of people in a society due to a predominant attribute they possess. Racial, gender, social, economic segregation among others have an adverse effect on education. The discrimination that arises hinders people from accessing better and desired education.

In the history of America the inequality of education has existed in regard to race, gender and sociocultural and economic factors. Through the transitory of slavery, equality of education was one of the rights that were formerly withdrawn from the Black people. The grant of equality was a factor that would help in social integration attainment. Its over one hundred and twenty years but still the black children have not really achieved the amount of financial success White children have in life after school. The objective of education is to reserve the present class structure. Ever since the eradication of servitude, racist whites have used the educational classification to retain their sovereignties and to preserve blacks unfortunate. Philosophies of marginal subservience are spread, and the misrepresented fall into the trap of believing that race defines astuteness, by means of lopsided test statistics to aid back their thoughts.

Ranking in social achievement simulations adopt social movement in an exposed challenge, based on distinction as measured by years of schooling and practical capability. This open challenge assumes an identical rudimentary education. The Supreme Court governed that “separate but equal” schools were unauthorized, those who would avert incorporation had to find new methods to negate this elementary education. This is so equivalent to tracking where by children are separated in terms of their social classes.

Various sociological schools of thoughts have arisen to explain this phenomenon. Some of the dominant include the functionalist theory; this paradigm aims in delineating the functions of education and asserts that education serves the requirements of the society. In its manifest form education communicates elementary knowledge and skills across generations and on the other hand it socializes people into the society’s mainstream through its latent aims: the “moral education,” which helped forms a more-cohesive social arrangement by bringing together people from assorted backgrounds. It echoes the historical apprehension of “Americanizing” settlers. This theory was formulated by Emile Durkheim and has since been advanced by other scholars.

Functionalists argue that other underlying roles of education are such as transmission of core values and social control. Functionalist hold that education serves the purpose of socializing individuals to learn the social norms, beliefs, knowledge, attitudes and values that they will require as industrious citizens at the different (unequal) levels of society this is achieved mainly through “the hidden curriculum”, at the same time education sorts and rank persons for engagement in the labor market, individuals who achievement highly are trained for the most important jobs and in recompense, earn very high incomes. Thereby the most capable individuals get the greatly aspired occupations. The sensibly constructed educational goals and curriculum assists in develop identities and self-esteem. However, Sennet and Cobb (2005) cites that to have confidence that aptitude single-handedly determines who is to be rewarded is unfounded. Meighan concurs, adding that a majority of individuals who are capable of performing but are limited by their working class background fail to achieve the status they deserve limited by the cultural experiences and deprivations.

The cycle persists with schooling backing continuity, which in turn maintains social order. Lucas, 2009 supposed that this progression, whereby some schoolchildren were named and labeled educational failures, is an essential activity which education as a part of the social system, performed for the whole and smooth functioning of the society. Another model called the conflict theory maintains that the function of education is to continue with the social inequality and maintain the power of the powerful in the society. Conflict theorists scrutinize the identical purposes of education as functionalists. However the functionalists view education inequality as a advantageous contribution to an ordered society and that helps maintains the social order while the conflict theorists perspective is that the educational system is a system that propagates the status quo by stultifying the lower classes into being submissive workers. They together concur that the educational system practices sorting, but they disagree about how it enacts that sorting. Functionalist’s prerogative that schools categorize centered upon distinction; conflict theorists contend that schools classify along distinctive class and ethnic lines.

Conflict theorists hold that, schools train those in the working classes to accept their position as a lower-class member of society. The conflicts identify several factors to defend their position: property taxes finance most schools this therefore means affluent districts have more money hence better funded schools. They can have enough money to pay greater wages, appealing to more professional teachers, and newer texts books and more technology. This therefore translates to better performance and development of more able students. Symbolic interactionists is yet another theoretical approach in explaining education inequality, symbolic interactionists say that society is conceivable since people have the capability to converse with one another by means of symbols. Further they add that people act toward others, objects, and events on the foundation of the connotations we convey to them. Subsequently, we experience and understand the world as a constructed- created reality. On education they restrict their examination to what we directly observe happening in the schools. Additionally they lay a focus on how educators anticipations stimulates student performance, observations, and attitudes.

Additionally researchers across the globe have come up with more theoretical methodologies to elucidate developments in educational inequality: the theory of industrialization, reproduction theories, MMI and EMI. theory of industrialization give its explanations on educational inequality that with increase with industrialization and modernization there would be decline in inequality in the education sector and as a result other sectors e.g. income distribution and resource allocation. As an outcome of economic, institutional, and cultural transformation, arising from improved technology and innovations, greater sections of the countries inhabitants will benefit, thereby reducing the factors that increase inequality. The theory asserts that access to education, and their educational achievement would be progressively rely on merit rather than cultural and economic background. Reproduction theories state that the inequality is a making of the education system; this can be simply inferred to mean that the systems are structured to reproduce the unequal social structure. Stratification in the society will continue even if the education enlarges because the powerful figures will continue to make strategies that maintain this benefit. Therefore there will forever be an intergenerational sinuousness of inequality.

Maximally maintained inequality (MMI) cites the educational system expansion doesn’t specifically major on lower class but all the students, this theory was formulated in an attempt to answer why educational development and egalitarian transformations do not decrease educational disparity among socioeconomic divisions. Relative risk aversion (RRA) proposes larger disparity lessening is probable and is subject to altering costs and customs. Effectively maintained inequality (EMI) proposes that significant inequality decrease in equality is indescribable since qualitatively diverse categories of education preserve far-reaching inequality, even at collective conversions. When inundation is attained at a specific level and inequity in realization degenerates, quantifiable inequity may be swapped by qualitative. This means that upper classes will be better equipped. Concentrating on tracking, EMI openly deliberates the established administration of diverse educational systems, thus accentuating the importance of including the institutional facet.

Theorists and researchers agree that the inequality in education is as a result of segregation and class differences more specifically brought about by income-economic factors. If the bridge in student achievement is to be crossed policies that emphasize inequality elimination and new initiatives have to be developed. The structure and the process of schooling should also be taken into consideration to achieve better performance. Reduction of race and sociocultural discrimination also will go a long way in improving the state of education in America. The state commitment to policies that ensure equal distribution of the resources and inception of programs that are aimed at improving the welfare of the people should be adopted. 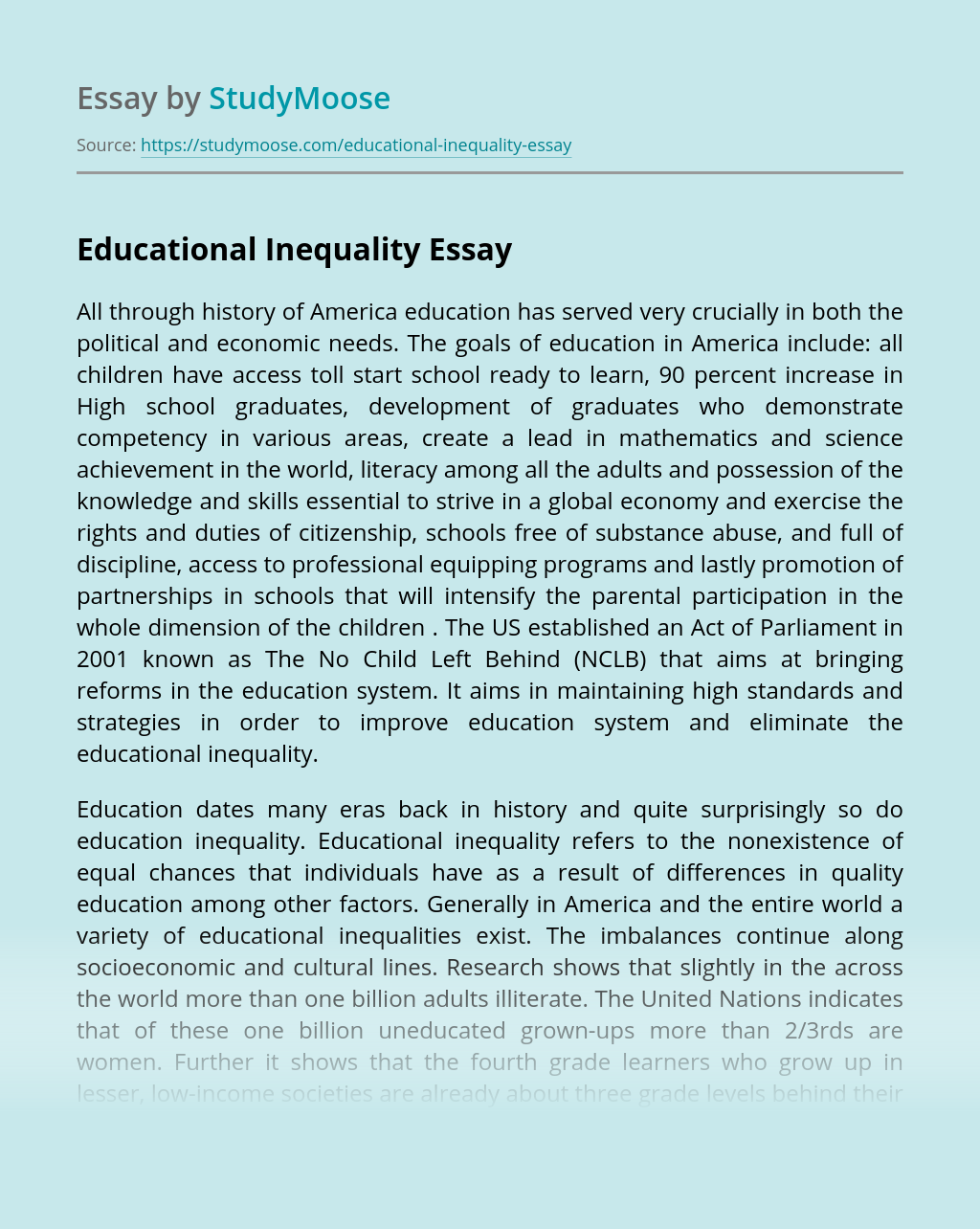 Turn in your highest-quality paper
Get a qualified writer to help you with
“ Educational Inequality ”
Get high-quality paper
Helping students since 2015
Stay Safe, Stay Original