The education of Shelby Knox was a complete mind-blower for me. The video follows young Shelby Knox, from Lubbock, Texas, as she aspires to get sex education into schools in Lubbock. This town preaches abstinence, and the town’s people appear to be incredibly ignorant. Ignorant may be an understatement . The teen pregnancy rates here are twice the national average, as are the sexual transmitted disease rates. They don’t believe in teaching sex education because the town’s people believe very strongly in the idea that sex isn’t permitted until marriage.

Don't use plagiarized sources. Get your custom essay on
“ Education of Shelby Knox ”
Get custom paper
NEW! smart matching with writer

Shelby’s fight goes for naught as the town holds their ground.

The video also shows Shelby’s unique relationship with her parent’s, and the resistance they even have with her and her fight for sex education in schools. The film also touches on gays and their fight for equal rights within the schools. Lubbock , Texas is a place I would never like to visit. The people there seem to be living in the 1800’s still.

Shelby and the youth commission were fighting for a very good cause. Sex education is very important. It can teach the rewards, dangers, and consequences of having sex. As the old saying goes, knowledge is strength.

If these kids don’t have the knowledge, how can they ever be expected to make smart decisions? Based on the bible and their commitment to the church? It is absolutely ridiculous that religion is even mentioned when this topic comes up. The town, as mentioned above, has earned twice the national average for teen pregnancy and std rates.

The church angle clearly isn’t working. I agree with Shelby’s fight, it is very courageous of her. I disagree with the towns council, the residents , and the school boards stance on the issue. I do believe this film covered all perspectives and issues at hand.

No, Shelby Knox’s fight didn’t turn out the way one would have hoped, but it did enlighten every viewer to the fact that Lubbock, Texas and the vast majority of their residents are incredibly naiive. I do not like the religious views, on the subject, shared by the vast majority of the people in this film. Religion should not even be mentioned when the issue of sex education in public schools comes up. Shelby maybe should have spoke up on that issue a little more. Coming from a family that has never preached religion, I never really realized how crazy some people can be over t. It all makes no sense to me. The video was about sex education.

Religion has to be tied into it for whatever reason. I don’t understand the downside to teaching our countries teenagers the dangers and consequences of sex. It is in our nature to have sex. Suppressing teenagers from knowledge and their sexual urges based on religion is a complete joke. I learned that religion shouldn’t even be mentioned when it comes to such issues. I also learned that Mr. Ainsworth is a crazy person, and I need to keep my future kids as far away from that guy as possible.

The society we live in today needs to wake up, and stop basing important decisions on religious beliefs. This video ties directly into all of our course material. Sex is a huge part of life, for all of us, beginning with puberty. America’s teenagers need to be educated on every aspect of sex and its consequences. As std rates, teen pregnancy rates and overall teenage sex rates continue to climb, it is more important than ever to educate them. This class, Psych 240, should literally be installed into every high school across the country. Teaching about every aspect of sex can only be beneficial to our country. 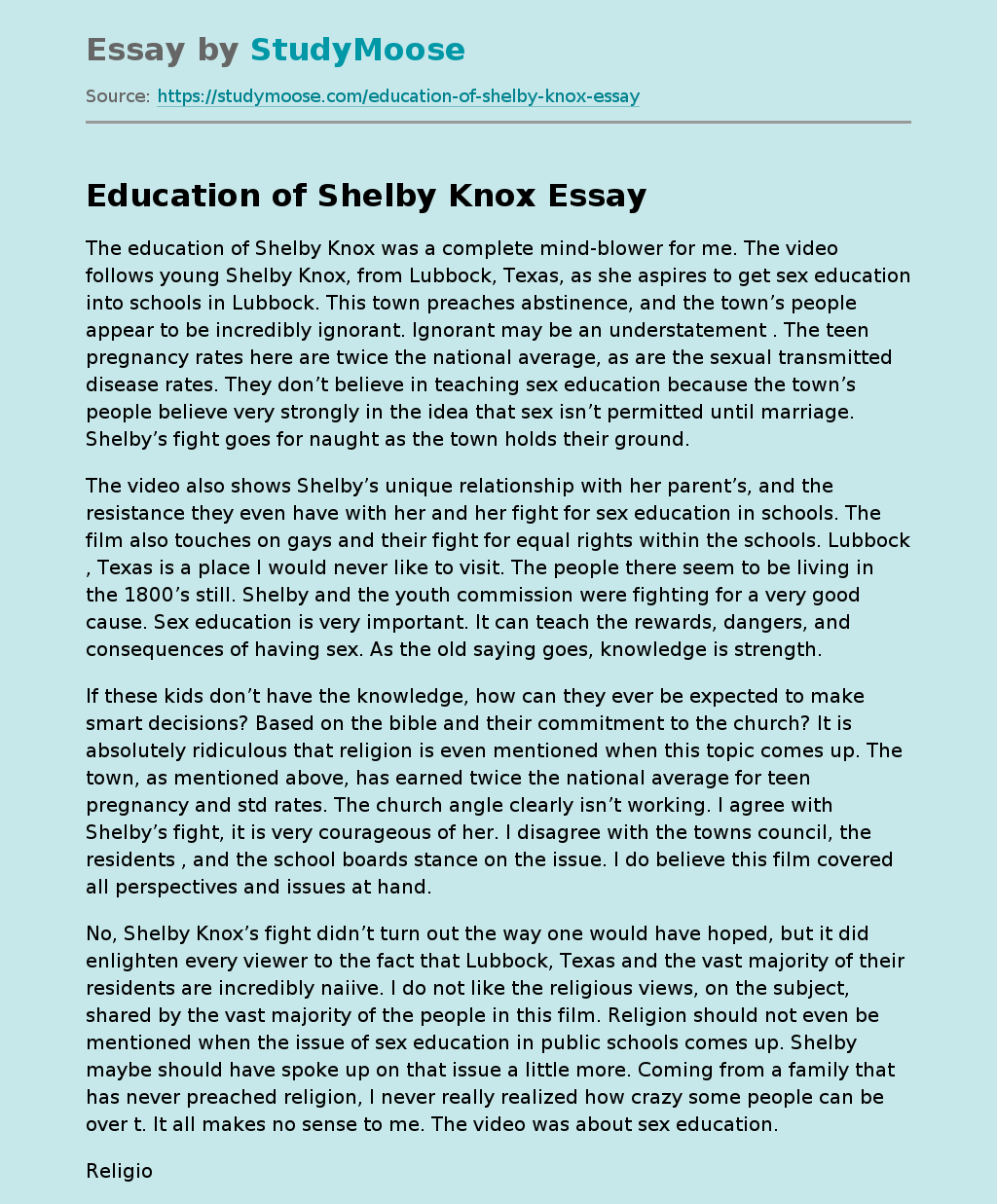