Education in the Philippines

During the period of colonization by the United States, Education in the Philippines changed radically, modeled on the system of Education in the United States of the time. After theSecond World War, changes in the US system were no longer automatically reflected in the Philippines, which has since moved in various directions of its own. Filipino children may enter public school at about age four, starting from Nursery up to Kindergarten. At about seven years of age, children enter elementary school (6 to 7 years).

Don't use plagiarized sources.
Get Your Custom Essay on Education in the Philippines Just from $13,9/Page

This may be followed by secondary school (4 years).

Students may then sit for College Entrance Examinations (CEE), after which they may enter tertiary institutions (3 to 5 years). Other types of schools do exist, such as Private schools, Preparatory schools, International schools, Laboratory High Schools and Science High Schools. Several ethnic groups, includingChinese, British, Americans, and Japanese operate their own schools. Elementary schooling is compulsory, but 24% of Filipinos of the relevant age group do not attend, usually due to absence of any school in their area, education being offered in foreign languages only, or financial distress.

In July 2009 DepEd acted to overcome the foreign language problem by ordering all elementary schools to move towards mother-tongue based learning initially. The order allows two alternative three-year bridging plans. Depending on the bridging plan adopted, the Filipino and English languages are to be phased in as the language of instruction for other subjects beginning in the third and fourth grades Secondary schooling is of four years duration only.

Although secondary schooling is compulsory, some Philippine news media have reported that since the 2000s, many Filipino students who began studying at private high schools, are forced to transfer to public high schools because of increasing cost of living and private school fees and financial distress. Many public elementary/high schools in the country are already overcrowded. The school year in the Philippines starts in June of one year and ends in March of the next, with a two-month summer break for April and May, one week of semestral break (the last week of October), and a week or two of Christmas break.

History and development Earlier times Further information: Ancient Philippine scripts In pre-Spanish times, education was informal unstructured in some areas. Children were provided more vocational training and less academics (3 Rs) by their parents and in the houses of tribal tutors. When the Spanish arrived in Manila, though, they were surprised to find a population with a literacy rate using a system of writing known as baybayin which was higher than the literacy rate of Madrid. Spanish period Main article: Philippines education during Spanish rule

Under the Spanish, education indigenous population was initially left to religious orders, with primary education being overseen by parish friars who generally tolerated the teaching of only religious topics. The friars, recognizing the value of a literate indigenous population, built printing presses to product material in Bambayin. The friars, generally poorly educated themselves, were especially hostile to local population, termed indios learning to speak and read Spanish, which would have made available access to the same body of knowledge the friars had.

Secular education was completely neglected; with only one public primary school operating in Manila as late as 1830. A 1714 royal decree creating secular universities was never implemented. A 1702 decree creating seminaries for natives was implemented only in 1772. Access to education by the Filipinos was later liberalized through the enactment of the Educational Decree of 1863 which provided for the establishment of at least one primary school for boys and girls in each town under the responsibility of the municipal government; and the establishment of a normal school for male teachers under the supervision of the Jesuits.

The defeat of Spain by American forces paved the way for Aguinaldo’s Republic under a Revolutionary Government. The schools maintained by Spain for more than three centuries were closed for the time being but were reopened on August 29, 1898 by the Secretary of Interior. The Burgos Institute in Malolos, the Military Academy of Malolos, and the Literary University of the Philippines were established. A system of free and compulsory elementary education was established by the Malolos Constitution. American period Main article: Philippines education during American rule.

Further information: Thomasites An adequate secularized and free public school system was established during the first decade of American rule upon the recommendation of the Schurman Commission. Free primary instruction that trained the people for the duties of citizenship and avocation was enforced by the Taft Commission per instructions of President William McKinley. Chaplains and non-commissioned officers were assigned to teach using English as the medium of instruction. A highly centralized public school system was installed in 1901 by the Philippine Commission by virtue of Act No.

The high school system supported by provincial governments, special educational institutions, school of arts and trades, an agricultural school, and commerce and marine institutes were established in 1902 by the Philippine Commission. In 1908, the Philippine Legislature approved Act No. 1870 which created theUniversity of the Philippines. The Reorganization Act of 1916 provided the Filipinization of all department secretaries except the Secretary of Public Instruction. Two decades later, enrollment in elementary schools was about 1 million from a total of 150,000 students in 1901.

The 1973 Constitution set out the three fundamental aims of education in the Philippines, to: ? foster love of country; ?teach the duties of citizenship; and ?develop moral character, self discipline, and scientific, technological and vocational efficiency. On 24 September 1972, by PD No 1, the Department of Education, Culture and Sports was decentralized with decision-making shared among thirteen regional offices. In 1978, by PD No 1397, the Department of Education and Culture became the Ministry of Education and Culture.

The Education Act of 1982 provided for an integrated system of education covering both formal and nonformal education at all levels. Section 29 of the Act sought to upgrade education institutions’ standards to achieve quality education, through voluntary accreditation for schools, colleges, and universities. Sections 16 & 17 upgraded the obligations and qualifications required for teachers and administrators. Section 41 provided for government financial assistance to private schools.

On 26 May 1988 Congress enacted Republic Act 6655, the Free Public Secondary Education Act of 1988, which manndated free public secondary education commencing in the school year 1988-1989. On 26 May 1988 Congress enacted RA 6655 which made free public secondary education to become a reality. On 3 February 1992, Congress enacted Republic Act 7323, which provided that students aged 15 to 25 may be employed during summer or Christmas vacation with a salary not lower than the minimum wage. 60% of the wage is to be paid by the employer and 40% by the government.

On 3 February 1992, Congress enacted RA 7323 which provided that students aged 15 to 25 may be employed during summer or Christmas vacation with a salary not lower than the minimum wage. 60% of the wage is to be paid by the employer and 40% by the government. The Congressional Commission on Education (EDCOM) report of 1991 recommended the division of DECS into three parts. On 18 May 1994, Congress passed Republic Act 7722, the Higher Education Act of 1994, creating the Commission on Higher Education (CHED), which assumed the functions of the Bureau of Higher Education, and supervises tertiary degree programs.

On 25 August 1994, Congress passed Republic Act 7796, the Technical Education and Skills Development Act of 1994, creating the Technical Education and Skills Development Authority (TESDA), which absorbed the Bureau of Technical-Vocational Education plus the National Manpower and Youth Council, and supervises non-degree technical-vocational programs. [17] DECS retained responsibility for all elementary and secondary education. This threefold division became known as the trifocal system of education in the Philippines. The trifocal education system of the Philippines.

In August 2001, Republic Act 9155, otherwise called the Governance of Basic Education Act, was passed transforming the name of the Department of Education, Culture and Sports (DECS) to the Department of Education (DepEd) and redefining the role of field offices (regional offices, division offices, district offices and schools). RA 9155 provides the overall framework for (i) school head empowerment by strengthening their leadership roles and (ii) school-based management within the context of transparency and local accountability.

The goal of basic education is to provide the school age population and young adults with skills, knowledge, and values to become caring, self-reliant, productive and patriotic citizens. [8] In January 2009, DepEd signed a memorandum of agreement with the United States Agency for International Development to seal $86 million assistance to Philippine education, particularly the access to quality education in the Autonomous Region in Muslim Mindanao (ARMM), and the Western and Central Mindanao regions.

Education in the Philippines. (2016, Oct 15). Retrieved from https://studymoose.com/education-in-the-philippines-4-essay 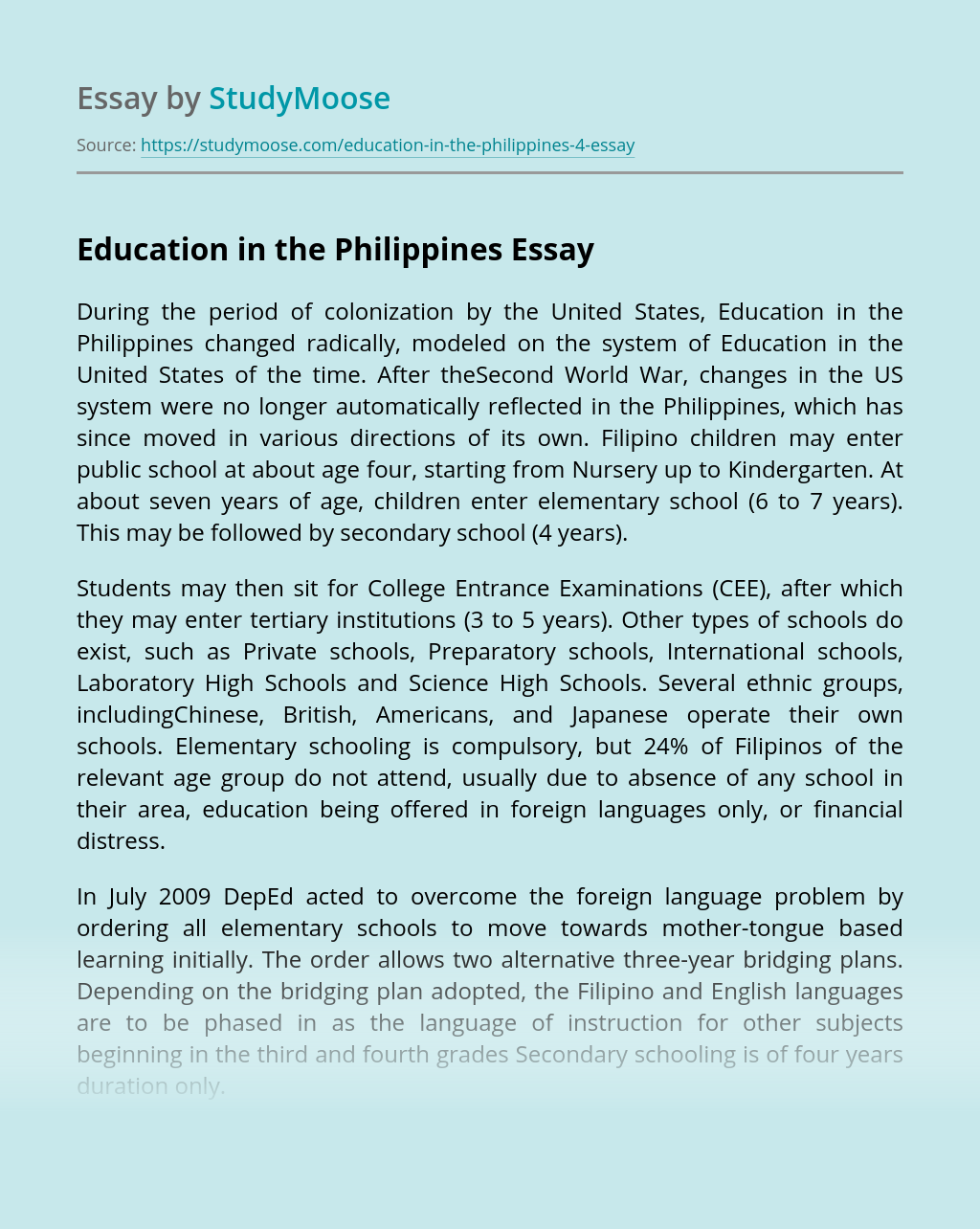 Learning involves you taking in the world around you and connecting to what you are experiencing. It then requires that you make sense of the experience- that you come to an understanding of it. Learning also involves using your critical thinking skills and sound judgement to respond appropriately to any workplace task, online assignment, or...

Throughout the years, organisations have actually evolved to include customer views in their practices. As an outcome, consumer power has actually ended up being an influential force that directs organizational techniques towards ethical practices. Based upon the formerly mentioned view, an assessment of Item red’s strategy offers insight on its strengths, weaknesses, and enhancements. Item...

Academic dishonesty is a vice that is plaguing higher education in today’s society. While lecturers and exam invigilators always seem to be a step behind in catching the culprits, the techniques being invented by the students to beat the system can almost be viewed with grim fascination. The emphasis that has been put on higher...

I am Fifi Azmi, student of Diploma in Quantity Surveying, Mara University of Technology Malaysia. I was attended this course since June 2010 and will end my studies on April 2013. Through this third years of studies in this field, my passion and enthusiasm to succeed in this course are highly prove in my good...