Education is one of the most important things for a society to prosper and be safe which forms the character and intelligence of the individuals around the world.

Don't use plagiarized sources. Get your custom essay on
“ Education For All ”
Get custom paper
NEW! smart matching with writer

Education makes one able to understand what is happening in the world logically and clearly. Education enables individuals to put their potential to use and make a difference in the future. It is essential for individuals to be educated in a way that they will expand their knowledge vastly. There is so many reasons and so many ways that education can benefit people all around the world. It is stated that schooling for 1 year can increase one person’s income up to 10%, and that is only with 1 year of education!

The Importance of Education

Education also teaches people female rights that are often ignored in poorer parts of the world because they have a different view of women. With education women will know their own rights and stand up for themselves instead of doing nothing. Having education for all people around the world is very important because it is the tool to combat poverty.

Education will surely decrease poverty all around the world if there was education for everyone, that is not just my opinion, there are so many facts that prove that education will help people in need.

6 Goals That Are Related to Education for All

The goals will also push for learning life skills for everyone so that more people will be more willing to learn. Increasing adult literacy is also part of the agenda in the education for all goals. Improving the quality of education is one of the aims because there is no use having education for everyone if the quality of education is really low. I think that these goals are all really good goals to follow and if all the government stick to the goals and all the goals get achieved, there will be no more poverty because of education! National/Regional In China, Shanghai tried to give more access to all students and more support for students that are failing or finding education hard.

Shanghai aims to reduce the work that students have to do so that they can do better a school environment, and also create better preschool education to make sure students will do better in primary school. This goal is set to be reached at 2020. Most of the children that aren’t doing well in school are children of people who are migrant workers who didn’t have public education before. It is estimated that around 20% of students are the children of people that are migrant workers. Educational achievement is one thing China really cares about.

Contrary to other countries in China, Shanghai realizes that minority students get good education too so Shanghai now has a policy letting migrant student attend public schools with other Shanghai children. There is a system that basically where a special type of school that has more sources than other schools and they accept less students, these schools are called “key schools”. This system is really outdated and it is less popular now. Shanghai removed this system because it promoted education inequality and made a policy where students had to attend their local school so it will be more equal.

In Hong Kong, they have rules that promote education for all so that everyone will be equal and no races will be left out just because of their race. In Hong Kong, schools can’t discriminate against your race by refusing to take in your child, or admitting your child in worse terms. They cannot deny access of any benefits, facilities or services that they give to other students. It is also against the law for any school, teacher or students to harass other children because of their race. There are 6 kind of schools in Hong Kong. Government schools, Aided schools, DSS Schools (Direct Subsidy School), Private schools, ESF (English Foundation School), International School.

The government, DSS and aided schools use a local curriculum while the other schools use curriculums based on themselves and what they believe in so this can vary a lot depending on the school. The government has a 6 year primary education plan that means you have to attend primary education for 6 years that is a necessity but it can be free if you are attending government schools or aided schools because those schools are funded by the government and not by any private owners. Personal Perspectives.

I think that education for all is very important. There are social benefits from having education. There has been stats surveyed that people who have received college education have generally longer lives and will take better care of themselves. The people who receive education will have more self esteem and will be more satisfied with themselves. The people with good education will also be better at solving day to day problems that will make his life much more easier on a daily basis.

Educational should be for both genders equally because Education should also be for everyone, it is also more important for females because the education that the women received has more of an effect on her family and their generations. It doesnt only help herself, she also helps her family. That is why educating women is a good way and a first step to solving poverty on a global scale.

There has been research done that married women will have smaller and healthier families. Educated women know the significance of health care and how to get it for her and her family. Education also helps women be more confident about herself and know that she has equal rights and both genders are equal.

Education of parents are also linked to the education that their children are gonna receive and mothers is more influential than the fathers so mothers education is important. Educated women are likely to have less mistimed birth and unwanted babies so they will be prepared when they actually decide to have a baby. Education are being received by both genders now because equality of both genders are being recognized as important. Being education gender equal is one of the goals of the millennium development goals that is due in 2015. There are groups like UNFPA that advocate for universal education.

They help try to make education more equal in more underdeveloped countries so more countries understand the importance of reducing the gender inequality gap. Future Scenarios and Possible Courses of Action I think that the governments all around the world need to prioritize education for all and bring it higher on their to do lists because it is easily one of the most important things to achieve and it will so many problems on earth. We should also make sure that there will be less sexism in this world because in the poorer areas, women are considered less equal than men.

If a family had a daughter and a son, and could only afford education for one, they will choose the boy because they think the girl is flawed compared to the boy. There should be more policies that empower women and make them more important because right now, people are sexist and still think that men is better than women even though its not true and there are information that suggests women can help solve poverty if more women get educated. I think that the governments in poorer places need to set up more event that promotes education so that everyone knows how important education is so they will emphasize on education for their children.

The government should host events to get people to endorse and embrace education so children will want to go to school and work hard. I think there should be cheaper transport in poorer places so that children can get to school much more easily and in a cheaper way so the price of transportation won’t deter them away from going to school. Young people who received formal education should teach people around them so he can spread education to more people. I also think that the more developed countries should use some of their money to fund some organisations that help the less developed countries build schools and education so more people will have proper education because everyone has the right of education and education is considered a basic human right for a long time.

Personal Response I think education is really important because education also plays an important role in reducing world hunger. Child malnutrition is one of the highest death causing problem there is in underdeveloped countries. It is estimated that about 1 billion people do not have access to proper nutrition that is needed to have a healthy life. One of the most important factors of reducing world hunger is educating women, which is even more effective than directly giving them food. In Bangladesh, if a mother is illiterate, there is a higher chance that her child will be malnourished.

Education can help increase food production in countries by giving people the knowledge they need to produce more food and also to increase their knowledge about health. There are studies that show that education directly correlates with food security. In Bangladesh, as women with higher forms of education, there is a much lower chance that they have malnourished children.

Research also shows that people with higher forms of education can produce more foods than ordinary farmers with no knowledge because they might adapt smart strategies that can help produce more food than farmers that use the same strategies over and over again. Only few years of primary education can already boost a farmers output by 9%. In saharan africa, investing in educating women can potentially boost the output of the food by about 25% which is a really higher number. AIDS/HIV is a really huge problem in still developing countries and one of the most important ways of preventing or help reduce the number of AIDS/HIV is education.

According to the global campaign for education, “If all children received a complete primary education, the economic impact of HIV/AIDS could be greatly reduced and around 700,000 cases of HIV in young adults could be prevented each year, seven million in a decade” That just shows that education is key to stopping and preventing AIDS/HIV from spreading even more. Lots of young men and women who don’t have the required education do not even know about AIDS/HIV and is in risk of getting it very easily.

Education For All. (2016, Oct 15). Retrieved from https://studymoose.com/education-for-all-essay 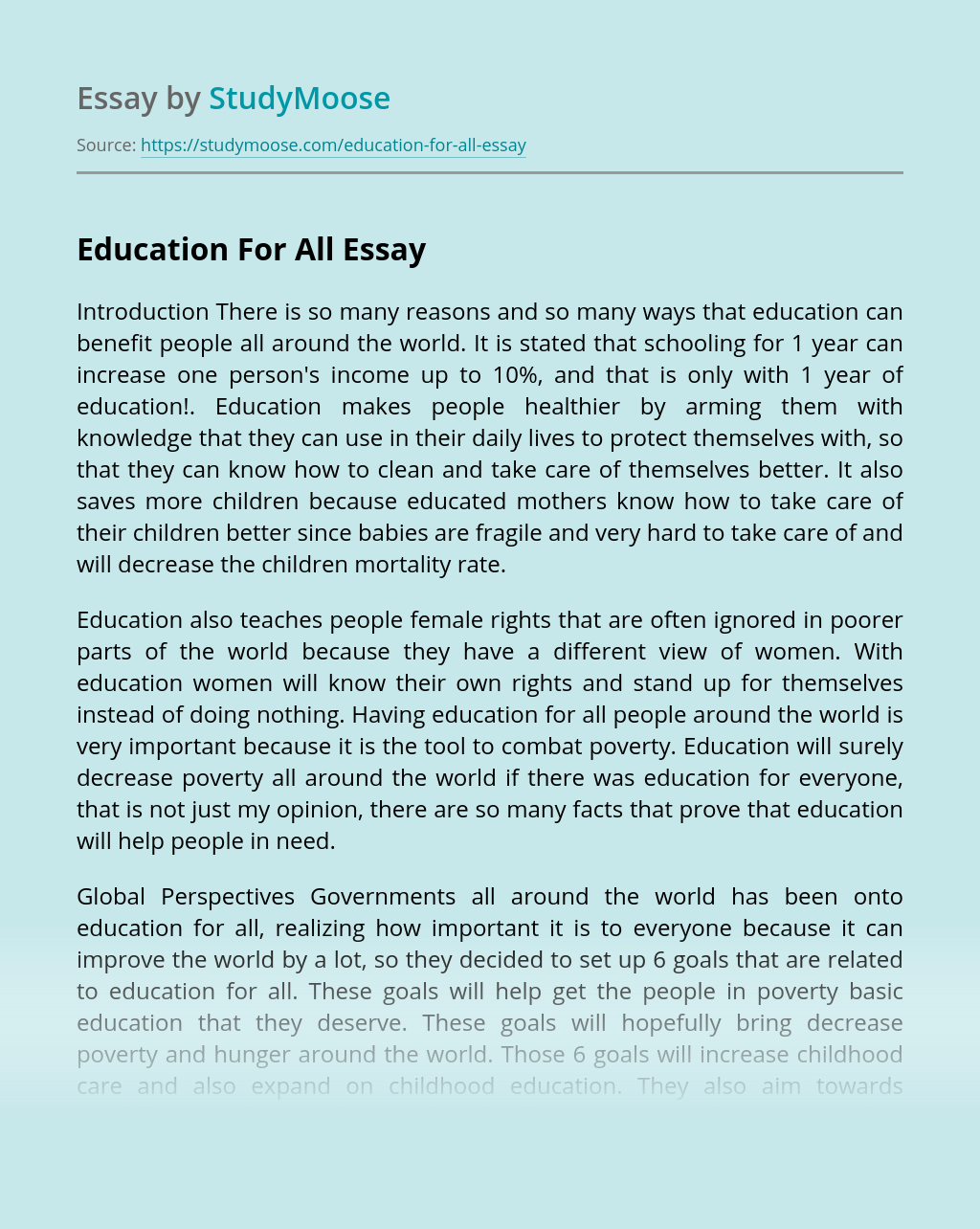